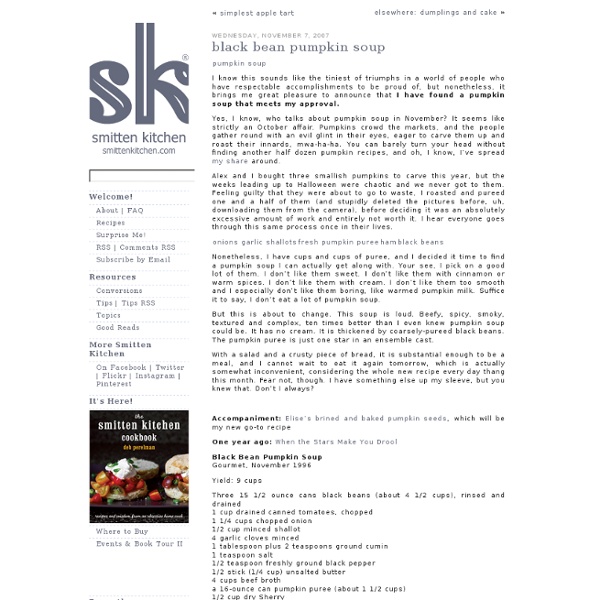 I know this sounds like the tiniest of triumphs in a world of people who have respectable accomplishments to be proud of, but nonetheless, it brings me great pleasure to announce that I have found a pumpkin soup that meets my approval. Yes, I know, who talks about pumpkin soup in November? It seems like strictly an October affair. Alex and I bought three smallish pumpkins to carve this year, but the weeks leading up to Halloween were chaotic and we never got to them. Nonetheless, I have cups and cups of puree, and I decided it time to find a pumpkin soup I can actually get along with. But this is about to change. With a salad and a crusty piece of bread, it is substantial enough to be a meal, and I cannot wait to eat it again tomorrow, which is actually somewhat inconvenient, considering the whole new recipe every day thang this month. Accompaniment: Elise’s brined and baked pumpkin seeds, which will be my new go-to recipe One year ago: When the Stars Make You Drool Yield: 9 cups

Vegan Stuffing Post: Recipe Trio. I hope you've already read my Vegan Stuffing 101 post, and now you are ready to continue my Vegan Thanksgiving Series by diving into three creative and delicious vegan stuffing recipes. This is the definitive post for vegan stuffing. Look no further. Where to "Stuff" the Stuffing. "Where to Stuff Your Stuffing" Options:#1: Simply scoop it into a casserole dish and cover tightly with foil.#2: Stuff into individual servings of baked mini squash.#3: Stuff into one medium-large (still has to fit in your oven) baked pumpkin - slice in half before serving. Baking Times for "Stuff it" Selections: If using a large casserole dish, bake at least 20-25 minutes at 400 degrees. What Bread to Use? Once you've decided where to stuff your stuffing and what bread to use, you can proceed with choosing a recipe. Recipe #1: Tempeh Bacon Shiitake Jalapeno Stuffing Directions: 1. Recipe #2: Butternut Tangerine Pecan Stuffing Directions: 1. Recipe #3: Apple Sage 'Sausage' Chestnut Stuffing Directions: 1.

apple and honey challah This month has came and has now almost gone and I’ve missed it entirely. It’s a shame, because September is my second favorite but less of a shame than it would be if I am still saying the same about October, which is my actual favorite. Nevertheless, I put my foot down and decided I absolutely, unequivocally would not let this month go without at least making you an apple honey challah. Due to my innate gift for impeccable timing (ha), I got the idea for this about two days after the High Holidays ended last year. So, for the better part of 12 months, I’ve plotted this spin on traditional challah and am still about six hours late on it. Typical. Honey challahs are surprisingly easy — you simply swap sugar for honey, and you can increase it for a stronger honey flavor. Friday 9/30 Do you live near NYC? Apple and Honey Challah One tip: If you measure your oil in your 1/3 cup measuring cup first, and then your honey, the honey will slide right out. Makes 1 round woven challah

Farro and roasted red pepper salad I Ottolenghi recipes This ancient variety of wheat, when accompanied by shamelessly bold flavours, has a unique nuttiness and a great texture. It deserves its healthy credentials, too, because some people who are intolerant to wheat can eat farro. Farro is sold whole, semi-pearled, pearled, which determines the time it will take to cook (anywhere between 15 minutes and an hour). When done, it should be tender but retain a real bite. If you can't get farro, use pearl barley and you'll still end up with a highly satisfying result. Thanks to Claudine Boulstridge. Method Put the farro in a pot of boiling water and simmer until just tender. Meanwhile, prepare the peppers. Whisk all the dressing ingredients in a bowl and set aside. Put the farro in a big bowl and add the peppers, olives, oregano, spring onion and most of the feta.

potato pancakes, even better It wouldn’tbeHanukah if I didn’t refresh my favorite, dead-simple potato pancake recipe. But it wouldn’t make for a very interesting story if I told the same one every year; in fact, I think they get better with each try because I continue to tweak them ever so much. This year, after finally making peace with my cast frying pan (coincidentally, over an “apple latke”) I cooked them in there, and will use no other pan for them as long as I live. In an ongoing, obsessive effort to create latkes that look precisely like the flying spaghetti monster/tiny piles of rope mops, I again attempted to create the longest strands of potato possible by placing them sideways in the feed tube of the food processor — the food processor not only saves a ton of time, it creates coarser, more visible strands. Next, I at last retired the sieve-pressing for a cheesecloth-squeezing. Finally, if you think that latkes are just for Hanukkah, with all due respect, you’re totally missing out. Or an appetizer.

Roasted Tomato Soup Recipe | Tyler Florence | Food Network Preheat oven to 450 degrees F. Wash, core and cut the tomatoes into halves. Spread the tomatoes, garlic cloves and onions onto a baking tray. If using vine cherry tomatoes for garnish, add them as well, leaving them whole and on the vine. Drizzle with 1/2 cup of olive oil and season with salt and pepper. Remove roasted tomatoes, garlic and onion from the oven and transfer to a large stock pot (set aside the roasted vine tomatoes for later). Wash and dry basil leaves, if using, and add to the pot. crispy potato roast I fell for a photo this week. It was on marthastewart.com and it looked like an accordion, or maybe a Slinky, of thinly sliced, crisped potatoes and my brain computed this as CHIPS. POTATO CHIPS MASQUERADING AS GROWN-UP SIDE DISH. Plus, I was looking for a gratin alternative for potatoes for my family’s Seder on Monday night and this fit the bill perfectly. If you have a mandoline, the prep on this is remarkably simple. The results are stunning, and it tastes, just as I had hoped and dreamed, half like potato chips and half like a fragrant potato roast. One year ago: Blue Cheese Scallion Drop BiscuitsTwo years ago: Pasta with Favas, Tomatoes and SausageThree years ago: Almond Cake with Strawberry-Rhubarb CompoteFour years ago: Black Bean Confetti Salad Crispy Potato Roast Adapted from Martha Stewart About the baking dish: My dish in the first photo is on the small side because I discovered that I’d only bought 2/3 of the potatoes I needed and scaled the recipe down.

Peruvian Quinoa Salad | A gift from the stars Step out under the sky tonight and scan the heavens. Seek out a star, winking in the darkness, livelier than all the rest. This, my friends, is the proud, playful star-sister who brought quinoa to South America. Legend has it that, long before hip, suburban health food stores stocked this comma-shaped seed, the Aymara people* of the Andes were given the gift of quinoa. “An Aymara Village on Lake Titicaca, Peru.” “Atacameños y Aymaras” (1874) It was the Aymara’s first harvest, near Lake Titicaca. The young man hid behind some bushes and waited. In those days humans could speak to the stars. Clang, clang, clang. The sound shook the still night air, startling the women. Entranced by this vision, the young man forgot about his potatoes; his only thought was to set eyes on the remarkable star-sister again. And this is exactly what the bird did. View of the Andes highlands (this section in Chile). All was well. A true gift from the stars. “Huandoy Mountain, Peru.” by Clarquitecto. Yes. Nope. She.

Homemade Ricotta Cook to Cook: Rinsing the pot with cold water before pouring in the milk will save you some serious cleanup! The reserved liquid whey can go into soups, stews and curries, and be used to cook pasta and rice. It will keep refrigerated up to 3 days. Keeps up to 3 days, covered, in the refrigerator. 1. 2. 3. What to Do with Homemade Ricotta: 1. 2. 3. 4. 5. 6. 7.