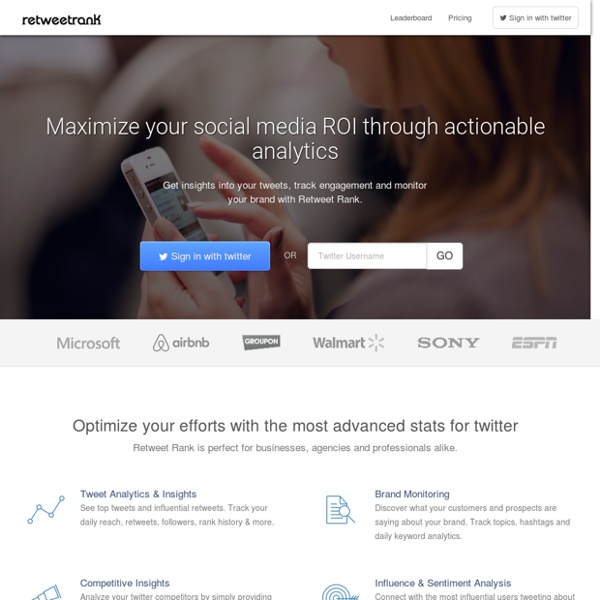 Twitter Analyzer - Learn More About your Twitter Followers Twitter Analyzer identifies the gender of your Twitter followers based on their profile picture. The user details are saved in a Google Spreadsheet. Do you ever wonder what is the demographics of people who follow you on Twitter. Twitter Tools for Community and Communications Professionals inShare5 Twitter is nothing short of a phenomenon. At the very least, it connects people to each other through a rich and active exchange of ideas, thoughts, observations, and vision in one, highly conducive ecosystem (known as the Twitterverse). The social fibers that weave together this unique micromedia network is strengthened by the expertise, respect, trust, admiration, and commonalities. 30 Very Useful Twitter Tools You Must Be Aware Of There are numerous ways of using Twitter for everything from business to fun. The key to using Twitter effectively is the use of tools. Without tools, Twitter can be overwhelming and difficult to fathom. There are numerous tools that allow you to sift through this massive resource of latest news, links and gossip.

The Demographics of Twitter Users [Study Twitter has more than 500 million users and is continuously growing, but who are all these new tweeters? Pew Research Center has released an Internet study that focuses solely on Twitter and includes some great user demographics. The study is based on the findings of a survey on Americans’ use of the Internet. The results in this report are based on data from telephone interviews conducted by Princeton Survey Research Associates International from January 20 to February 19, 2012, among a sample of 2,253 adults. Twitter is soaring among young adults 15% of all online adults in the U.S. use Twitter as of February 2012, and 8% are daily users.

indicadores de influncia no twitter by David Armano on Mar 28, 2011 Originally published as a Quora answer The NY Times recently reported what regular users of Twitter already know. Follower counts are an indicator of influence but not a very good one. And yes, followers can be and are gamed frequently with the assistance of shady web services. Twitter Archiving Google Spreadsheet TAGS v3 Jisc CETIS MASHe Important: Changes to Twitter API Because Twitter are making changes to their API this version of TAGS will stop working in March 2013. TAGSv5.0 is compatible with the new API and you should get it here! For existing TAGS users: What will happen to my existing TAGS sheets? When Twitter turn off the old API (test outages this March) all authenticated and unauthenticated search requests will stop working.

How to Turn Twitter Into a Dashboard-Style Web App This is a screenshot of Twitter. No gimmicks, no PhotoShop. (Click to enlarge.) I’ll show you a simple way to turn your experience on Twitter.com into one very similar to most Twitter web applications out there, such as Tweetdeck, Seesmic or Hootsuite. Some may prefer this solution since you will have access to all of your Twitter data – your profile, your followers, your settings, your lists and searches – all in one place.

That Can Be My Next Tweet: Generate Tweets Based On Existing Ones - Flock That Can Be My Next Tweet, as the name suggests, helps you generate Twitter status messages. It scans through your existing tweets and generates random messages by combining the words and phrases it finds relevant. You need to enter your Twitter username and click on “get your next tweet” to get the tweet. You may also post it to Twitter directly by hitting the corresponding button. The machine generated tweets, as you would expect, might not make sense (actually it doesn’t most of the time). But it does come up with a nice tweet now and then. Advice for editors on becoming conversational on Twitter Most editors using Twitter should try to be more conversational. They use Twitter primarily to post headlines and links to their staff’s stories. Posting links is a valid use of Twitter, but if that’s all you’re doing, especially if you’re just posting headlines with the links, you’re just getting started. Twitter has much greater value for improving your journalism and engaging with your community. As I’ve noted, too many newsroom leaders don’t use Twitter at all, but when they do, most start by sharing links to their staff’s stories.