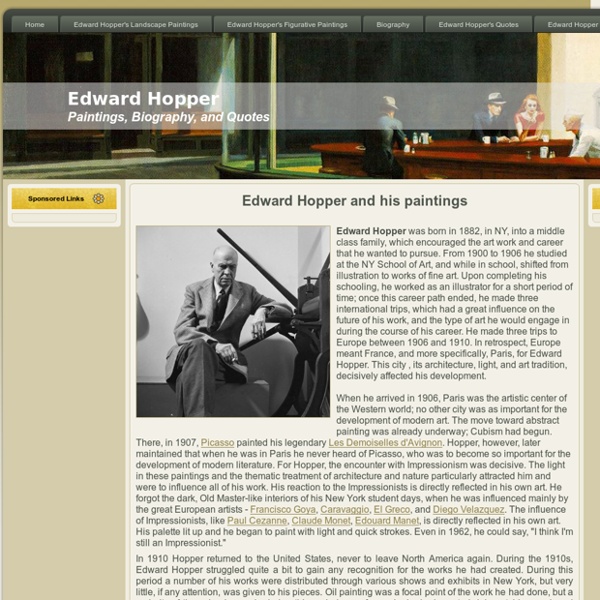 Edward Hopper was born in 1882, in NY, into a middle class family, which encouraged the art work and career that he wanted to pursue. From 1900 to 1906 he studied at the NY School of Art, and while in school, shifted from illustration to works of fine art. Upon completing his schooling, he worked as an illustrator for a short period of time; once this career path ended, he made three international trips, which had a great influence on the future of his work, and the type of art he would engage in during the course of his career. He made three trips to Europe between 1906 and 1910. In retrospect, Europe meant France, and more specifically, Paris, for Edward Hopper. This city , its architecture, light, and art tradition, decisively affected his development.

Artist's Physical Gestures Produce Beautiful Charcoal Drawings Using just her body and a piece of charcoal, New Orleans-based performance artist Heather Hansen bends and twists in fluid motions across the surface of paper to create beautifully rough symmetrical shapes and patterns. Her captivating performances involve dance-like movements that are just as much the main focus as the final, large-scale drawings. Watching her process is a mesmerizing experience where lines emerge from her many natural, physical gestures. Without hesitation, she repeats her movements and smears the lines together into the final, unpredictable works. She then lifts her body off of the page to reveal the one-of-a-kind pieces. Hansen quotes Joseph Campbell as part of her inspiration behind her work: "The goal of life is to make your heartbeat match the beat of the universe.

Turner Watercolour Painting papers J M W Turner (1775- 1851) was passionate about the papers which he used. They were always an integral part of his work whether for a speedy sketch or a highly finished watercolour. As a relatively wealthy artist in his lifetime he was able to define and have made many papers to his own specification. Edward Hopper Edward Hopper, an illustrated essay by artist and Deskarati art critic – Alan Mason - 1. Edward Hopper, Self Portrait, (1925-30) aged 43 to 48 Edward Hopper, (1882-1967), was an American painter who earned his living as a commercial artist for most of his adult life. Mark Jenkins // City Besançon Rome Rio de Janeiro Tudela London Dublin Oxford sketchbook c.1789 (J.M.W. Turner: Sketchbooks, Drawings and Watercolours) Walter Thornbury, The Life of J.M.W. Turner, R.A., 2nd ed., London 1876, p.24. A.J.

Nighthawks Nighthawks is a 1942 oil on canvas painting by Edward Hopper that portrays people sitting in a downtown diner late at night. It is Hopper's most famous work[1] and is one of the most recognizable paintings in American art.[2][3] Within months of its completion, it was sold to the Art Institute of Chicago for $3,000[4] and has remained there ever since. About the painting[edit] Josephine Hopper's notes on the painting[edit] Starting shortly after their marriage in 1924, Edward Hopper and his wife Josephine (Jo) kept a journal in which he would, using a pencil, make a sketch-drawing of each of his paintings, along with a precise description of certain technical details. Jo Hopper would then add additional information in which the themes of the painting are, to some degree, illuminated.

Guy Secretly Shoots Subway Passengers As 16th-Century Paintings You can find all sorts of people on the London Underground. You won’t however see anybody from the 16th century. Not unless you’re Matt Crabtree that is. William Turner, landscape art tutorial Learn to Draw Art Lessons Art Books Charcoal Oil Lessons Wetcanvas Drawing for Beginners The Great Falls of the Reichenbach William Turner