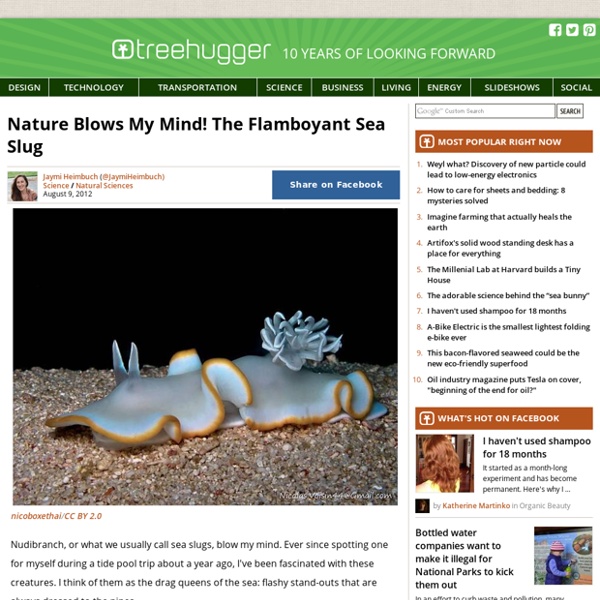 nicoboxethai/CC BY 2.0 Nudibranch, or what we usually call sea slugs, blow my mind. Ever since spotting one for myself during a tide pool trip about a year ago, I've been fascinated with these creatures. I think of them as the drag queens of the sea: flashy stand-outs that are always dressed to the nines. The one I found is a Hermissenda crassicornis -- the flashy little thing pictured below with bright pinkish-orange cerata waving like a feather boa and neon blue outlines around its tentacles. © Jaymi Heimbuch But this is not exactly an example of what all nudibranch look like. prilfish/CC BY 2.0 prilfish/CC BY 2.0 Elias Levy/CC BY 2.0 Bill Bouton/CC BY-SA 2.0 Derek Keats/CC BY-SA 2.0 See what I mean? From Wikipedia:"A nudibranch /ˈnjuːdɨbræŋk/ is a member of what is now a taxonomic clade, and what was previously a suborder, of soft-bodied, marine gastropod mollusks which shed their shell after their larval stage. You read that right -- over 3,000 species and more are discovered all the time.

Beautiful World of Sea Slugs-click on pic On land, slugs are far from nature's most beautiful creatures--but underwater, the family of shell-less creatures known as nudibranchs come in bright neons, glowing pastels, and vibrant primary colors. The 3,000 different kinds of nudibranchs get their color from the food they eat--and, in some cases, secrete the poisons from their prey to defend themselves against predators. The Fried Egg Nudibranch gets its name from the perfect yellow-and-white circles that line its back. These nudibranchs grow to about three inches long, and live in the waters of the Pacific and the Red Sea. ‘It was the worst mistake I ever made’ After having four babies in five years, Dawn Martin, like many thousands of women, began to suffer stress incontinence as she got older. It was acutely embarrassing to leak every time she coughed or sneezed and buying incontinence pads was humiliating. Desperate to sort the problem out she agreed to have a procedure called TVT – where a tape is attached underneath the bladder to strengthen it.

The adorable “sea bunny” - a nudibranch It’s round, and fluffy and has wiggly little ears! Sort of. These little sea creatures, affectionately dubbed “sea bunnies” have recently become social media celebrities. They’re actually sea slugs, and belong to the wild group of mollusks called nudibranchs. ‘It was like being stabbed with a shard of glass’: Woman left in a wheelchair after controversial incontinence surgery that’s destroyed thousands of lives A WOMAN was left needing a wheelchair for months after suffering severe side effects from incontinence surgery. Karen Griffiths, 51, began suffering problems with her bladder after she had children. The mother opted for a transvaginal tape (TVT), which is a mesh that is put below the bladder to help keep the internal organs in place so aiding stress incontinence. Far from helping her situation the treatment left her in severe pain, with claims TVT is flawed. The tape can come apart, with segments of it making their way into tissue in the body. This has been dubbed "the cheesewire effect" thanks to the harsh cuts that are caused internally, and it's what happened to Karen.

Tree Encyclopedia 2 clicks to really open Trees have three principle features that distinguish them from all other plants. First, they have a woody stem, roots and branches which do not die back in winter, but continue to grow year after year. From the moment of its germination, a tree remains visible; from the tallest Sequoia to the smallest garden fruit tree, this principle of growth remains constant. Thalidomide victims back mesh campaigners in bid to seek compensation and force safety probe STEVE Sinclair, who has endured more than 40 live-saving ops, begged Scottish politicians to stand by mesh victims. THALIDOMIDE survivors say mesh victims are being dismissed with the same tactics used to deny their injury claims more than 50 years ago. Steve Sinclair, who has endured more than 40 life-saving operations after his mother Myrid took just three Thalidomide tablets while she was pregnant, yesterday begged Scottish politicians: “Do the right thing. Stand by mesh victims and act before more lives are destroyed. “Don’t let the big pharmaceutical firms avoid their responsibilities. Make them compensate those women for what their products have done to them and pay for all the NHS costs needed to treat them.”

Might Alien Life Evolve Like the Incredible Octopus? by Natalie Shoemaker Consider the octopus: a creepy skeleton-less creature with limbs that have regenerative properties and a mind of their own. Its structure — inside and out — makes it like no other animal on earth. As a part of the Mollusca phylum, the octopus seems so far removed from its clam cousin. Neurobiologist Benny Hochner, from the Hebrew University of Jerusalem in Israel, talked about this oddity in an interview with Alison Abbott from Nature: “Very simple molluscs like the clam — they just sit in the mud, filtering food. Pensioner joins campaign to ban operation after being left in 'intense' pain A Tongham woman who has suffered years of debilitating pain since undergoing a controversial procedure for incontinence has joined a campaign to outlaw the operation. Kathleen Parrish has added her voice to a chorus of furious patients who say they were not forewarned about the dangers of having a TVT mesh implant, nor that the device could not be safely removed. The 70-year-old Carfax Road resident travelled to London's Chelsea and Westminster Hospital in 2003, hoping the operation would solve her condition. Instead, 14 months after the procedure, she began experiencing intense groin, back and leg pains, which have now grown so bad she can hardly walk.

these amazing tiny spiders - 2 clicks Sparklemuffin and Skeletorus sound like names my daughters would choose for a stuffed animal or an avatar, but no, these are the real names given by scientists to two newly discovered Peacock spiders. Peacock spiders are known for their flamboyant colors and dance steps, so entomologist decided to have fun with their names too. Skeletorus, which is more formally known as Maratus sceletus, was named for its unusual black and white skeleton-like pattern. Injured by Mesh Implant by Suki Mann Be the first to like this update 01/18/2015 by Suki Mann Dr Shlomo Raz M.D. USA I wrote to Dr Raz following surgery in the UK - I had been promised a full removal of the 22cm TVT-O, but after surgery found that only 6cm the mid section was removed.

3,200 Year Old Tree Never Been Captured In A Single Image... (Distractify) Cloaked in the snows of California’s Sierra Nevada, the 3,200-year-old giant sequoia called the President rises 247 feet. Two other sequoias have wider trunks, but none has a larger crown, say the scientists who climbed it. The figure at top seems taller than the other climbers because he’s standing forward on one of the great limbs. Campaigners delighted about a report that shows mesh, used by surgeons in hospitals across Cambridgeshire, degrades while inside the body 16:16 10 September 2015 Kath Sansom Dr Robert Bendavid, among authors of reports outlining mesh complications Archant Campaigners raising awareness about an operation that uses a plastic mesh sling to support weakened pelvic floor muscles have welcomed a new report proving the plastic degrades inside the body. Sling The Mesh Facebook campaign