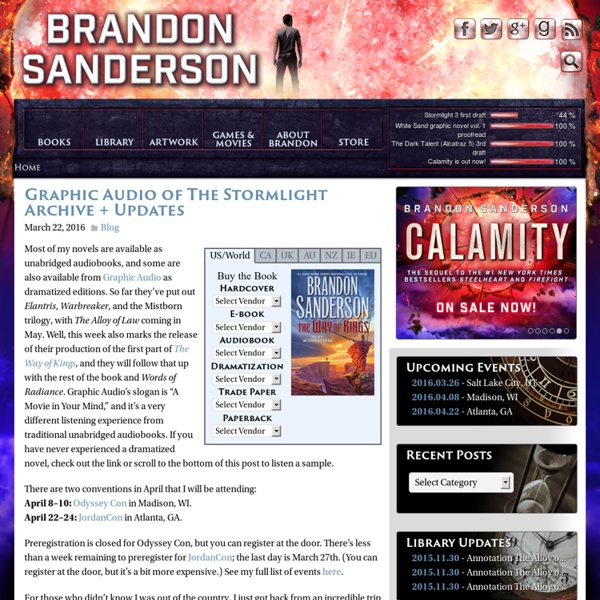 Mistborn Introduction MISTBORN is the name of Brandon’s epic fantasy trilogy. The first book is technically MISTBORN: THE FINAL EMPIRE, though people just tend to call it MISTBORN or MISTBORN 1. The entire series consists of THE FINAL EMPIRE (2006), THE WELL OF ASCENSION (2007), and THE HERO OF AGES (2008). Synopsis I came into this book with two big ideas for the plot. The second idea was to write a story about a world where the good guys lost. Hence, MISTBORN. Anyway, that’s the ‘back of the book’ movie trailer type explanation. During development, the story moved further and further away from the heist. The book has a little of everything for everyone. Reviews Booklist said the following: “The Sliver of Infinity, the Lord Ruler, is the locus of religious and temporal order in a world in which the skaa are slaves or worse. The Romantic Times gave the book full marks and said “The characters in this book are amazingly believable. “Mistborn utilizes a well thought out system of magic. Robin Hobb

The Bujold Nexus - The Lois McMaster Bujold Homepage Jacqueline Carey's Official Author Site George R. R. Martin's Official Website Elantris Introduction ELANTRIS was Brandon’s first published book. A stand-alone epic fantasy novel, the book won the Romantic Times award for best epic fantasy of 2005, was chosen by Barnes and Noble.com editors as the best fantasy or sf book of the year, and is forthcoming in fourteen languages (about half of which have been released as of September of 2007.) Synopsis It’s always interesting to describe your book to people, since a novel like this, at 200,000 words, is going to mean very different things to different people. Tor classifies this book as an epic fantasy. The setting is the city of Elantris and the surrounding suburbs. The book follows the experiences of three people as they interact with the people of Elantris. The three stories intertwine as the truth of what happened to Elantris, and its inhabitants, ten years ago is unearthed. Reviews About the book, Publisher’s Weekly (which gave it a starred review) had the following to say: Best of all, the story is complete. Orson Scott Card

Terry Goodkind: The Official Author Website Patricia C. Wrede's Blog One of the most interesting things, to me, about reading old (like, 1930s or earlier) how-to-write books is the way they look at viewpoint. Modern writing texts focus mainly on who the viewpoint character is, or on the type of viewpoint (first, second, or third-person) and how Read more → I’m still working on revisions, and one of the first things I did was to make what I think of as the real outline of the story. So this is another open mic week – chat, make announcements, complain about your writing, whatever. So I am currently stuck in the middle of editorial revisions on the Work-In-Process, and have been for an enormously long time, mostly due to outside factors. Plot skeletons seem to be very popular as planning tools these days. OK, the power is back on and they’re coming to remove the giant tree later this week. We had a nasty storm Sunday, and I lost power, phone, and internet. Writing isn’t easy. It’s been six weeks, so time for another open mic!