Self-portraits done to a different drug every day 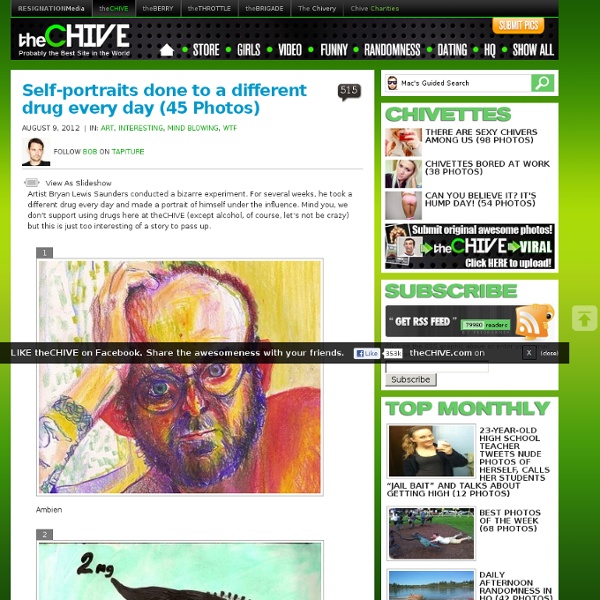 Some Bizzare and Odd things around us... Beauty of the nature lies in viewer’s eyes. A photograph is just a way to show or represent that beauty. Here is a bunch of some wonderful pictures which are not only the example of beautiful photography but are also a photograph of some miracles happening in the world. You can also call it the creativity and innovation of photographer’s mind. Some are really very cute and heart touching. I am simply in love with these photographs and I am sure you will too. Gibraltar Airport is one of the most extraordinary airports around the world. Morning Glory – kind of clouds observed in the Gulf of Carpentaria in northern Australia. The river above the river: Magdeburg Water Bridge, Germany. Heavy fog in Sydney, which enveloped the whole city. Skyscraper-Crescent Crescent Moon Tower (Dubai). Photo of storm in Montana, USA, 2010. Lighthouse guard in Mare, France must be one of the most courageous people on the planet! In northwestern Montana, USA. View of the sunset from inside the wave. Lena Pillars.

An Austrian Artist Has Completely Reinvented The Door Austrian artist Klemens Torggler has reinvented the door with his latest project. Called the Evolution Door (which we first spotted on the blog Colossal), the 4-panel door opens and closes elegantly as though it's made of pieces of paper. Roggler calls it a "flip panel door" (or "Dryehplattentur"). Torggler has a few variations on this door, one with the origami-esque triangles that fold out to help the door move, and another system with rods that rotate two square panels. Currently the door is a prototype, and comes in a glass, steel, and wood version. Watch the triangle version in action below: And here's the steel door with rod system: Join the discussion with Business Insider Refrain from posting comments that are obscene, libellous, slanderous or inflammatory, and do not indulge in personal attacks, name calling or inciting hatred against any community.

How To Mix Chalkboard Paint in Any Color We love using chalkboards as backdrops for displays and parties (like this one here!). So we were super excited to learn that you can create your own custom colors-and it's really easy! We first learned how from Martha Stewart whose tutorial you can read here. She recommends that you use latex paint, but we tried it out with acrylic paints with much success. Here's how you too can create your own chalkboard paint... Supplies: 1/2 cup acrylic paint (choose any color you like, or mix colors together to make the perfect shade!) 1. 2. Once your chalkboard has fully dried be sure to slate the surface before using it for the first time. Have fun creating any color combination you like!!

Theremin - A Playable Touch Synthesizer Using Web Audio API ✖Update: 7 February 2014 Thanks to everyone for sharing! Over 100,000 people have played on the theremin in the last 3 days which is absolutely amazing. Due to a large number of requests, we've began working on a record function as well as an offline version of the app which will be available soon. Feel free to either subscribe at the bottom of the page or follow us on Facebook & Twitter for updates and future toys. More info The web audio theremin is a touch friendly & responsive audio synthesizer built in javascript using the Web Audio API with HTML5 canvas. Feel free to get in contact with me here: luke@femurdesign.com If you are using Safari or Chrome, please update your browser to the latest version. This synthesizer uses latest Web Audio API technology which is currently supported in Chrome, Safari, Opera and iOS Safari 6+.

30 Best Room Pictures of the Week - June 02st to June 08th, 2012 1. I really love this pool 2. 3. 4. 5. 6. 7. 8. 9. 10. 11. 12. 13. 14. 15. 16. 17. 18. 19. 20. 21. 22. 1900 Inn on Montford in Asheville, North Carolina 23. 24. 25. 26. 27. 28. 29. 30. The Privacy Worm Turns: Now You Can Spy On The NSA Instead of cursing the darkness of our surveillance state, one agency is lighting a candle of sorts, shining a spotlight on the NSA's spying program, or at least on the NSA itself. As part of The Day We Fight Back, a February 11th protest aided by open-internet advocates such as Mozilla and Reddit, Belgium-based agency Happiness Brussels launched a project called Spy on the NSA. True to its title, the new initiative allows users to surveil the agency whose clandestine initiative Edward Snowden revealed in 2013 to be surveilling us all. “It’s basically a reaction to the constant stream of NSA related news,” says Michael Middelkoop, one of the two creators, along with Sharif Abd el Mawla. “Every day there are reports of them spying on different levels and having access to all this personal data. Michael & Sharif's new initiative responds to current world events in the same sly manner they reacted to unwanted trends in advertising last year with the Instead of a Lion project.

RANDOM RADNESS VOL.381 We all enjoy having our eyes gently massaged by awesome and pointless images, so whether it’s rad or just plain random, you can find it here in Random Radness. Remember to follow us on our Instagram @theshockmansion – Enjoy! Why Nikola Tesla was the greatest geek who ever lived Additional notes from the author: If you want to learn more about Tesla, I highly recommend reading Tesla: Man Out of Time Also, this Badass of the week by Ben Thompson is what originally inspired me to write a comic about Tesla. Ben's also got a book out which is packed full of awesome. There's an old movie from the 80s on Netflix Instant Queue right now about Tesla: The Secret of Nikola Tesla. It's corny and full of bad acting, but it paints a fairly accurate depiction of his life.

15 Photos Of Most Dangerous Walkway in the World Did you ever seen such a dangerous walkway..?? El Caminito del Rey (also known as The King’s Walkway) can be considered most dangerous walkway in the world. El Caminito del Rey was built in 1901 as a connection between the power plants of Chorro Falls and Gaitanejo Falls. It took four years to finish and in 1905 Alfonso XIII, King of Spain, crossed the walkway for the inauguration, thus giving it its name, The King’s Walkway. Built along the steep walls of a narrow gorge, in the Malaga region, El Caminito del Rey has deteriorated severely in the last years and after four people died crossing it, in 1999 and 2000, the authorities decided to close it off to tourists. It’s only 1 meter wide and it stands 300 meters above the river floating in the area. Via BezBrige