Pam Warhurst: How we can eat our landscapes 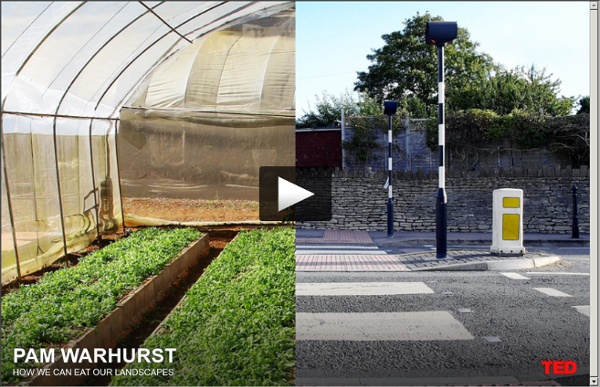 How cities make us smarter: Ed Glaeser at TED2012 Ed Glaeser is a economist at Harvard, and the author of Triumph of the City, and as his business casual look he wears a bow-tie with ice-cream cones. He is also one of the world’s experts on the nature of cities, and he was invited to set the stage for the TED2012 wish. “At their heart,” he says, “cities are the absence of physical space between people.” Glaeser talks about how, in the 19th century, Americans moved into the vast continent, and spread out. More than half of humanity now lives in cities, and it’s been incredible successful. In Glaeser’s youth in New York City in the 1970s, it really seemed like cities were dying, “it really seemed possible that all of America’s older cities would revert back to some planet of apes like wilderness” After a Boeing layoff in Seattle, two jokers put up a sign saying, “Will the last person to leave Seattle please turn out the lights.” All of that decline was because it looked like cities had lost their economic reason for being: Transportation.

Pamela Warhurst Pamela Janice Warhurst CBE (born 1950) is a British community leader, activist and environment worker best known for founding the voluntary gardening initiative, Incredible Edible, in Todmorden, West Yorkshire.[1] In 2009, Prince Charles visited the project in support.[2] Warhurst is currently Chair of Incredible Edible[3] and was formerly Chair of Forestry Commission Great Britain,[4] which is the largest land management commission in the country. She is also a Fellow of the Royal Society of Arts & Manufacturing and Chair of their Yorkshire region, and is an Honorary Fellow of Landscape Institute. In 2005, she was appointed the Chair of Pennine Prospects, a regeneration company focusing on the South Pennine region of the United Kingdom.[7] In the New Year Honours 2005 Warhurst was appointed as a Commander of the Order of the British Empire (CBE), for services to the environment.[8][9] Warhurst lives in Todmorden, West Yorkshire. References[edit] External links[edit]

Whatdoestheinternetthink.net Urbanization Origin of Cities: Some Introductory Points The City is a relatively recent form of social organization. Homo sapiens, the present human form has existed on earth for about 200,000 years, but cities have existed for less than 10,000 years. Jericho in about 7000 B.C. grew from village to a "city" of about 3,000 3,500-4,000 B.C. first large cities (population of about 25,000) were established in Mesopotamia. A "city" refers to a place of relatively dense settlement -- dense enough so that city residents can not grow their own food. Urbanization refers to a process in which an increasing proportion of an entire population lives in cities and the suburbs of cities. Urbanization of First World Societies In the United States, about 5% of the population lived in cities in 1800, but about 50% of the population lived in cities by 1920. Today about 80% of the US population lives in cities and suburbs. How many major US cities can you locate in this satellite photo?

Kevin Danaher Dr. Kevin Danaher is a co-founder of Global Exchange (1988), co-founder of FairTradeUSA (1997), founder and Executive Co-Producer of the Green Festivals (2001), and Founding Executive Director of Friends of SF Environment (2012). His 1985 PhD in sociology from the University of California at Santa Cruz was based on his dissertation, “The Political Economy of U.S. Described by The New York Times as the “Paul Revere of globalization’s woes,” Dr. Kevin has published articles in the Washington Post, the Los Angeles Times, the San Francisco Chronicle, the International Herald Tribune, Harvard Educational Review, the Nation, and many others. Lectures & Seminars Dr. Sustainability Can Save Humanity from Itself: Every biological system on the planet is collapsing: topsoil is eroding, forests are being clearcut, thousands of species are going extinct, the glaciers are melting, the polar ice caps are melting, ocean levels are rising, and global warming is creating climate chaos. Publications

Le potager urbain - Framasoft Framafox The Mihai Eminescu Trust The Manor was built by the Hungarian princely family, Apafi, probably in the 15th century. It is most unusual to have a manor house in a Saxon village - Mãlâncrav and only two or three other villages were governed by Hungarians. Archaeology reveals that the Manor House was built in several phases. Fifteen inventories have come to light in Budapest. All the inventories were found in the Hungarian State Archives, twelve of them from the Transylvanian Governmental Archives, and three from the Bethlen Family Archives. Much of the information is taken up with descriptions of locks, doors, furniture, paintings on the interior walls etc. In the late 18th century the Apafi family died out, and the property passed to the Bethlen family. The deeds of the house record that in the 1920s it was sold by its last private owner to the Evangelical village community. In late 2000, the Trust helped the Evangelical community to establish its legal title over the house.

Proper Flower Etiquette for Valentine's Day Happy Valentine’s Day, Infographers! Although many criticize this day as a hallmark holiday, I have always viewed it as a day to celebrate the friends, family and loved ones in your life. While one shouldn’t need a holiday to express love, it sometimes helps remind you to slow it down and recognize all of the love in our busy lives. Lets get to loving! Flowers are such a sweet gift for both lovers and friends. Share This Infographic Get Free Infographics Delivered to your Inbox