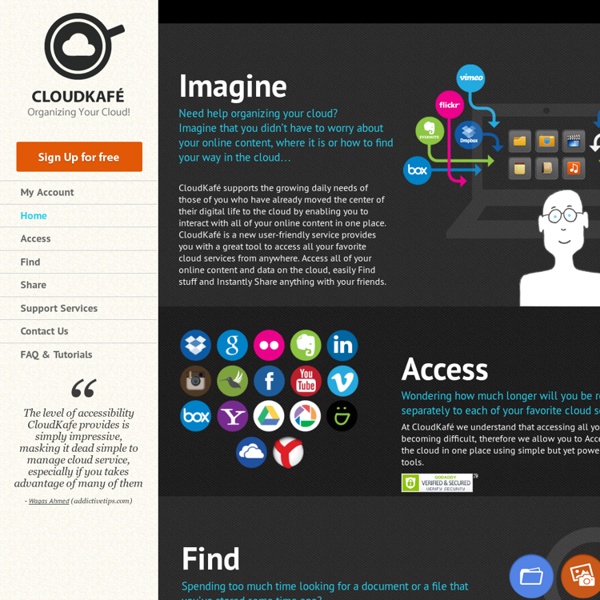 CloudKafé supports the growing daily needs of those of you who have already moved the center of their digital life to the cloud by enabling you to interact with all of your online content in one place. CloudKafé is a new user-friendly service provides you with a great tool to access all your favorite cloud services from anywhere. Access all of your online content and data on the cloud, easily Find stuff and Instantly Share anything with your friends.

Firefox OS Simulator – previewing version 3.0 Three months ago we were proud to release the 1.0 version of the Firefox OS Simulator. We’ve made a lot of progress since, and version 2.0 came out about a month ago (latest official version). Now, moving forward, we’d like to present and introduce you to a preview of the upcoming 3.0 version! We discussed whether we should talk about this new version yet, since it’s a bit rough around the edges, but we decided to give it a go for two reasons: CloudCube View, Search, Share, manage and Edit all your photos and documents in one place. Both online and on device. Now you can Bump and share your cloud files with your friends. Simply pick a file or a photo from Dropbox, Facebook, SkyDrive or other online services and select the Bump & Share option. Primadesk has to be installed on the receiving device.

Download Should I Remove It? FREE "This program manages to do a good job of making sure that your computer is free from bloatware and programs that you don't need." (Best Of Media Editors Review) Tom's Guide "Should I Remove It?" is 100% FREE, and does not bundle any additional software, that means no adware, spyware, malware or other types of shareware or free-ware. PopClip for Mac PopClip appears when you select text with your mouse on your Mac. Instantly copy & paste, and access actions like search, spelling, dictionary and over 100 more. Download Every meteorite fall on earth mapped Turn autoplay off Edition: <span><a href=" Beta About us Today's paper Test BitTorrent Sync (Pre-Alpha) Test BitTorrent Sync (Pre-Alpha) by BitTorrent on We like it when things work together. So we’ve been working on a new distributed syncing product to help manage personal files between multiple computers.

Record Skype video and audio calls It is the first free Skype video call recorder in the world for recording Skype calls without any limitations. With its help one may record Skype calls in the following modes: - picture-in-picture (the program records audio and video of all sides of the conversation); Access remote disk over net using SFTP protocol and map it to local drive letter - SFTP Net Drive With SFTP Net Drive you can work with the remote file system as if it were a local disk drive, given that the remote system supports SFTP protocol. SFTP protocol provides an encrypted channel for file upload and download and also for remote file and directory operations (such as create and delete directories, move and rename files etc). SFTP Net Drive 2.0 comes in Free and more feature-rich Professional versions (see comparison chart for details). It can be used on Windows 8 (x86 and x64 systems), Windows Windows 7, Vista, XP, 2012 Server, 2008 R2 Server, 2008 Server and 2003 Server You are welcome to post your ideas and suggestions regarding functionality of SFTP Net Drive to Wish List. To get acquainted download your own copy to use SFTP Net Drive for free.