ScienceBlogs - Where the world turns to talk about science. 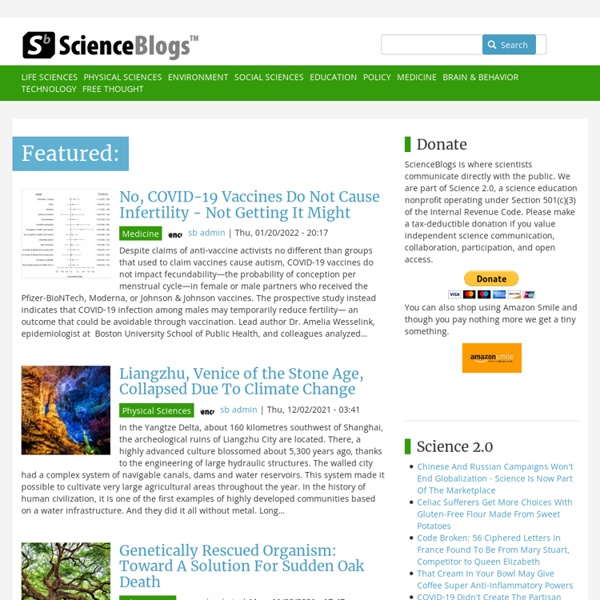 So, the bad news is that it is looking increasingly likely that the world will experience a very strong El Nino event this 2014-2015 winter (winter in the N. hemisphere, summer down under). There is even talk of a super-El Nino, one to rival 1998′s phenomenal event. Lots of good information on that here at… The last hurricane season in the Atlantic was anemic, being one of least active periods on record. This was attributed to extra dust blown off the Sahara which inhibits hurricane development. Right now, the various forecasting agencies around the world are agreeing that there is a greater than 50% chance, perhaps a 70% chance of…

August 26, 2014: Do we live in a 2-D hologram? Press Release August 26, 2014 Do we live in a 2-D hologram? Confirmation bias Tendency of people to favor information that confirms their beliefs or values Confirmation bias, also known as myside bias, is the tendency to search for, interpret, favor, and recall information in a way that confirms or supports one's prior beliefs or values.[1] People display this bias when they select information that supports their views, ignoring contrary information, or when they interpret ambiguous evidence as supporting their existing attitudes. The effect is strongest for desired outcomes, for emotionally charged issues, and for deeply entrenched beliefs.

The History of Sound Cards and Computer Game Music Jul 13, 2012 All modern computers have the ability to play high-quality digital sound, thanks to the presence of a dedicated sound card or an audio chip on the motherboard. Today’s computers produce lifelike, realistic audio, enabling us to listen to digital music collections, watch online videos and play action-packed games. However, the audio capabilities of today’s computers are the culmination of decades of development, and it took a significant contribution from the computer game industry to get us here. Without that contribution, anyone who isn’t a professional musician might still be listening to little more than beeps on his or her computer today.

Synchronicity Synchronicity is the occurrence of two or more events that appear to be meaningfully related but not causally related. Synchronicity holds that such events are "meaningful coincidences". The concept of synchronicity was first defined by Carl Jung, a Swiss psychiatrist, in the 1920s.[1] During his career, Jung furnished several slightly different definitions of it.[2] Jung variously defined synchronicity as an "acausal connecting (togetherness) principle," "meaningful coincidence," and "acausal parallelism." He introduced the concept as early as the 1920s but gave a full statement of it only in 1951 in an Eranos lecture.[3]

21 Terrifying Deep Ocean Creatures Scary Seas: 21 Terrifying Deep Ocean Creatures Article by Marc, filed under Destinations & Sights in the Travel category. The last true frontier on Earth is deep in the ocean. Any expedition to the dark depths is incredibly expensive, yet invariably comes back with a host of newly discovered species that are about as alien to land dwellers as it’s possible to get on this planet.