MARS Greeley Haven 360 Panorama - Round the world travel from panoramas.dk 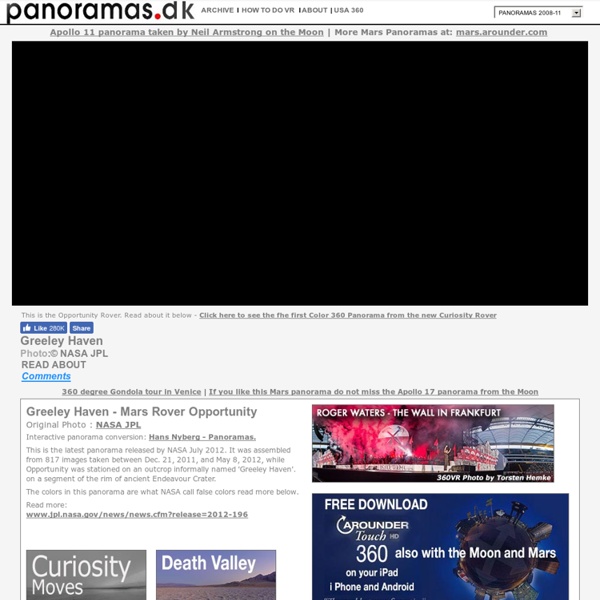 Important info about Copyright: All panoramas featured at panoramas.dk are copyright the individual photographers. Linking directly to the movies Quicktime or Flash is strictly forbidden. If you which to use any of the panoramas for any purpose, commercial or editorial you are requested to contact the photographer who has the copyright and is listed on all fullscreen pages. Links to panoramas.dk are welcome. You are allowed linking directly to the panoramapages using a small screenshot as long as it is used directly as a link or associated with a link . Please also provide the name of the photographer and a link to the homepage

100 Very Cool Facts About The Human Body The Brain The human brain is the most complex and least understood part of the human anatomy. There may be a lot we don’t know, but here are a few interesting facts that we’ve got covered. Nerve impulses to and from the brain travel as fast as 170 miles per hour. Ever wonder how you can react so fast to things around you or why that stubbed toe hurts right away? It’s due to the super-speedy movement of nerve impulses from your brain to the rest of your body and vice versa, bringing reactions at the speed of a high powered luxury sports car.The brain operates on the same amount of power as 10-watt light bulb. Footwear and accessories Home » Products » CLASSIC This patented Vibram FiveFingers® design takes a minimalist approach to barefooting. Non-marking Vibram® TC1 performance rubber soles protect your feet and provide a sure grip over a variety of terrain.

Internships at earthship.com Internships The Earthship Intern Program is a 3 week long hands-on learning experience at the Earthship global headquarters in Taos, New Mexico. Interns learn Earthship design concepts and building techniques with the best Earthship builders in the world, in the original Earthship community,.

Versailles Gallerie des glaces - Panoramiques 360 -panorama photo-360 degree QTVR copyright @ Hans Nyberg - panoramas.dk · www.qtvr.dk · www.360-foto.dk · www.virtualdenmark.dk · Privacy Policy I panoramas.dk is hosted by: VRWAY Important info about Copyright: All panoramas featured at panoramas.dk are copyright the individual photographers. Linking directly to the movies Quicktime or Flash is strictly forbidden. Rose Marcus, evolutionary astrologer, Vancouver Month’s Overview: September Astrolink Despite the obstacles or work that lie ahead, September opens with a fairly smooth running week. Sept 1 to 27, Mercury in Libra seeks cooperation, peace, and justice. Sept 5 to 29, Venus in Virgo feels her way onto a healthier track. Along with the sun in Virgo, the trio set a productive backdrop.

Water Wigs on the Behance Network We just finished shooting a new project we call Water Wigs. The concept is simple and it is another visual exploration of something new and totally different. We found a bunch of awesome bald men and hurled water balloons at their heads, to capture the explosion of water at various intervals. The result a new head of of water hair! *Venus Transit* Astrology & Symbolism: June 5th -June 6th, 2012 : The Return of the Feminine! I’m sure you have been hearing about this rare astronomical event called a VENUS TRANSIT which is happening on JUNE 5th, 2012 right after the LUNAR ECLIPSE/ FULL MOON in Sagittarius on June 4th, 2012! What is happening? Â In most basic terms, Venus will be moving across the face of the sun which will appear like a small black dot in front of the sun. This occurance is called a “Venus transit” and happens in pairs, with 8 years in between. The first one (in our lifetime) occurred in 2004 and the second one is June 5th!

Useful Ideas and Layouts to Create a Photo Gallery Wall My most popular post to date that you, my awesome readers, just swoon over is how to create a photo wall display. This post alone has received well over 70,000 views and today I’m sharing even more great ideas and layouts to create your own photo gallery wall. Knowing where to begin when creating a montage of photos can often be intimidating, so I’ve gathered some handy examples on how to find the right balance and layout for various sized photos in all the different areas of the home. Here comes a long post with alot pictures, but it’ll be worth scrolling all the way through…

Aerial Photographs of Volcanic Iceland by Andre Ermolaev At first glance these photos by Andre Ermolaev look like twisting abstract paintings, but in reality are aerial photos of rivers flowing through Iceland’s endless beds of volcanic ash. Given its name and stereotypical depiction it’s somewhat surprising to learn that the small country named after ice is home to no less than 30 active volcanic systems. You’ll remember the eruption of the massive Grímsvötn volcano just last year that spewed some 120 million tons of ash in the first 48 hours and snarled air traffic for days. Of his photographs Ermolaev says: Iceland is a wonderful country; I would even say that it is a true paradise for all the photo shooting-lovers. But what has become a real discovery for me is the bird’s eye view of the rivers flowing along the black volcanic sand.

Les Téléchargements - Outils de Xplode - AdwCleaner Got it ! This website uses cookies to ensure you get the best experience ever, we need those cookies in order to deliver our services. More information AdwCleaner v5.019 Follow 112 Early 1900s Postcards Show Off Primitive 'Photoshopping' Skills 'Bringing in the Sheaves., A Common Scene On An Okla Farm.' Kansas City, Missouri. William H. Photographic Collages Suspended in Plexiglas Auckland-based artist Peter Madden gleans found images from old encyclopedias, back issues of National Geographic, and nature books to create his dense and nearly psychedelic collages suspended in perspex, also known as ‘safety glass’. Of his work Madden says “I consider myself a ‘Sculptographer’; a ‘post-conceptual photographer’. A mediator between genres and dimensions, between you, the other and I. I suppose I am an altogether different collagist, maybe a collagist of difference.”

Starry Night: Light Installations by Lee Eunyeol Photographer Lee Eunyeol constructs elaborate light installations that appear as if the night sky was flipped upside down with glowing stars and planets nested inside tall grass or between deep earthen cracks. Though Lee does not have a website I can quote his artist statement I received via email: Starry night expresses private spaces given by night and various emotions that are not able to be defined and described in the space.