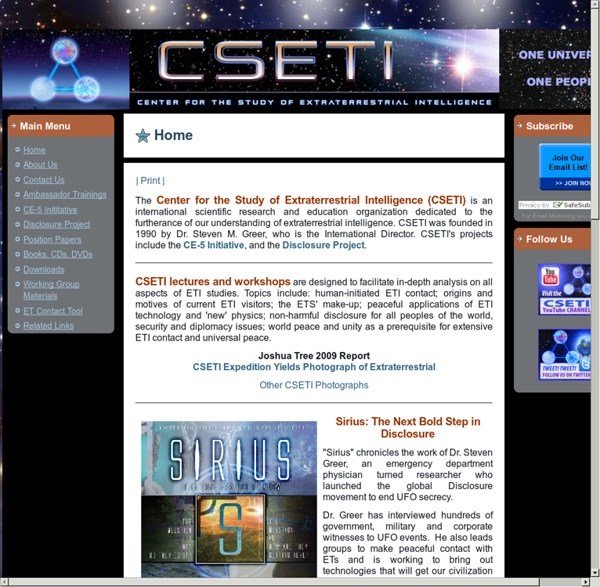 UFO*BC HomePage Canada's X-Files | UFO News Articles and Editorials Government of Canada Provides Open Access to UFO X-Files The Toronto Canada based independent news agency ZlandCommunications, has learned that the Canadian government under the leadership of the Rt. Hon. Prime Minister Stephen Harper has provided open access to approximately 9,500 UFO files. These files can be found at: Canada's UFOs: The Search for the Unknown. The Canadian web site states, “These documents were accumulated between 1947 and the early 1980s and represent all records filed with the federal government on UFOs. There are approximately 9,500 digitized documents in a variety of formats, including correspondence, reports, memos and procedures. These files reside at the Library and Archives Canada web site. 1. 2. 3. 4. Canada’s UFO X-files indicate Canadian government officials have been involved in attempts to make sense of the UFO matter as far back as 1947 and possibly earlier. Our thanks to Exopolitics Toronto! For More Information: Victor Viggiani B.A.

CANAIDAN UFO News Articles Welcome to PSICAN's Ufological section devoted to experiences and the study of things involved with UFOs and related phenomena. This section will include UFO news, articles, and editorials. Have you seen a UFO or have encountered something that you think might be UFO related? If you wish to report a sighting or experience with a UFO or something you feel is "UFO" related, please click here and a window will open with a form for you to fill out. Your information will be kept strictly confidential (only seen by yourself and PSICAN investigators) and never published without direct consent. You may also email us at admin@psican.orgThis e-mail address is being protected from spambots.

The Canadian UFO Survey Canadian UFO sightings on the rise, merit study Cover of the 2011 Canadian UFO Survey. (Credit: Ufology Research) A recent study concluded that 2011 was a near-record year for UFO sighting reports in Canada. The Daily Mail explains that “the majority of sightings were simply street lights or aircraft,” but the study concluded that “many people continue to report unusual objects in the sky, and some of these objects do not have obvious explanations.” According to the report, “Many witnesses are pilots, police and other individuals with reasonably good observing capabilities and good judgement.” The study suggests several possible explanations for the increase in the number of UFO sightings: The group behind the study concludes that the rise in the number of UFO sighting reports “suggests a need for further examination of the phenomenon by social, medical and/or physical scientists.”

Earthfiles.com Headline News Black Projects: The Hole where 400 Billion of US Tax Dollars Goes Every Year In this interview with Kerry Cassidy of Project Camelot, Michael Schratt shows and tells about the aircraft that the government built without our knowledge, with our money, since at least the 1950s. These recently declassified and still classified or outright denied projects are fascinating testimony to just SOME of the advanced technologies developed and hidden from us—no doubt under the stamp “national security”. Michael shows us a binder of evidence he collected from test pilots of the secret craft, others he’s spoken with, and research he’s done on his own from government sources—with LOTS of photos, diagrams and conceptual drawings. He speaks of the Honda Stealth bombers and other black budget aircraft as well as technologies that make them able to cruise at 90,000 feet (twice that of a commercial airliner) at high speed, slip through radar undetected; one of which uses the rear window of a Corvette as a windscreen. Here’s Part 1: Part 2: Like this: Like Loading...

UFO Canadian Government Files Within the vault of Library and Archives Canada there exist files from four government departments that were involved with collecting data and conducting investigations on unidentified flying objects (UFOs). The Department of Transport, Department of National Defence, the Royal Canadian Mounted Police and the National Research Council all dealt with reports, sightings and investigations of UFOs across Canada. Each department had different interests and goals. Conduct your own UFO investigations using the following resources: The Timeline Find information on the files of the four government agencies and view examples of their work. The Map Investigate selected UFO sightings in Canada, some of which, according to the Department of National Defence, have not been solved. The Search Investigate the files of all four agencies through the search tool.