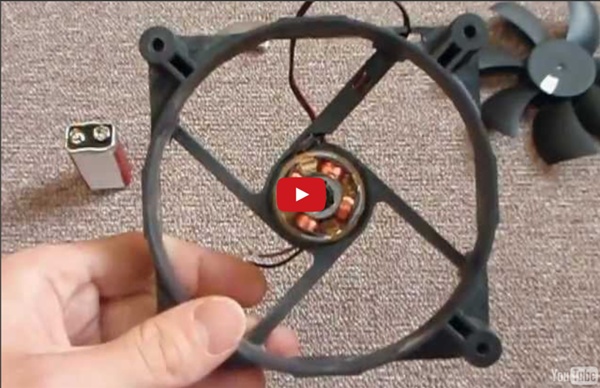 Schools of Fish Inspire New Wind Farms that Will Increase Energy 10X Every now and then you come across an article and concept that makes you really smile and feel good on the inside. Typically they are "feel-good" stories that you see online or on the news, but today I came across this story about how scientists have designed new wind farms based on how schools of fish swim. So not only are we creating technology to help the environment but we are looking at nature for help. The new vertical-axis wind turbines are designed by Caltech and are currently being tested in the California desert. Based on early tests, the new design actually helps increase energy output by 10X and could be the wave of the future for wind technology. Here is a little statement from a Caltech engineer: Additionally here is a statement from the author of the study: Read more about the new advance over on the BBC

Magnets 4 Energy - Build Your Own Magnetic Generator and Never Pay For Electricity Ever Again! Wind Turbine Output Boosted 30% by Breakthrough Design Clean Power Published on April 29th, 2009 | by Timothy B. Hurst Passive structure design of “Wind Energizer” by Leviathan Energy reportedly increases wind turbine efficiency 30% in field tests. Technological advancements in wind energy efficiency have generally come incrementally and usually made via a process of increasingly large wind turbine blades. But that pattern of incremental improvements may be a thing of the past if Leviathan Energy has anything to say about it. The principle theory at work is that by placing passive objects around a wind farm it will change the circulation around a large wind turbine. “This is a disruptive technology,” Leviathan Energy CEO Dr. Farb is a bit of a modern day renaissance man. The Wind Energizer is a donut-shaped structure made from steel and plastic, but the exact dimensions of it depend on site-specific data, like the tower height, length of the blades, prevailing wind direction and intensity, etc. Images courtesy of Leviathan Energy Timothy B.

Schematic of How to Build a Magnetic Motor There also is this so-called “free energy”, the zero-point energy, proven mathematically by many scientists. My duty as a green optimistic is to collect everything I see someone has struggled explaining and demonstrating, put it in one place and let the people see and comment. Such is the example of this magnetic motor. But there are also “green pessimistic” websites. I took such an article today as an inspiration because it talks about a magnetic motor, one of my favorite subjects, about which I haven’t heard much lately. Here is the whole process of transforming the magnetic energy into mechanical energy, explained by the invention’s author (Sandeep Acharya): “Think of Two Powerful Magnets. Now there is another magnet at 30 angular distance on Rotating Disk on both side of the magnet M1. The space between two disk is just more than the width of magnets M0 and M1 and space needed for connecting gear G0 to rotating disk with a rod. What do you think?

BuildItSolar: Solar energy projects for Do It Yourselfers to save money and reduce pollution Magnetic Generator - Does it Really Work? Magnetic Generators - A Real Alternative to Solar Power If you’re interested in alternative energy and saving money, you've no doubt thought about looking into solar power. While solar power is still the first choice for many people, magnetic energy is becoming increasingly popular. Despite it's many advantages over solar power, magnetic energy will always be less popular for the simple reason that magnetic generators can't be bought, they have to be built. Using the power of magnetism to produce free energy is nothing new. In fact it's been possible since Tesla discovered it. The Tesla Magnetic Generator Review This review is going to look at the Tesla Magnetic Generator. This resulted in them deciding to release their plans as a down-loadable package that anyone could buy via the Internet and then build their very own magnetic generator. What Do You Get For Your Money? They even contacted me about a week later to see how my generator was progressing. Print Your Plans! Does it Work?

Torresol Energy - Gemasolar thermosolar plant Gemasolar is the first commercial-scale plant in the world to apply central tower receiver and molten salt heat storage technology. The relevance of this plant lies in its technological uniqueness, since it opens up the way for new thermosolar electrical generation technology. Characteristics of Gemasolar: Rated electrical power: 19.9 MWNet electrical production expected: 110 GWh/year Solar field: 2,650 heliostats on 185 hectaresHeat storage system: the molten salt storage tank permits independent electrical generation for up to 15 hours without any solar feed. The prolongation of the plant's operating time in the absence of solar radiation and the improvement in efficiency of the use of the heat from the sun makes Gemasolar's output much higher than that which is delivered by other technologies in a facility with the same power. The notable increase in the plant's power efficiency guarantees electrical production for 6,500 hours a year, 1.5 to 3 times more than other renewable energies.