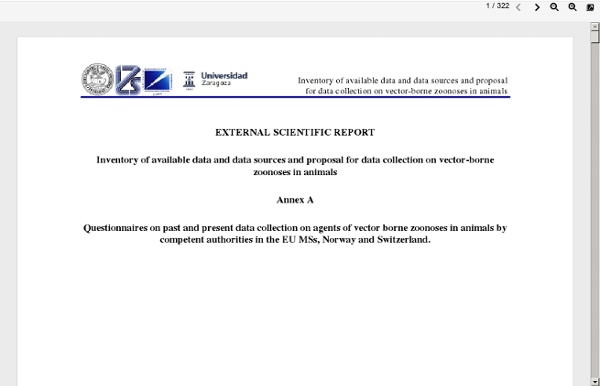 Lyme disease Lyme disease (Lyme borreliosis) is an infectious disease caused by at least three species of bacteria belonging to the genus Borrelia.[1][2][3] Borrelia burgdorferi sensu stricto[4] is the main cause of Lyme disease in North America, whereas Borrelia afzelii and Borrelia garinii cause most European cases. The disease is named after the towns of Lyme and Old Lyme, Connecticut, US, where a number of cases were identified in 1975. Although it was known that Lyme disease was a tick-borne disease as far back as 1978, the cause of the disease remained a mystery until 1981, when B. burgdorferi was identified by Willy Burgdorfer. Signs and symptoms[edit] This "classic" bull's-eye appearance is also called erythema migrans.

INTECH - MARS 2012 - Au sommaire: Leptospirosis: Epidemiologic Factors, Pathophysiological and Immunopathogenic Edited by Alfonso J. Rodriguez-Morales, ISBN 978-953-51-0274-8, 576 pages, Publisher: InTech, Chapters published March 16, 2012 under CC BY 3.0 licenseDOI: 10.5772/1335 Edited Volume Tropical Medicine has emerged and remained as an important discipline for the study of diseases endemic in the tropic, particularly those of infectious etiology. Emergence and reemergence of many tropical pathologies have recently aroused the interest of many fields of the study of tropical medicine, even including new infectious agents. Then evidence-based information in the field and regular updates are necessary. Current Topics in Tropical Medicine presents an updated information on multiple diseases and conditions of interest in the field.

PLOS 20/06/12 Environmental Change and Disease Dynamics: Effects of Intensive Forest Management on Puumala Hantavirus Infection Intensive management of Fennoscandian forests has led to a mosaic of woodlands in different stages of maturity. The main rodent host of the zoonotic Puumala hantavirus (PUUV) is the bank vole (Myodes glareolus), a species that can be found in all woodlands and especially mature forests. We investigated the influence of forest age structure on PUUV infection dynamics in bank voles. Over four years, we trapped small mammals twice a year in a forest network of different succession stages in Northern Finland. Our study sites represented four forest age classes from young (4 to 30 years) to mature (over 100 years) forests. We show that PUUV-infected bank voles occurred commonly in all forest age classes, but peaked in mature forests.

INTECH - AVRIL 2012 - Zoonosis. Au sommaire: Insights into Leptospirosis, a Neglected Disease Edited by Jacob Lorenzo-Morales, ISBN 978-953-51-0479-7, 448 pages, Publisher: InTech, Chapters published April 04, 2012 under CC BY 3.0 licenseDOI: 10.5772/2125 Edited Volume Zoonotic diseases are mainly caused by bacterial, viral or parasitic agents although "unconventional agents" such as prions could also be involved in causing zoonotic diseases. Many of the zoonotic diseases are a public health concern but also affect the production of food of animal origin thus they could cause problems in international trade of animal-origin goods.

FRONTIERS IN SYSTEMS BIOLOGY - 2012 - In search for factors that drive hantavirus epidemics Introduction Hantaviruses (Bunyaviridae) are carried by rodents, insectivores, and – as recently confirmed – by bats (Kim et al., 1994; Weiss et al., 2012) and transmitted to humans by inhalation of infected excreta (Heyman et al., 2009c). So far, only some rodent-borne hantaviruses have been found to be pathogenic to humans. The relationship between the rodent population density, the hantavirus prevalence in the rodent population, and the number of human hantavirus cases, including the hemorrhagic fever with renal syndrome (HFRS) cases in Eurasia, has been suggested worldwide (Tersago et al., 2011a).

PLOS 04/02/15 Health Care Costs, Utilization and Patterns of Care following Lyme Disease Abstract Background Lyme disease is the most frequently reported vector borne infection in the United States. The Centers for Disease Control have estimated that approximately 10% to 20% of individuals may experience Post-Treatment Lyme Disease Syndrome – a set of symptoms including fatigue, musculoskeletal pain, and neurocognitive complaints that persist after initial antibiotic treatment of Lyme disease.

Advances in Virology Volume 2012, Hantavirus Regulation of Type I Interferon Responses About this page Our systems have detected unusual traffic from your computer network. This page checks to see if it's really you sending the requests, and not a robot. Why did this happen? This page appears when Google automatically detects requests coming from your computer network which appear to be in violation of the Terms of Service.

PLOS 17/02/15 The Lyme Disease Pathogen Has No Effect on the Survival of Its Rodent Reservoir Host Abstract Zoonotic pathogens that cause devastating morbidity and mortality in humans may be relatively harmless in their natural reservoir hosts. The tick-borne bacterium Borrelia burgdorferi causes Lyme disease in humans but few studies have investigated whether this pathogen reduces the fitness of its reservoir hosts under natural conditions. We analyzed four years of capture-mark-recapture (CMR) data on a population of white-footed mice, Peromyscus leucopus, to test whether B. burgdorferi and its tick vector affect the survival of this important reservoir host. We used a multi-state CMR approach to model mouse survival and mouse infection rates as a function of a variety of ecologically relevant explanatory factors. We found no effect of B. burgdorferi infection or tick burden on the survival of P. leucopus.

K STATE 07/06/10 K-State Professor Uses Remote Sensing to Track Spread of Hantavirus Source: Doug Goodin, 785-532-3411, dgoodin@k-state.edu. News release prepared by: Greg Tammen, 785-532-2535, media@k-state.edu Monday, June 7, 2010 MANHATTAN -- If a picture is worth a thousands words, several pictures may hold the key to combating a deadly disease, one Kansas State University researcher believes. ENTOMOLOGY TODAY 30/03/15 Mice Aren’t Nice, They Help Transmit Lyme Disease By Hannah Foster Upon hearing the words “Lyme disease,” most people think of two things: ticks and deer. Although these are certainly important aspects of the disease, ticks and deer are only two pieces of the puzzle.

Braz. J. Microbiol. vol.44 no.1 São Paulo 2013 Characterization of a virulent Leptospira interrogans strain isolated from an aba Characterization of a virulent Leptospira interrogans strain isolated from an abandoned swimming pool Karine M. ForsterI; Daiane D. SCIENCE DIRECT SEPT 2002 Rapid and sensitive handheld biosensor for detection of hantavirus antibodies in wild mouse blood sampl Abstract Hantavirus cardiopulmonary syndrome (HCPS) is an acute, life threatening viral illness that was first recognized in the spring of 1993 during an outbreak in the Four Corners region of the southwest United States. The etiologic agent, Sin Nombre (SN) virus, is a zoonotic infection that is enzootic in deer mice (Peromyscus maniculatus). Both human and rodent infections lead to specific antibody responses, and detection of such antibodies is the mainstay of diagnosis of infection in both species. More than 300 cases of HCPS have been confirmed in 30 states and four Canadian provinces since 1993 outbreak. Forty percent have been fatal.