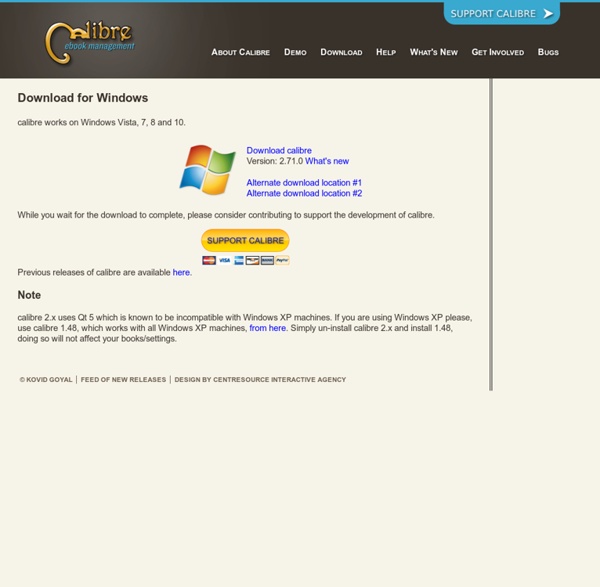 Ebook Gratis: Libri, Riviste e Fumetti Gratuiti The Best Backup Software OB Roundup Hard drives fail. Files become corrupted. Viruses hit. Laptops get dropped or stolen. Local file-and-folder backup programs create copies on local drives or media, disk imaging software creates a snapshot of your entire drive, and online backup services automate uploading your data to secure off-site storage. The file-and-folder backup apps collected here protect only the files and folders that you specify, and typically give you the option of preserving one or more older versions every time it backs up the latest set of updated files. A drive-imaging program, by contrast, makes a complete backup of your entire hard drive or of one or more partitions. How Backup Apps WorkThe best file-and-folder backup programs work quietly in the background, making copies of your files either on a regular schedule or whenever a new version of a file is saved to disk. All file-and-folder backup programs let you select any folder or a set of folders as a backup source. Genie Backup Manager

Homepage Free Open-Source Disk Encryption - Documentation This documentation is not guaranteed to be error-free and is provided "as is" without warranty of any kind. For more information, see Disclaimers. TrueCrypt is software for establishing and maintaining an on-the-fly-encrypted volume (data storage device). On-the-fly encryption means that data is automatically encrypted right before it is saved and decrypted right after it is loaded, without any user intervention. Files can be copied to and from a mounted TrueCrypt volume just like they are copied to/from any normal disk (for example, by simple drag-and-drop operations). Let's suppose that there is an .avi video file stored on a TrueCrypt volume (therefore, the video file is entirely encrypted). Note that TrueCrypt never saves any decrypted data to a disk – it only stores them temporarily in RAM (memory). For a quick start guide, please see the chapter Beginner's Tutorial.

When Windows Update Fails, This Is How You Fix It The recent Windows 8.1 August Update blindsided many users with issues. Some experienced BSODs or black screens, while others found themselves stuck in an infinite reboot loop. If you’ve been negatively affected by a Windows Update, here’s a quick list of troubleshooting steps that will help you restore Windows to a functional state. Windows Crashes With A Blue Screen Of Death A BSOD typically hints to a hardware problem or faulty drivers, but can also be caused by third-party software. The August Update BSOD After applying the Windows August Update, many Windows 7 and 8 users experienced BSOD crashes with a 0x50 Stop error message. According to Microsoft, August Update BSOD crashes are caused by the following updates, which subsequently have been disabled: How To Fix It A workaround proposed by Microsoft Community member rvuerinckx recommends to boot from a recovery disk and remove the following file: C:\Windows\System32\FNTCACHE.DAT Type the following command: dism /image:C:\ /get-packages

Winslew You might know this – you just found a nice webpage you want to read but have no time right at this moment? Maybe you create a bookmark for it – then you forget about it and remember it while on a long flight or being not connected to the internet. Wouldn’t it be cool to have such webpages marked for reading it later and having cached version of all this webpages on your notebook? Pocket (formerly known as Read It Later) is a service which provides a centralized storage for your webpages you want to read later. There are bookmarklets available for all browser, there are multiple clients available on iPhone and on Mac OS X and you can see all you items on a webpage online. Winslew now is a Windows client to this service which can be used to fully administer your items (add, remove, mark as read, tagging, …) which caches text only version of the webpage so you can read them whenever you want and whereever you are.

34 Online Backup Services Reviewed (January 2016) 9. Livedrive Review Livedrive is an online backup service that offers an interesting mix of backup plans, a cost effective way to add computers, and a really nice computer and mobile app interface. Livedrive "Backup" and "Pro Suite" are the two backup plans you can purchase. They both offer unlimited online backup, but the "Backup" plan only supports backing up 1 computer, whereas the "Pro Suite" can backup up to 5 computers. Livedrive "Backup" runs $8.00 /month, and "Pro Suite" is $25 /month. All Livedrive online backup plans offer significant discounts if you prepay for one year. Another plan offered by Livedrive is called "Briefcase," and is just an online storage plan that offers 2 TB of space - it doesn't back up your files like a regular backup plan. If you purchase the "Pro Suite" plan, you get 5 TB of the "Briefcase" plan included, plus its added features.