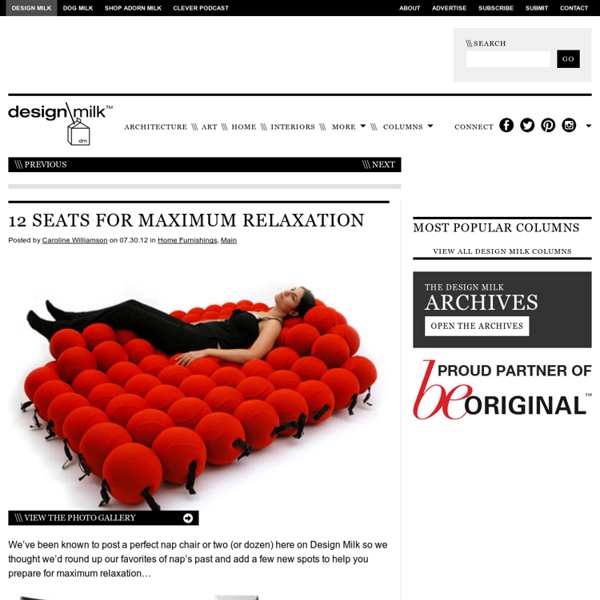 We’ve been known to post a perfect nap chair or two (or dozen) here on Design Milk so we thought we’d round up our favorites of nap’s past and add a few new spots to help you prepare for maximum relaxation… Let’s start with POWER’NAP. I mean, they had me at the name. Designed by Ninna Helena Olsen, this origami-like design “gently encloses your body” while looking like a work of art. Yes, please! I’m sure this sculptural chair would fit into any office. The Cradle just screams cozy, doesn’t it? The Loopita might look like a giant Hot Wheels track but I think it looks like a sleek lounge spot for two. I just want to dive into this like it was a big leaf pile, don’t you? One of our personal faves has always been the Couch Sleeper by Anne Lorenz. It looks like relaxing on a bed of squishy volleyballs, but the Feel Seating System Deluxe is made up of 120 “soft and extremely pleasant” balls. Oradaria Design came up with the Blandito®, a transformable pad for lazy living.

Blooming Zoetrope Sculptures The placement of the appendages on these sculptures is critical to the success of the animation effect. The positions are based on a specific phyllotaxy (i.e. leaf order) used by nature in a number of botanical forms, including pinecones, pineapples, sunflowers, artichokes, palm trees, and many succulents. The photo above shows just such a succulent. I have numbered the leaves from youngest to oldest. If you follow the numbers in sequence you will find that each leaf is approximately 137.5º around the core from the previous leaf. 137.5º is a very special angle, called the golden angle, based on the golden ratio. Wood Plank Wall DIY We recently completed a project in our bedroom (a diy wood plank wall) that has me dragging every stranger and friend into our house to show it off! The inspiration came from the walls that are inside the OC Mart Mix. We know our limits…so we knew we’d need some help on this project.

Spin Dryer Loading... Please wait... Loading zoom Spin Dryer Brand: Laundry Alternative Unusual And Creative Beds Here is a list of creative and unique bed designs by various designers … Vertical Bed ( Designer: Ernesto Neto ) Book Bed : (Designer: Yusuke Suzuki) Feel The Deluxe Embrace Lounge : (Designer: Tanya Aguiniga) Indoor Drive-In Theater August Moon by Michael Counts Fun fact: On June 6, 1933, the first drive-in movie theater opened in Camden, New Jersey. You might think we've come a long way since then. Designer Michael Counts , however, thinks otherwise. He's the man behind August Moon Drive-In, which when completed next year in Nashville, Texas, will stand as a large-scale replica of the ‘60s-era drive-in theater featuring the largest non-IMAX movie screen in North America. This new moviegoing experience will be housed underneath a 40,000-square-foot, air-supported dome with a simulated skyline. Filled with real trees, a half acre of grass, gravel pathways and a soundscape delivering the chirps of crickets and the whisper of a summer breeze, the August Moon will offer up to 350 guests seating in 40 modified classic cars, private booths and hammocks.

Finally, Ikea Furniture You Can Build In 5 Minutes Ikea furniture seems like such a good deal, until you get it home and realize that you have to spend half a day or more building it. Ikea’s new Regissör line is an attempt to address this pain point. The company promises that its new bookshelf, cabinets, and coffee table can be constructed in a mere five minutes. How is this possible? To make the builds quicker, Ikea has deviated from the norm in a few ways: Most boards in the Regissör line are now wedge-shaped on their ends, to lean into one another at 45-degree angles, rather than connect at more precarious 90-degree angle. From what we can tell, this creates a more self-supportive structure that can get by with Ikea’s new pre-installed wooden dowels at each joint, rather than the screw-and-lock components Ikea uses today.

Space-Saving Suspended Bed in a Modern London Apartment Good urban architectural design takes space and aesthetic into account, allowing them to work in unison, much like this efficient London apartment in Camden. While some compact residences use a modular design to create the visual effect of more space, this particular English home opts to design vertically by featuring a suspended bed overhead. This innovative apartment allows inhabitants to have more walking room on the ground floor without disrupting the tastefully modern design.

9 Underarm & Deodorant Stain Removal Tips Looking for ways to clean up those nasty yellow armpit stains that sweating can leave behind on shirts? Or are you trying to combat crusty residue from deodorant? Here are several different remedies you can try, each using basic items you likely have in your home already. Sponge fabric with ammonia then rinse. Heat-sensitive furniture lets you leave your trace on it Designer Jay Watson has put the heat on one of his recent furniture creations, a table-and-seat ensemble that comes with a thermochromic finish. This means that anything or anyone who emits some sort of heat will leave behind some sort of thermal impression on the surface. If we had one of these we’d probably cut down on cold beer but still try to get our friends drunk so we can press their faces to the table.

The Moorings Yacht Charter Since you need to start thinking about summer vacations now (seriously), a suggestion: Forget the road trip. This year, look to the yacht trip. Your concierge on the high seas: The Moorings, a yacht charter company that provides five-star overwater amenities — at a fraction of the cost of your typical five-star vacation. Image by Sean McGee Started in 1969, The Moorings now has luxe yachts for hire available in more than 20 ports around the world.