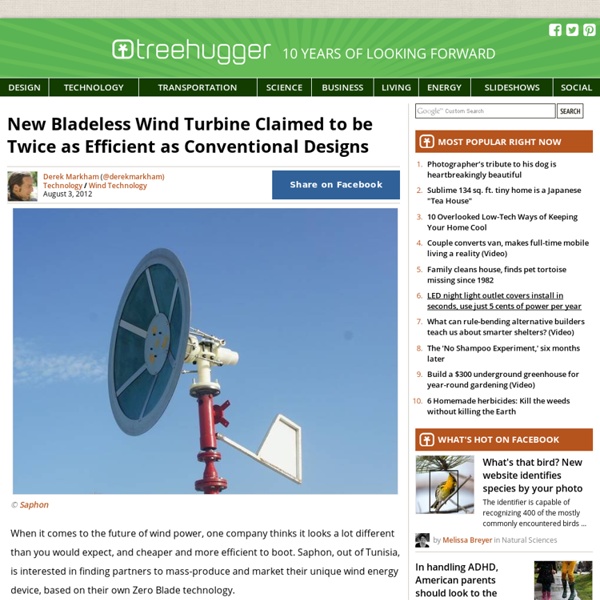 © Saphon When it comes to the future of wind power, one company thinks it looks a lot different than you would expect, and cheaper and more efficient to boot. Saphon, out of Tunisia, is interested in finding partners to mass-produce and market their unique wind energy device, based on their own Zero Blade technology. "The Zero-Blade Technology is largely inspired from the sailboat and is likely to increase the efficiency of the current wind power conversion devices. The blades are replaced by a sail shaped body while both hub and gearbox are removed." SLIDESHOW Wind Energy Today: A Look at Wind Energy Projects Around The World According to the company, their zero-blade technology devices are capable of overcoming the Betz' limit, which states that no turbine can capture more than 59.3 percent of the kinetic energy of the wind. PHOTO: Impressive Beast! The Saphon Zero Blade technology is different in other ways as well, most significantly being storage of energy. Related:  Better

Plan Bee: Feds Propose Plan to Reverse Honeybee, Butterfly Decline The federal government hopes to reverse America's declining honeybee and monarch butterfly populations by making more federal land bee-friendly, spending more money on research and considering the use of less pesticides. Scientists say bees — crucial to pollinate many crops — have been hurt by a combination of declining nutrition, mites, disease, and pesticides. The federal plan is an "all hands on deck" strategy that calls on everyone from federal bureaucrats to citizens to do what they can to save bees, which provide more than $15 billion in value to the U.S. economy, according to White House science adviser John Holdren. "Pollinators are struggling," Holdren said in a blog post, citing a new federal survey that found beekeepers lost more than 40 percent of their colonies last year, although they later recovered by dividing surviving hives. The plan calls for restoring 7 million acres of bee habitat in the next five years. --- The Associated Press

New Protein Supercharges Immune System to Fight Cancer by Orion Jones Scientists have discovered a new protein that appears to supercharge the body's own immune system, allowing it to compete against cancerous cells in ways that were previously impossible. Called LEM, or lymphocyte expansion molecule, the newly discovered protein molecule allows the immune system to continuously produce high quantities of T cells, which are the body's natural defense against cancer. "This is a completely unknown protein. When cancer first attacks the body, the immune system responds by sending T cells to the site of the mutated, cancerous cells. Researchers hope their discovery will result in a gene therapy that allows the T cells of cancer patients to be enhanced by the LEM protein, then injected back into their body. Cancer is fundamentally a disease of the genome, explains Eric Green, director of the National Human Genome Research Institute, in his Big Think interview. Read more at The Telegraph. Photo credit: Shutterstock

Is Cohousing the Future? (Infographic) Is cohousing, the collaborative, intentional community of individual, private homes, the future of urban design? Compared to the isolated way some people live, and considering that over 50 percent of those in the United Kingdom don’t know their neighbors, this could seem like an extreme lifestyle change. However, those who are looking to pool their resources for convenience, community or consciousness see cohousing as one option for pursuing those goals. Infographic via Towergate. The Giant Rats That Save Lives This video is not currently supported on your browser. Advertisement Continue reading the main story Video MALANJE, Angola — I’M walking in a minefield here in rural Angola, tailing a monster rat. This is a Gambian pouched rat, a breed almost 3 feet from nose to tail, the kind of rat that gives cats nightmares. These rodent mine detectors have been dubbed HeroRats, and when you’re in a minefield with one that seems about right. I’m here because five years ago, my kids gave me a HeroRat for a Father’s Day present through GlobalGiving.org. There are 39 HeroRats here, and they underscore the way the aid world is increasingly embracing innovative approaches to old challenges. Photo I’ve seen land-mine detection in Afghanistan and elsewhere, and it’s dreadfully slow and inefficient. Usually it’s an empty AK-47 cartridge or a nail. In contrast, the rats scamper along on leashes. “Rats are also more reliable,” said Alfredo Adamo, a field supervisor here. Continue reading the main story

An Alternative to the Modern Day Torture Device Called 'Your Desk' by Natalie Shoemaker Even equipped with the knowledge that sitting for long periods of time is awful for our bodies, not much has changed about the office. We still sit at desks, bent over our keyboards. Altwork wants to give people another way to work. It's no treadmill desk; rather it's a product that tries to make the office a little more comfortable. “We aren’t trying for a general-purpose desk. The workstation looks like a modified examination chair from the dentist's office. After all, technology has allowed us to progress and work better, but the space where we work for eight hours of the day hasn't changed one bit: But the bigger question that needs answering is where does Altwork fit into an office building? The truth is it probably doesn't. Altwork's alternative desk makes the standard sit-down desk look like a modern-day torture device, but the truth is this setup probably won't be seen in most office spaces. Natalie has been writing professionally for about 6 years.

Real-Life Star Trek Tractor Beams Will Change How We Practice Medicine by Natalie Shoemaker Imagine going into the doctor and having a blood clot or cell inside your body moved or manipulated without any incisions. The future may be closer than you think. The non-invasive procedures of the Star Trek universe — a quick scan and a hypo-spray — is an optimistic wish for the future of medicine. It's possible the surgical practices of today will be looked at by future generations as medieval. “Acoustic structures shaped as tweezers, twisters, or bottles emerge as the optimum mechanisms for tractor beams or containerless transportation,” the researchers wrote in their paper, which was published in Nature. The researchers were able to accomplish this feat by building a grid comprising 64 loud speakers. In the video below, the researchers demonstrate how objects can be moved around by an invisible hand that holds the object between two fields, like the object is being pinched and moved. Natalie has been writing professionally for about 6 years.

He had an epiphany while living in a dumpster. And it could help change the future of housing. He was living in a dumpster when the idea first came to him. His name's Jeff Wilson — Dr. Jeff Wilson, actually. He's a professor at Huston-Tillotson University in Austin, Texas, known fondly on campus as "Professor Dumpster." Photo by Jeff Wilson/Wikimedia Commons. Wilson made himself the guinea pig in a year-long experiment on sustainable living. He traded a 3,000-square-foot home and most of his worldly possessions for a spartan 33-square-foot living space created in a big green dumpster. Wilson's experiment eventually became a nonprofit called The Dumpster Project that "invites learners of all ages to rethink sustainability through the quirky task of turning a dumpster into a home." In an interview with the Washington Post, Wilson said the experience made him happier than he's ever been. Living in a dumpster may not be for everyone, but Wilson thinks smart home engineering can yield the same benefits. Case in point: tiny houses. Photo by Benjamin Chun/Flickr. Photo by ROLU/Flickr.

Organic honey is a sweet success for Cuba as other bee populations suffer Long known for its cigars and rum, Cuba has added organic honey to its list of key agricultural exports, creating a buzz among farmers as pesticide use has been linked to declining bee populations elsewhere. Organic honey has become Cuba’s fourth most valuable agricultural export behind fish products, tobacco and drinks, but ahead of the Caribbean island’s more famous sugar and coffee, said Theodor Friedrich, the UN Food and Agriculture Organisation’s (FAO) representative for Cuba. “All of [Cuba’s] honey can be certified as organic,” Friedrich told the Thomson Reuters Foundation. After the collapse in 1991 of the Soviet Union, Cuba’s main trading partner, the island was unable to afford pesticides due to a lack of foreign currency, coupled with the US trade embargo. Now that the United States is easing its embargo following the restoration of diplomatic ties last year, Cuba’s organic honey exporters could see significant growth if the government supports the industry, bee keepers said.

Man After Losing 70 Lbs While Taking Care Of Sick Mom click 2x It’s that time of year when we’re all starting to think about those summer body goals. Yet when we go after them, it sometimes feels impossible. Proving what persistence and hard work can achieve, 26-year-old Jeffrey Kendall has decided to share his weight-loss transformation to motivate others and celebrate his results. The former are so impressive and visible, people even gave him a nickname that many would envy. Show Full Text The journey began when Jeffrey was living with his mother in her home in Connecticut, taking care of her after she’d suffered a brain aneurysm on July 4, 2015. Jeffrey has had self-image problems for a long time. “My good friend was also in an emotional time after a breakup and wanted help to get in shape. But it didn’t stop. After he posted his progress pic on reddit, people immediately called him a real-life Disney prince. However, Jeffrey believes that his mom and her attitude towards life may have been the biggest factor that pushed him towards improving.

The Awkward but Essential Art of Office Chitchat Every day around the world, an estimated three billion people go to work and 2.9 billion of them avoid making small talk with their co-workers once they get there. Their avoidance strategies vary. Some will keep their headphones in and their eyes low. Others will pantomime receiving an urgent message that requires an immediate, brow-furrowing, life-or-death rapid response, which incapacitates them from doing pretty much anything else, not excluding riding in, or communally waiting for, an elevator in their office building; making conversation while heating up lunch lasagna in the office microwave; walking from the entrance of their office building to the nearest public transit stop, or to literally anywhere, unless wait, you’re also going there? Because I actually meant to pop in this fine Persian rug wholesaler. [Read our full package, “The Office: An In-Depth Analysis of Workplace User Behavior.”] Building rapport applies when you’re interviewing, too. But, how? But, how?