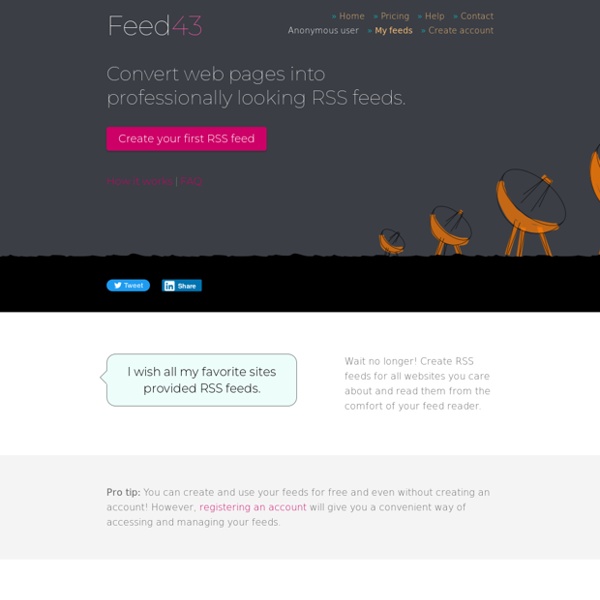 Create RSS feed from any web page using Yahoo Pipes - Reaper-X In this post, i’m going to write a simple explanation / basic example about using Yahoo Pipes to fetch a webpage (you are free to use any pages you want assuming they allow Yahoo Pipes) and then create a RSS Feed from it so you can read it on your favorite rss reader As an example, in this post i’m going to give an example of creating RSS Feed from HorribleSubs website (horriblesubs.org) that i’ve been using (for myself only) so i can keep track on their Gintama release easily (i read that they’re planning on doing a total makeover of their site so i guess it’s okay to use them as an example) Before anything else, please see the source of the pipe used in this example (you need to log in to Yahoo first) because you’ll need to be logged in to Yahoo to see or create a new pipe Update 1: Here’s the updated version of the pipe which is used for their new domain (horriblesubs.info) and their new site design. 1. and here is what it looks like on the Yahoo Pipes side 2. 3. and here’s the output

Microformats: What They Are and How To Use Them Advertisement Web 2.0 has its positive and its negative sides. Apart from tremendous technological improvements, provided by Ajax, semantically organized content and the growing popularity of RSS-Feeds, the term “Web 2.0″ still hadn’t managed to assert itself as the renewed Web rather than a new revolutionary technology as it is mistakenly being called. Consequence: many renewed techniques, which somehow seem to be related to the “new” Web, aren’t fully or properly understood. This results in public misunderstandings and keeps both developers and users away from the use (the improvement) of these techniques. One of the new terms on the horizon is Microformats (sometimes abbreviated µF or uF) – formats, which make it possible to create meta-content which can be not only read, but also understood by machines (which was the basic idea of Semantic Web1, which is not Web 2.0). Things you should know about Microformats Existing Microformats Advantages of Microformats Articles About Microformats

RSS from the New Delicious The new delicious is finally up. Not all that much different but I am excited because I use it every day. One of the features I use every day is the RSS. When I heard delicious had enabled RSS feeds today, I went to the site right-away to set them up. Unfortunately, I couldn’t find them anywhere. After going through my archives I have been able to reconstruct them.Here’s the format they are currently using (updated 7/29/2015): Changed it once again: Notice: now it’s on HTTPS in addition to the subdomain change. username – your delicious username, without the brackets /tag – This is optional but if you want to limit the RSS feed to a particular tag you will need to insert a / and then the tag. For example, if you wanted to keep track of all the bookmarks I’ve tagged “sem” you would use:

Kristi Hines on RSS for Facebook Pages Do you want to keep up with the latest news for your favorite Facebook fan pages, but don’t want to miss out on them because EdgeRank is hiding them from your new feed? Or would you prefer to not have to go to Facebook at all until your favorite pages have updates? One of the Google Chrome extensions I use, RSS Subscription Extension, puts an RSS icon in the browser’s address bar when there is an RSS feed discovered on a page. On Facebook pages that haven’t been converted to the new Timeline design, that icon comes up so you can subscribe to your favorite page’s RSS feed. For pages with the new design enabled, however, the RSS feed has gone missing. Fortunately, the feed is still available though. For example, my Facebook page URL is Highlighted in the above is my page’s ID number, 255576081168962. Take this URL and paste it into your preferred RSS reader.

Wallflux RSS for Facebook Pages & Groups The Sociable - For Pinterest Yes this article is about Pinterest but no, we’re not going to talk about the site’s astonishing rise or its revolutionary design features. Instead we’re going to talk about something old school, RSS. As you might know we love RSS but over the past year fewer and fewer sites are including RSS as a service for their users. In 2011 Twitter removed its RSS options from the site, although, as we’ve shown, it is still possible to generate RSS feeds for user profiles, Twitter lists, and searches. And last year Google+ launched without any native RSS support. So what of Pinterest’s RSS support? Pinterest Fire Hose RSS The site does provide an RSS option for user profiles; this feed combines all the latest pins a user has created regardless of which board they are in. Pinterest Board RSS Following a specific board created by a user via RSS is less obvious. To do this, first open the board (e.g.

Looking for Your Twitter RSS Feed after the API Change? Here's How to Make a New One Looking for Your Twitter RSS Feed after the API Change? Here’s How to Make a New One Twitter Feeds Aren’t Gone, They’re Just in Hiding Twitter no longer provides RSS feeds for users so any URL that you generated with the old version of the Pixsy Twitter RSS feed generator will no longer work (I verified that they are officially gone after the phaseout period that they implemented earlier this year). The first option is a free, open source application that I developed (Tweetledee). Here are the details for both approaches. Tweetledee – Easy Access to Twitter RSS Feeds Tweetledee is an open source, MIT licensed application that is available on GitHub. Requirements Access to a web server with PHP version 5.3 or greater (PHP 5.4+ if you intend to use the pretty printed JSON files)libcurl installed on your web server (cURL) What You Get It currently provides access to the following RSS feeds: Update 8/6/2013: Learn how to pipe your Twitter data from Tweetledee to other applications on Sweetmeat

RSS for Twitter Searches, Lists and Timelines The step-by-step guide explains how you can easily create Twitter RSS feeds for the new Twitter API with the help of Twitter widgets and a Google Script. Twitter does not offer RSS Feeds so here is a simple workaround that you can use to generate RSS feeds for your various Twitter streams including Twitter search results, user timelines, favorites, lists and even the new Twitter collections. RSS feeds are essential if you need to use your Twitter data elsewhere. For instance, you need RSS feeds to create recipes in IFTTT that get triggered when there’s a new @mention or a new tweet is added to search results. You can import your Twitter timeline automatically into your blog through RSS feeds. You can follow Twitter accounts in an RSS reader like Feedly or even Google Docs. There are two way to create RSS feeds for Twitter. The trick is simple. On the Twitter website, go to Settings -> Widgets (link) and create a new widget.

Directory Yahoo RSS Feeds In the beginning, it was just the Yahoo! Directory -- of course, it wasn't called "the directory" then: it was just Yahoo!. And when David and Jerry's pet dissertation-stalling project became more work than they could manage on their own, they assembled a team of unusual helpers. These "surfers" were a strange assortment -- ex-librarians, inquisitive generalists, obsessive-compulsives -- but they shared a few key traits: curiosity, an endless appetite for knowledge, and a passion for organizing information. Their goal (beyond satifying their own curiosity) was to help other users of the fledgling Internet find what they needed... even if they didn't know they needed it. The Spark wasn't there from the beginning, but once it launched, it seemed that it had been inevitable. Since February 2005, over 1,000 posts have been written by more than 50 surfers (only we're not called "surfers" anymore: we're now "editors").

Create RSS Feeds for Yahoo Yahoo provides content for a variety of products and services as RSS feeds — thousands of feeds in total. You can subscribe to an RSS feed in My Yahoo or another RSS feed reader application. If you are a developer, RSS is an XML application, so you can parse RSS feeds as XML and then use the content within those feeds to build your own web applications or mashups or desktop client applications. This page provides an overview of Yahoo RSS feed support and how to get started using RSS from a developer perspective. Getting Started with RSS RSS – "Really Simple Syndication" – is a mechanism for web site developers to publish headlines and frequently-updated content as a web feed. RSS files are XML. Most Yahoo RSS feeds have a single static URL, for example: A number of RSS feeds, however, take arguments or parameters, which enable you to generate different custom RSS feeds depending on the specific content you are interested in. Using Feeds

5 Interesting Ways To Use Google News RSS Feeds By learning more about these RSS feeds and incorporating a few interesting tricks to display and read these RSS news feeds, you’ll be able to stay on top of all the very best news as easily as possible. How’s that for useful? Creating RSS News Feeds Creating generic and specific news RSS feeds is quite an easy task. 1. You’ve probably already set up Google News to show local news in your preferred language. For me, I get: 2. Also at the bottom of the Google news page is a link to “About Feeds“, which shows you the various news topics and the RSS feeds to subscribe to them. For instance, Sci-Tech is: 3. At the top of Google News is the all-familiar search bar. For example, a basic news search for “Lemur”: 4. In the previous examples, you can see topic=t is tech, while q=lemur is your search term. For instance, limiting the search to the last month gives us: 1. 2. 3. 4. 5.