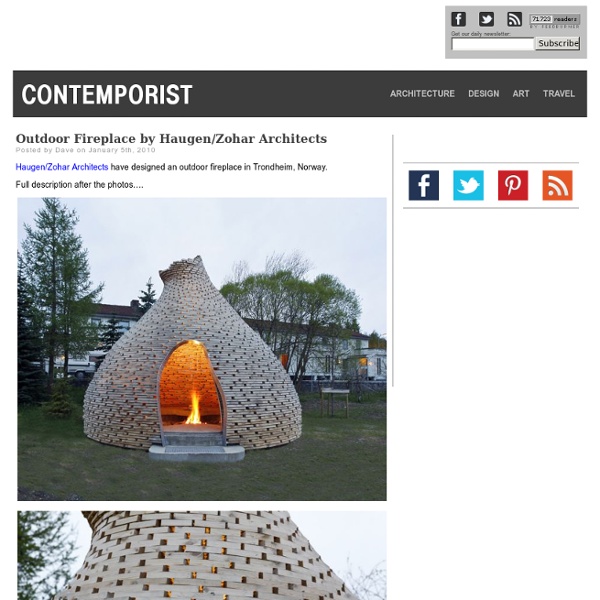 Haugen/Zohar Architects have designed an outdoor fireplace in Trondheim, Norway. Full description after the photos…. Photography by Grethe Fredriksen & Jason Havneraas Outdoor Fireplace by Haugen/Zohar Architects Together with the standard playground facilities we wished to combine an enclosed space for fire, storytelling and playing. Given a very limited budget, reusing leftover materials (from a nearby construction site) was a starting point that led the design to be based on short wooden pieces. Oak separators differentiate vertically between the pine pieces to assure airflow allowing easy drying of the pine pieces. A double curved sliding door was designed for locking the structure. Visit the website of Haugen/Zohar Architects – here.

kolonihagen summerhouse Standard Disclaimer: We know, second homes are evil. But they are such wonderful demonstrations of the talent of young architects, and they so often demonstrate how much can be done with small spaces. They just as easily could be first homes, and some of them are gems. As an example, Tommie Wilhelmsen's Kolonihagen Summerhouse is full of neat ideas. The big gesture is the sleeping loft hanging out over the entrance, creating a covered porch below and a lovely sleeping area above. The furniture is all built in; and the kitchen doesn't get any more minimalist than this. ::Tommie Wilhelmsen via ::Materialicious See also the summer house Tommie built in association with Todd Saunders in ::Treehugger here

Wherigo > Tools for creating GPS-enabled adventures TetraBox Light by Ed Chew Liquid to Light Designer Ed Chew takes a green step in the right direction with the TetraBox lamp, a light object made from discarded drink packets that would have otherwise ended up in landfills already packed to the brim. The design is achieved by unfolding the packets and refolding them into hexagonal and pentagonal sections that are then pieced together to form a geodesic sphere or any other desired shape. Here, the Epcot-like ball makes an attractive overhead light and casts an impressive web of shadows and shapes on the surrounding space. Designer: Ed Chew

Gothic Architecture Pictures All text and pictures © QT Luong. See conditions for use of pictures. There are 28 pictures on this page out of 228 pictures of Gothic Architecture. root bridges In Northeastern India, where it's nice and wet, bridges aren't built -- they're grown! The living bridges of Cherrapunji, India are made from the roots of the Ficus elastica tree. This tree produces a series of secondary roots from higher up its trunk and can comfortably perch atop huge boulders along the riverbanks, or even in the middle of the rivers themselves. In order to make a rubber tree’s roots grow in the right direction – say, over a river – the Khasis, a tribe in Meghalaya, use betel nut trunks, sliced down the middle and hollowed out, to create root-guidance systems. The thin, tender roots of the rubber tree, prevented from fanning out by the betel nut trunks, grow straight out.

Zero Carbon House, Shetland > Loader Less is the New More: Making the Most of Small Spaces Good Design For Living in Small ApartmentsAs people migrate to smaller spaces, good design helps a lot. This is something they figured out in Europe long ago, that if you don't have a lot of horizontal room you can go vertical. Tumidei in Italy makes some of the nicest stuff, like this unit with lots of storage under the bed. This unit just raises the floor high enough for beds to slide under. This one looks a bit clinical, but has two single beds plus a pull-out double bed in between. None of this stuff is cheap, nor, as far as I can tell is it available in North America, but there are ideas here that demonstrate how people can share a space and still get a little privacy, a good place to work and a lot of storage in a very small envelope. Like this?

Bates Masi Architects - Portfolio Profile Bates Masi + Architects LLC, a full-service architectural firm with roots in New York City and the East End of Long Island for over 50 years, responds to each project with extensive research in related architectural fields, material, craft and environment for unique solutions as varied as the individuals or groups for whom they are designed. The focus is neither the size nor the type of project but the opportunity to enrich lives and enhance the environment. The attention to all elements of design has been a constant in the firm’s philosophy. Paul Masi spent childhood summers in Montauk and currently resides in Amagansett. Harry Bates, a resident of East Hampton, received a Bachelor of Architecture from North Carolina State University.

small space At 500 square feet, it is not a huge retreat but it serves its purpose perfectly: fold-up sides keep it secure when not in use, while doubling as privacy screens, light blocks and thermal barriers as desired. Essentially a glass house on the inside, folding down three of the four exterior walls gives the occupant a nearly 360-degree connection to the surrounding context . These wall sections in turn become exterior decks when lowered, and are easily raised via “ a hydraulic system of wires, rope, pivoting sheaves and lead blocks, that serves as shutters.” The steeply-sloped roof simply drains water toward the back, and extends out on the other three sides to provide cantilevered cover and shade, with minimalist (lack of) detailing that fits with the rest of the structure. Inside, a 180-degree rotating fireplace likewise accommodates directional decisions about where one wants to face – into distant views or into the nearby wildlife-populated brush.