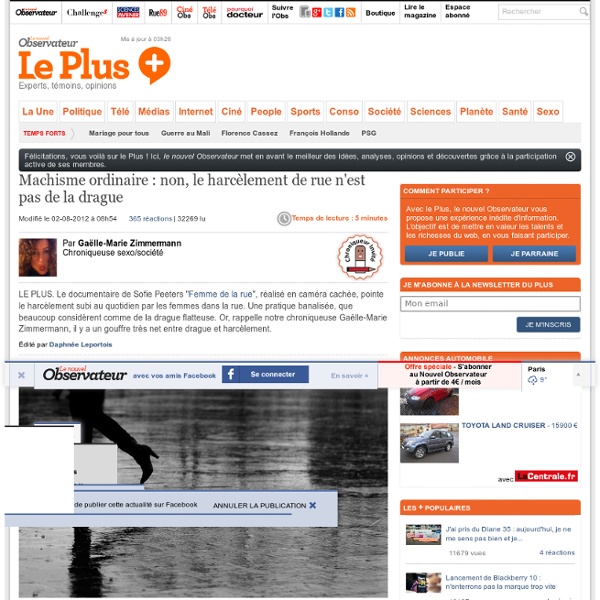 How to Kill a Troll - Incisive.nu Anita Sarkeesian is a cultural critic who makes YouTube videos. A lot of people like her work: she tried to raise $6,000 via Kickstarter to fund a new set of videos about women in video games, and raised nearly $160,000 instead. And it’s this fact—that people like Sarkeesian’s work, that they choose to listen to her and even put their money behind her projects—that so enrages some people who play video games. “Click to Hit Her” Since she started her Kickstarter, a lot of men have devoted themselves to telling the world how very much they disapprove of Sarkeesian, through hate mail, doxing, threats and images of rape, and most recently, an app that encourages you to beat Sarkeesian as a image of her face bruise and bleeds. Sarkeesian’s “before” image in the game. It’s nauseating. Why Did This Happen? Beyond that, I think most people find it difficult to hear criticisms of things they love. This essentialization of taste is pretty pervasive. How Do We Get Better? Non-Trolls Must Model Norms

Derailing for Dummies In attempting to communicate with you, the Marginalised Person™ may bring up examples of the sorts of daily manifestations of discrimination they face. Many of these examples seem trivial to Privileged People® but clearly reflect the way the Marginalised Person™ has been “othered” by society. “Othering” is a system of social markers that defines “Us” and “them”, neatly and conveniently categorising people into their appropriate places within society. The Marginalised Person™ you’re dealing with has been subjected to this “othering”. This means that their body is viewed as public property and the personal, intricate details of their lives and being are perceived as free information. You must nod patiently as the Marginalised Person™ tries to gain your understanding of the many complicated and subtle ways this othering impacts their lives until they come across a point that seems particularly grating for them.

Internet Social Justice Mob Goes Batshit on Activist, Has No Sense of Irony I've seen POC bloggers (many of whom get arbitrarily labeled "social justice bloggers" simply because they talk about the racism they experience on their personal blogs) get all kinds of harassment. People will make it a point to single these bloggers out. create entirely new blogs designed to send them racist messages when the blogger blocks them. They get harassed, threatened, stalked with no support or aid from the tumblr staff or other tumblr users not in their close circle of friends, year-round. There is a radical feminist blogger who has made numerous transphobic comments and when people who are trans* comment and call her out for making often eliminationist statements about trans people, she finds out their personal information and then e-mails it to their employers or family. There are bloggers bring attention to this behavior regularly to Tumblr staff and there is no concerted effort from Neil Gaiman and John Green to talk about how unfair it is.

Harassment via Wikipedia Vandalism As some of you may know a harassment campaign is being waged against me because of my Tropes vs Women in Video Games project on Kickstarter. This coordinated attack was launched by various online video game forums and has included attempts to get my accounts banned, a torrent of hate on YouTube, plus countless threats of violence, death, sexual assault and rape. As part of that intimidation effort the Wikipedia page about me was vandalized with misogynist language, pornography and racial slurs. I went back and forth about whether or not to share this publicly because I don’t want to inadvertently encourage this kind of behavior or scare other women into staying silent out of fear something similar may happen to them. About a year ago I noticed someone had made a Wikipedia page about me. The image below shows the result of the vandalism that took place over the course of June 5th and 6th, 2012. Click to see larger version – NOTE: I’ve blurred out the pornographic drawing Related posts:

Feminist Take on Games Draws Crude Ridicule, Massive Support | Underwire Anita Sarkeesian posted this photo on her Kickstarter page after her campaign to raise funds for videos critiquing misogyny in vidoegames hit 2,000 backers.Photo: Sarkeesian's Kickstarter page Pop culture critic Anita Sarkeesian launched a Kickstarter campaign a few days ago in hopes of raising $6,000 to make a series of feminist-critique videos about the roles women play in videogames. She ended up getting a bit more than she bargained for: She raised more than $120,000 while generating wrath among the online hordes, who have been harassing her in the crudest possible terms. In response to the call for funding for her Tropes vs. Women in Video Games project, the 28-year-old California woman has received an overwhelming number of negative comments on her YouTube channel (sample entries: “tits or back to the kitchen, bitch” and “fuck off prude” — more rude remarks are screengrabbed here). The Wikipedia entry about her has been defaced as well. Indeed. She has lesser-known supporters too.

Image Based Harassment and Visual Misogyny I’m making it a point to strategically share some of the online harassment I’ve received after launching my Tropes vs Women in Video Games Kickstarter. I’ve already posted about the harassment via YouTube and Wikipedia but these were not the only abusive cyber mob tactics employed to try and silence me. After struggling with whether or not to make the extent of the attacks public I’ve decided that it’s ultimately important to shed light on this type of abuse because online harassment and bullying are at epidemic levels across the internet. In addition to the aggressive actions against me that I’ve already shared, the harassers launched DDoS attacks on my site, attempted to hack into my email and other social media accounts and reported my Twitter and YouTube accounts as “terrorism”, “hate speech” or “spam”. They also attempted to “dox” and distribute my personal contact info including address and phone number on various websites and forums (including hate sites). Related posts: Like this:

This is what online harassment looks like An online game invites players to "beat up Anita Sarkeesian". When I first wrote about the sexist abuse of women online, collating the experiences of nearly a dozen writers, the response was largely positive. Many hadn't been aware there was a problem; they were shocked. But a few reactions stood out, among them that of Brendan O'Neill, the Telegraph blogs section's resident contrarian. The best response to that argument, incidentally, comes from Ally Fogg, who wrote recently: What you fail to understand is that the use of hate speech, threats and bullying to terrify and intimidate people into silence or away from certain topics is a far bigger threat to free speech than any legal sanction. I couldn't have put it better myself. On 12 June, I wrote about American blogger Anita Sarkeesian, who launched a Kickstarter programme to raise $6,000 to research "tropes vs women in videogames". Since then, Anita Sarkeesian has been subjected to a good deal more harassment. You are so right, sir.