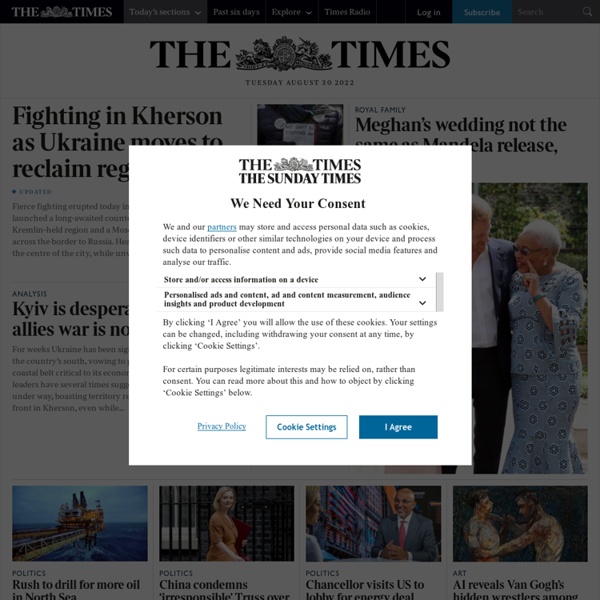 PM warns Putin in Ukraine showdown Sonia Elks, Francis Elliott in Brisbane, Bernard Lagan in Sydney Last updated at 10:58AM, November 15 2014 David Cameron warned Vladimir Putin that Russia faces increasing isolation and further sanctions if it continues to destabilise Ukraine by intervening in the crisis. The Prime Minister said that Moscow faces a “fork in the road” over its relations with the world if it continues to flout an agreement to remove its troops from Ukraine during a showdown with his Russian counterpart on the sidelines of a tense G20 summit in Brisbane. He said that world leaders are ready to introduce more sanctions if Moscow does not respect the strained Minsk peace agreement in Ukraine, which has never been fully adhered to.

Home BBC News Home Top Stories Trump to drop Iran deal, Macron says France's leader admits he may have failed to persuade his US counterpart to stick to the 2015 accord. Related content stanfordracing.org Latest News Summer 2009 — Take a video tour of Stanley's exhibit at the Smithsonian with lead engineer Mike Montemerlo. Nov. 5, 2007 — Junior, which drove nearly flawlessly during the DARPA Urban Challenge on Saturday, was awarded second place, and a $1 million prize, in a DARPA ceremony Sunday morning. Download Videos: NQE Test A, Test B, and Test C. These and other videos can be found on Video page. Joining the team to support our efforts are:

About OECD OECD Home › About the OECD Our mission The mission of the Organisation for Economic Co-operation and Development (OECD) is to promote policies that will improve the economic and social well-being of people around the world. Which side of the road do they drive on? Edited by Brian Lucas, brian@brianlucas.ca IntroductionHistorical questionsThe list of countriesExceptionsBorder crossingsChanging from one side to the otherThe cars are different tooWhat about trains?What about boats?What about pedestrians?What about aircraft?

The Company NDTV New Delhi Television is, and has been for a quarter century, a pioneer in India’s news television. Founded in 1988 by Radhika Roy and Prannoy Roy, NDTV is today the most watched and the most respected news and lifestyle network in India. From the path-breaking “The World This Week” (nominated as one of India’s 5 best television programs since Independence), the first private news on Doordarshan “The News Tonight”, producing India’s first 24-hour news channel “Star News” and the country’s first ever 2-in-1 channel NDTV has been in the forefront of every single news revolution. Its channels NDTV 24x7 (English), NDTV India (Hindi) and India’s first ever 2-in-1 channel NDTV Profit-NDTV Prime (Business and Infotainment) continue to raise the standards of journalism with innovative programming and uncompromising integrity. Incisive and creative, the channels target the global Indian with news that is credible, true and fast.

Can Think&#039;s electric car revolutionize the auto industry? - August 1, 2007 (Business 2.0 Magazine) -- Three pinstriped London investors stand outside an electric car factory in the green fields of the Norwegian countryside, waiting their turns to test-drive a stylish two-seater called the Think City. But first, Think CEO Jan-Olaf Willums takes the wheel. While the moneymen fiddle with their BlackBerrys, Willums, looking slightly rumpled like the academic he once was, turns the ignition, and the stub-nosed coupe silently rolls toward an open stretch of pavement. AUSTRAILIAN BROADCASTING CORPORATION Updated Tue 7 Sep 2010, 1:13pm AEST Guinness World Records has dubbed a 70-centimetre-tall Colombian as the world's shortest living man. Nino Hernandez, who weighs only 10 kilograms, has not grown since he was two years old.

Inflatable electric car can drive off cliffs It's hard to say what the most intriguing thing about XP Vehicles' inflatable car is. Maybe it's that the car can travel for up to 2,500 miles on a single electric charge (the distance across the US is roughly 3,000 miles). Or maybe it's the fact that you buy the car online, it gets shipped to you in two cardboard boxes, and the estimated assembly time is less than two hours. Perhaps it's that the car is made out of "airbags" - the same polymer materials used to cushion NASA's rovers when they landed on Mars. Then again, it could be the company's claim that you can drive the car off a cliff without serious injury, and that it will float in a flood or tsunami. Together, these features characterize the Whisper, XP Vehicles' solution to the oil crisis.

Some EV History / History of Electric Cars and other Vehicles Last updated 2009.11.13 Introduction | Acknowledgements | Other Sources of EV History Information Your Information Is Invited | Why are there so few electric cars? [A] [B] [C] [D] [E] [F] [G] [H] [I] [J] [K] [L] [M] [N] [O] [P] [Q] [R] [S] [T] [U] [V] [W] [X] [Y] [Z] [Numbers] Officially Official: GM reveals the 2011 Chevy Volt! Click above for high-res gallery of 2011 Chevy Volt Everyone who has been waiting with bated breath for the past year and a half to see the production version of the Chevy Volt can now breathe a big sigh of relief. After some extremely unflattering press shots shots were accidentally released last week, people were extremely disappointed with what appeared to be little more than a Prius clone.