Learn about the U.S. Constitution, the Bill of Rights, the Declaration of Independence and much more! 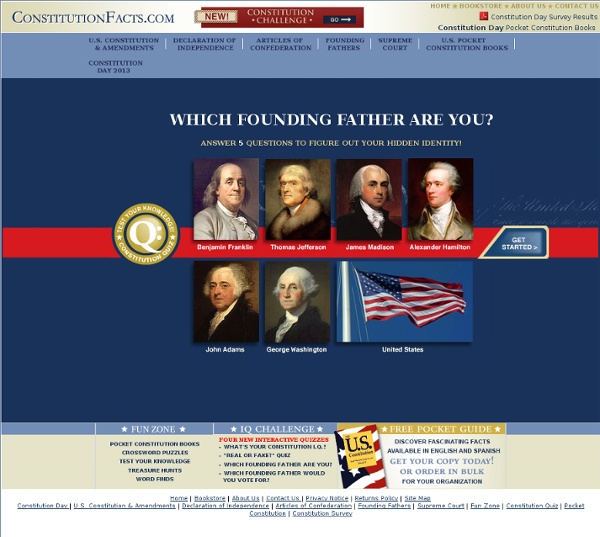 Freedom: A History of US. Webisode 1: Independence. Introduction or a century and a half Britain, the mother country, and the North American colonies, her children, were as close as a parent and children could be. What happened to change that relationship? Perhaps the colonies outgrew childhood and wanted the independence that adults enjoy. The trouble began after the French and Indian War, which left Britain with tremendous debt. Why shouldn't the colonists pay some of that debt? To the colonists, the answer was easy: They shouldn't have to pay for it because they had no representation in the British Parliament that levied the taxes for the colonists to pay. To be subject to laws in which they had no voice amounted to tyranny. Parliament tried to tax sugar and tea. In 1775, Patrick Henry expressed the indignation of many who until this time considered themselves British subjects. That is exactly what the delegates to the Second Continental Congress did on July 4, 1776. In signing, they risked their lives and fortunes.

LIBERTY! . Chronicle of the Revolution . Boston 1774 Hardliners in the British government, looking for reasons to clamp down on the Bay colony, found their cause last December when the Sons of Liberty made a salty Darjeeling of Boston Harbor. 342 crates of tea were dumped into the ocean in response to a parliamentary act which imposed restrictions on the purchase of tea in the colonies. For his part, Franklin stood stoically through the ordeal, but was heard to mutter "I shall make your king a little man for this," to Wedderburn as both left the council at the end of the day. The tea party, Franklin's roasting in Parliament and now the closing of Boston harbor exemplify the hardening of positions on both sides of the Atlantic. The Auschwitz Album To view the Auschwitz Album click here. The Auschwitz Album is the only surviving visual evidence of the process leading to the mass murder at Auschwitz-Birkenau. It is a unique document and was donated to Yad Vashem by Lilly Jacob-Zelmanovic Meier. The photos were taken at the end of May or beginning of June 1944, either by Ernst Hofmann or by Bernhard Walter, two SS men whose task was to take ID photos and fingerprints of the inmates (not of the Jews who were sent directly to the gas chambers). Early summer 1944 was the apex of the deportation of Hungarian Jewry. The photos in the album show the entire process except for the killing itself. The purpose of the album is unclear. Lilly never hid the album and news of its existence was published many times. In 1994 the album was restored in Yad Vashem's conservation laboratory and information on each one of the photos was typed into the computerized databank of the archive. There are 56 pages and 193 photos in the album. Further reference:

untitled War and medicine British Sign Language description Audio description Hippocrates is quoted as saying that ‘war is the only proper school for a surgeon’. Certainly, medical services have been associated with the military since the days of Ancient Greece. This relationship declined in the Middle Ages, but after a radical reorganisation of medicine during the 1700s the links between the two grew stronger with each passing year. War and new jobs in medicine There is much debate about how much influence war and medicine have had on each other. The human suffering caused by war War causes distress, displacement and death. Soldiers and disease Until the 1900s, wars impacted on soldiers more than the civilian population. New weapons, new wounds in the 1500s By the 1500s and 1600s guns and cannons replaced swords and spears, presenting army surgeons with new types of wounds. Developments in treatments through war The First World War: disease and developments Women in the First World War The impacts of war