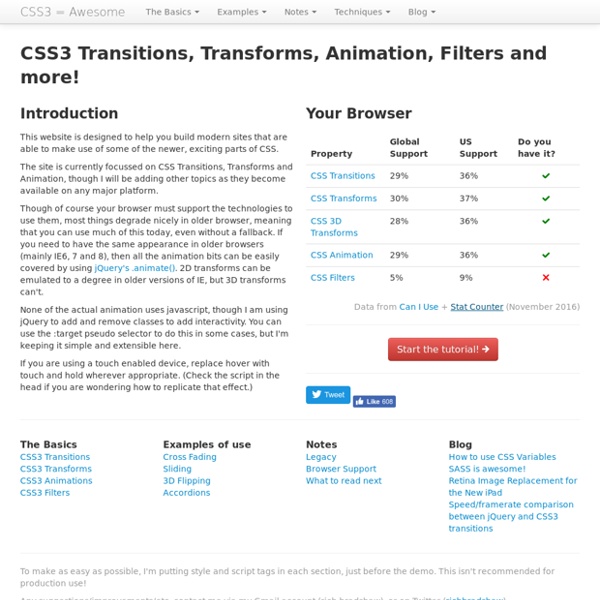 Introduction This website is designed to help you build modern sites that are able to make use of some of the newer, exciting parts of CSS. The site is currently focussed on CSS Transitions, Transforms and Animation, though I will be adding other topics as they become available on any major platform. Though of course your browser must support the technologies to use them, most things degrade nicely in older browser, meaning that you can use much of this today, even without a fallback. If you need to have the same appearance in older browsers (mainly IE6, 7 and 8), then all the animation bits can be easily covered by using jQuery's .animate(). 2D transforms can be emulated to a degree in older versions of IE, but 3D transforms can't. None of the actual animation uses javascript, though I am using jQuery to add and remove classes to add interactivity.

Animation in CSS3 In this article you'll learn what you need to know to get started with CSS3 animations. "Animating" with CSS used to be limited to hovering effects. With :hover and :focus pseudo classes we've been able to change color, size, background-color, position, and many other CSS properties based on user action. The iOS 7 Design Cheat Sheet - Ivo Mynttinen / User Interface Designer Everything you need to know when it comes to iOS 7. This article is outdated. View new version The data presented on this Cheat Sheet does not contain the latest updates of iOS 8 and the new Apple devices released mid 2014 (iPhone 6, 6 Plus, iPad Air 2). With the release of iOS 7, app designers and developers will need to adjust their visual language to match the new "flat" design of iOS.

CSS3 & HTML5 Experiments That Will Blow Your Mind - 47 Examples While I was checking out various CSS3 and HTML5 experiments I also looked at the first ones that appeared for these new web technologies and they weren’t at all impressive, at the moment. Back then, though, they were insanely awesome. They were something that we have never seen before. Howto Create An Image Slider With Pure CSS3 Image slider is a popular effect and often used in portfolio sites and blogs. Most of these sliders are created by Javascript. But with CSS3′s strength, we can implement an image slider with only pure CSS3. This article will guide you to do that. 1. The HTML Markup

47 Amazing CSS3 Animation Demos Here is a compilation of 47 jaw-dropping CSS3 animation demos. They demonstrate the possibilities of the CSS3 transform and transition property. Some are very useful and can be used as Javascript alternatives. Starter's Guide to iOS Design As someone who does work on both the development and design side of iOS apps I find that many designers struggle with the transition to UI work, or with the different processes involved in iPhone and iPad app design. In this guide I'll describe the deliverables you'll be expected to produce, outline the constraints of the medium and introduce fundamental iOS and UI design concepts. The Medium Knowing your medium and its quirks is an important part of being a good designer. I'm sure you've been witness to large print-outs with horrible pixelation artefacts - the result of misunderstanding print media.

Understanding CSS Filter Effects This article discusses APIs that are not yet fully standardized and still in flux. Be cautious when using experimental APIs in your own projects. Introduction jScrollPane - cross browser styleable scrollbars with jQuery and CSS jScrollPane is a cross-browser jQuery plugin by Kelvin Luck which converts a browser's default scrollbars (on elements with a relevant overflow property) into an HTML structure which can be easily skinned with CSS. jScrollPane is designed to be flexible but very easy to use. After you have downloaded and included the relevant files in the head of your document all you need to to is call one javascript function to initialise the scrollpane.

CSS Animation Generator CSS animations were added at the start of CSS3 which allows you to transition from one CSS style to another. To use a CSS animation you will have to start styling the element and a number of keyframes to define the transition from start to end of the animation. Before CSS animation was available, the way you would make an element change styling would be to use JavaScript to change an element's styling properties in a certain order. The advantages of using CSS animation over JavaScript driven animations is that they run smoother than JavaScript, which commonly skipped keyframes. Browser rendering engines are built to work better with CSS animation. They are also easier to develop as all coding of the animation is done in CSS and you just select which properties to change at certain keyframes.

PortKit: UX Metaphor Equivalents for iOS & Android PortKit shows you each Cocoa UI Element in iOS 6 / iOS 7 and its Android widget version, side by side, so you can compare and find the correct equivalent when porting an app. We are a Brisbane based company that develops iPhone & iPad Apps and Android Applications and we wanted a simple way to visualise, reference and compare UI elements, and have quick access to documentation and the respective naming conventions. Due to the popularity of this post we decided to add a tonne of handy resources, tools, and tips that we use day to day available at the bottom of this post.

Using CSS Transitions on Auto Dimensions By Brandon Smith On We've all been there. You've got an element you want to be able to collapse and expand smoothly using CSS transitions, but its expanded size needs to be content-dependent. You've set transition: height 0.2s ease-out. You've created a collapsed CSS class that applies height: 0. You try it out, and... the height doesn't transition. Axure iPhone Widgets Library Hundreds of Axure user interface widgets for prototyping iPhone apps + dozens of royalty free icons to use in your prototype and final design! Screenshots Or directly update quantity in cart for discount Limited Time Bundle Deal: Get All Widgets Libraries For 75% Off! Purchase Axutopia bundle, and get all 9 Axure widget libraries for 75% off the total price (you save $294). You also get every future Axure Widget Library for free, forever!!