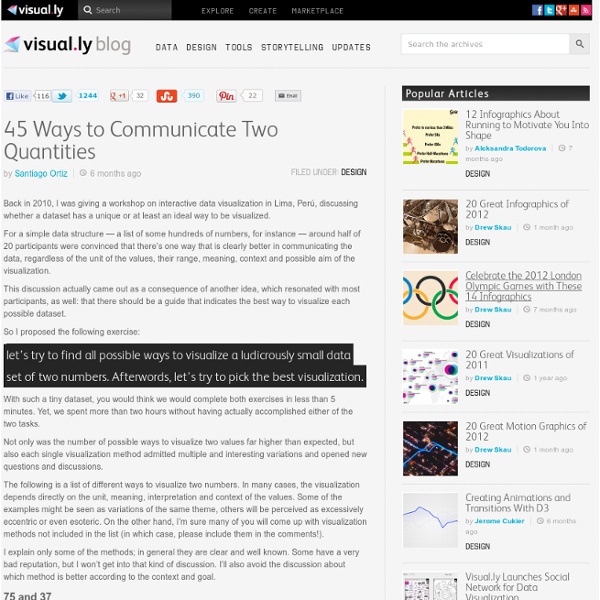 Back in 2010, I was giving a workshop on interactive data visualization in Lima, Perú, discussing whether a dataset has a unique or at least an ideal way to be visualized. For a simple data structure — a list of some hundreds of numbers, for instance — around half of 20 participants were convinced that there’s one way that is clearly better in communicating the data, regardless of the unit of the values, their range, meaning, context and possible aim of the visualization. This discussion actually came out as a consequence of another idea, which resonated with most participants, as well: that there should be a guide that indicates the best way to visualize each possible dataset. So I proposed the following exercise: let’s try to find all possible ways to visualize a ludicrously small data set of two numbers. With such a tiny dataset, you would think we would complete both exercises in less than 5 minutes. The following is a list of different ways to visualize two numbers. 75 and 37 5. bars

20+ Tools to Create Your Own Infographics A picture is worth a thousand words – based on this, infographics would carry hundreds of thousands of words, yet if you let a reader choose between a full-length 1000-word article and an infographic that needs a few scroll-downs, they’d probably prefer absorbing information straight from the infographic. What’s not to like? Colored charts and illustrations deliver connections better than tables and figures and as users spend time looking back and forth the full infographic, they stay on the site longer. Plus, readers who like what they see are more likely to share visual guides more than articles. While not everyone can make infographics from scratch, there are tools available on the Web that will help you create your very own infographics. Read Also: The Infographic Revolution: Where Do We Go From Here? What About Me? “What About Me?” Vizualize.me Vizualize.me allows you to create an online resume format that is beautiful, relevant and fun, all with just one click. Piktochart easel.ly

Against Transparency Against Transparency In 2006, the Sunlight Foundation launched a campaign to get members of Congress to post their daily calendars on the Internet. "The Punch-Clock Campaign" collected pledges from ninety-two candidates for Congress, and one of them was elected. I remember when the project was described to me by one of its developers. In any case, the momentum was on her side. And not just in politics. How could anyone be against transparency? The naked transparency movement marries the power of network technology to the radical decline in the cost of collecting, storing, and distributing data. The most obvious examples of this new responsibility for disclosure are data about the legislative process: the demand, now backed by the White House, that bills be posted to the Internet at least twenty-four hours before they are voted upon, or that video of legislative hearings and floor debate be freed from the proprietary control of one (easily disciplined) entity such as C-SPAN.

Truthiness American television comedian Stephen Colbert coined the word in this meaning[2] as the subject of a segment called "The Wørd" during the pilot episode of his political satire program The Colbert Report on October 17, 2005. By using this as part of his routine, Colbert satirized the misuse of appeal to emotion and "gut feeling" as a rhetorical device in contemporaneous socio-political discourse.[3] He particularly applied it to U.S. President George W. Bush's nomination of Harriet Miers to the Supreme Court and the decision to invade Iraq in 2003.[4] Colbert later ascribed truthiness to other institutions and organizations, including Wikipedia.[5] Colbert has sometimes used a Dog Latin version of the term, "Veritasiness".[6] For example, in Colbert's "Operation Iraqi Stephen: Going Commando" the word "Veritasiness" can be seen on the banner above the eagle on the operation's seal. Adoption of the term by Colbert[edit] Coverage by news media[edit] The New York Times coverage and usage[edit]

Are fact-checking sites a symptom of the media not doing its job? | Bronwen Clune It is a fact universally acknowledged that a journalist in possession of a good story must insist it be based in truth. Or is it? In Australia, where an election looms, we’re about to enter a newly reconfigured media landscape with the launch of three sites dedicated to fact-checking the political statements of those vying for our votes. Does the popularity of these fact-checking sites suggest that journalism is failing to adequately perform its function? Media writer Tim Dunlop thinks it does, and put it rather succinctly in a recent column claiming that fact-checking sites are a symptom of failing media, but not a cure. Facts are, after all, one of the essential building blocks of good journalism: you can’t have good journalism without them. The first Australian site to enter the fact-checking business was PolitiFact Australia, the first licensee of the Pulitzer-prize winning US site PolitiFact.com (how deep those ties are remains unclear). Exactly. Ask hard questions.

Studio 20 @ Arthur L. Carter Journalism Institute This fall, Studio 20 added veteran journalist Kevin Convey to its staff ranks. Having recently parted ways with the New York Daily News, where he oversaw the predominantly print newsroom transition to digital, Convey took over teaching our first-semester “Studio 1” innovation workshop. Three weeks into the semester, we talk to him about innovation—in the newsroom and in class—and the path he took from well seasoned print journalist to strong digital proponent and, now, graduate professor. You started out as a print journalist but became a strong advocate of the “digital first” school of thinking. I actually started in journalism at the age of 9 when I printed up a neighborhood newsletter on a toy press my parents had given me for Christmas. Then I went to Boston and started my first stint at The Boston Herald. It was as the Herald and then at the Daily News that I really started pushing the digital thing. I came in and I just knew this was death for the institution.

accountability technologies Humanity interview with James Ferguson, pt. 3: what future politics and development? | Penn Press: Humanity Humanity: This question of politics connects to the key thesis of The Anti-Politics Machine, concerning the depoliticizing effect of development. The idea of depoliticization has become the lodestone of much current historiography of development. Now, twenty years on from the initial publication of the book, does the success of this thesis surprise you? James Ferguson: It remains an important move, to be able to take procedures that are described as purely technical and to demonstrate how and where they involve things that are more than just technical, how and where they may involve a politics that requires digging in order to bring it into visibility. H: It is true that in the case of development work a lot of people are aware of the barely hidden political agendas behind technical initiatives, even if they do not put them in their own report. JF: Ha! H: So here we are in decade seven of the development era. I would rather treat this as an empirical question.

Latin American professors say U.S. media coverage of Snowden affair is full of bias The U.S. media, Latin America and Snowden's asylum Edward Snowden, the National Security Agency leaker made famous for revealing classified details of a U.S. surveillance program, has just submitted a request for temporary asylum in Russia. Snowden, whose spent the last several weeks at the Moscow airport claims he could face persecution, torture and even death if he's returned to the United States. If his asylum request is granted he could stay in Russia for the next year. But Russia wasn't the only country that Snowden considered for asylum. Now, a group of Latin American scholars and professors have sent out a letter to media outlets across the United States addressing the media's portrayal of Bolivia, Ecuador and Venezuela in relation to the Edward Snowden case. You can read the entire letter here: An Open Letter to the Media - Snowden and Latin America

The Rise of Longform Newspaper Writing, 1950s-2003 Fink and Schudson document the rise of “contexual journalism” before the longform meltdown. Katherine Fink and Michael Schudson have a fantastic new paper called “The Rise of Contextual Journalism, 1950s-2003,” to be published this summer in the British* scholarly journal, Journalism. It defines—and documents—the rise of a form of reporting that is deeper, more independent, less deferential to government, than conventional, run-of-the-mill news stories. The paper is sort of a high-end prequel to the informal post I did in January, “Major Papers’ Longform Meltdown,” on the stunning decline in longform newspaper writing at four major papers, since 2003. Fink and Schudson here are—in a way—documenting the rise before the fall. Fink is a Columbia Journalism Phd candidate. Think about it this way: Everyone understands the limitations of the MSM, both now and certainly, too, in recent decades, aka, “back in the day,” sometimes referred to as the Golden Age. Fink and Schudson define it this way:

International Journal of Internet Science Critical Hacktivism by Dan McQuillan In this post I want to lay out an approach to social technology that I'm calling critical hacktivism. It tries to connect the affordances of social technology to social innovation in a way that evades capture by existing institutional and knowledge structures. If the current crisis is a legacy of these structures then critical hacktivism asserts that we can create alternatives through the practice of social prototyping. We begin with the vexed question of technology's impact on society. Critical hacktivism adopts the notion of 'affordances' proposed by Hutchby[2], a non-determinist approach that still values the particular materiality of technologies. I will use the idea of affordances to look at learning and hacking, two of the precursors of critical hacktivism. The idea that internet technologies can help redefine forms of learning was recognised in Hase & Kenyon's 2001 paper ‘From Andragogy to Heutagogy’. The other precursor of critical hacktivism is hacking itself.