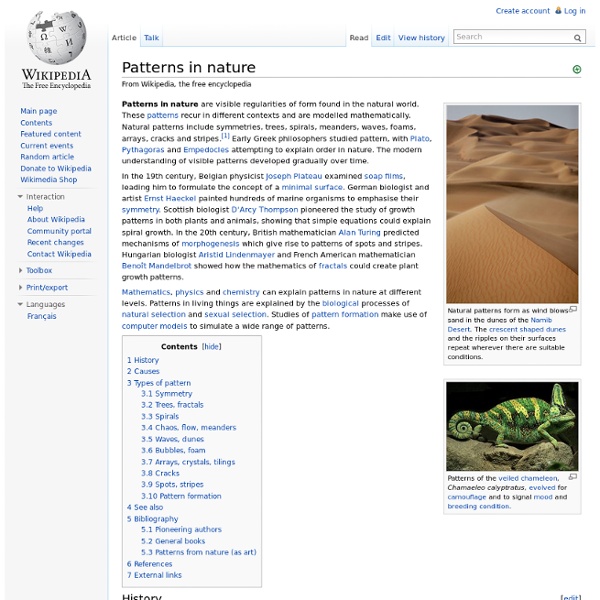 Natural patterns form as wind blows sand in the dunes of the Namib Desert. The crescent shaped dunes and the ripples on their surfaces repeat wherever there are suitable conditions. Patterns in nature are visible regularities of form found in the natural world. In the 19th century, Belgian physicist Joseph Plateau examined soap films, leading him to formulate the concept of a minimal surface. Mathematics, physics and chemistry can explain patterns in nature at different levels. History[edit] In 1202, Leonardo Fibonacci (c 1170 – c 1250) introduced the Fibonacci number sequence to the western world with his book Liber Abaci.[5] Fibonacci gave an (unrealistic) biological example, on the growth in numbers of a theoretical rabbit population.[6] In 1917, D'Arcy Wentworth Thompson (1860–1948) published his book On Growth and Form. The American photographer Wilson Bentley (1865–1931) took the first micrograph of a snowflake in 1885.[10] Causes[edit] Types of pattern[edit] Symmetry[edit]

10 Amazing Examples of Architecture Inspired by Mathematics The link between math and architecture goes back to ancient times, when the two disciplines were virtually indistinguishable. Pyramids and temples were some of the earliest examples of mathematical principles at work. Today, math continues to feature prominently in building design. We’re not just talking about mere measurements — though elements like that are integral to architecture. Mobius Strip Temple You probably made a Mobius Strip in grade school math class, so you should remember that the geometric form is unique in that there is no orientation. Mathematics and architecture Mathematics and architecture are related. Architects intentionally or accidentally use mathematical proportions to shape buildings. In ancient Greece, the golden ratio may have been used to lay out some buildings. In Renaissance architecture, symmetry and mathematical proportion were deliberately emphasized. In the twentieth century, styles such as modern architecture and Deconstructivism explored different geometries to achieve desired effects. Ancient times[edit] The Parthenon has been claimed to follow the proportions of the golden rectangle The ancient Egyptian pyramids at Giza have mathematical proportions, either by accident or by design. The Virupaksha temple at Hampi has a fractal-like structure where the parts resemble the whole. Ancient Greece[edit] In Greek architecture, the golden rectangle (also known as Phi, the golden section, golden ratio, or golden mean), served as a canon for planning architectural designs. Islamic architecture[edit] Other civilizations[edit] Renaissance[edit]

10 Of the Most Unusual Homes in the World Moving into and setting up your new home is definitely one of the most exciting things – especially for those who never find enough outlets for their ideas and designs. Throughout history, people have gone from caves to huts to castles to blocks of flats – and nowadays, seems like you can find an example of just anything. Some people are forced to get creative because of some physical restrictions – like small or unusual space – while others do so just because. If you feel like you could use some inspiration to design your future home – or just like checking out the weird ideas some people have – this post is just for you! Would you choose to live in a former church, or a renovated water tower? Or how about a completely transparent house, or one that is a spitting image of the Flintstones’ cave? 1. Inspired by our ancient predecessors, who inhabited trees, this completely transparent “House NA” in Japan offers you a lot of day light, but not much privacy. 2. 3. 4. 5. 6. 7. 8. 9. 10.

Top 33 World’s Strangest Buildings (sorted by 4.520 visitors votes) If you are bored panda like me, you know that the best way to fight boredom is finding all kind of weird stuff. And now, that you’ve found that page, you are just about to kill your boredom. Do you love architecture? [Read more...] Strangebuildings.com has a wonderful collection of the world’s most unusual architecture and together with Bored Panda presents you an incredible list of 33 strangest buildings in the world, and best of all, it’s not just another random list, but it is based on 4.520 unique visitor votes. Well enough of those boring talks, prepare your hand for scrolling down the list, while bored panda eats another bamboo leaf. P.S.: if you want to find out more information about the building (date it was built, architect, interior shots) don’t forget to visit Strangebuildings.com. 1. (Bamboo leaf for angelocesare via www.boredpanda.com) 2. (Bamboo leaf for brocha via strangebuildings.com) 3. (Bamboo leaf for Jsome1 via strangebuildings.com) 4. 5. 6. 7. 8. 9. 10. 11. 12. 13. 14.