MOOCs are really a platform 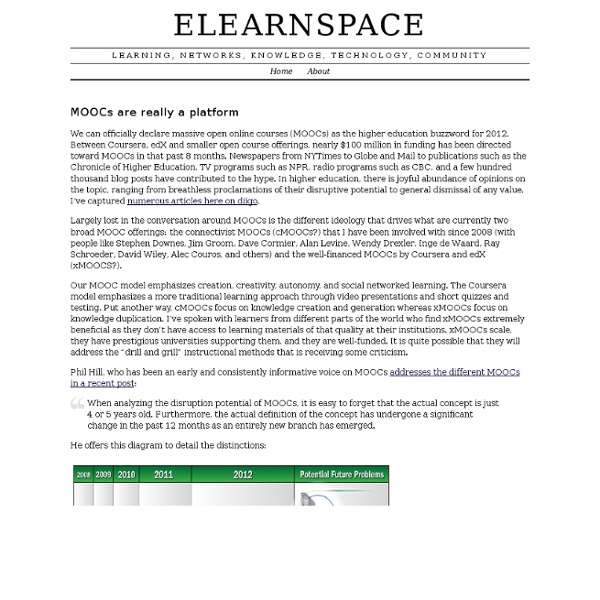 We can officially declare massive open online courses (MOOCs) as the higher education buzzword for 2012. Between Coursera, edX and smaller open course offerings, nearly $100 million in funding has been directed toward MOOCs in that past 8 months. Newspapers from NYTimes to Globe and Mail to publications such as the Chronicle of Higher Education, TV programs such as NPR, radio programs such as CBC, and a few hundred thousand blog posts have contributed to the hype. In higher education, there is joyful abundance of opinions on the topic, ranging from breathless proclamations of their disruptive potential to general dismissal of any value. I’ve captured numerous articles here on diigo. Largely lost in the conversation around MOOCs is the different ideology that drives what are currently two broad MOOC offerings: the connectivist MOOCs (cMOOCs?) Our MOOC model emphasizes creation, creativity, autonomy, and social networked learning. He offers this diagram to detail the distinctions:

escaping the caduceus of technology-fuelled privatisation and student debt When the culture’s drowning in a bad dream/Save myself, save myself and When the old religion is the new greed/Save myself, save myself and They sabotaged the levee, killed gris gris/Save myself, save myself and When the vultures copyright the word free/Save myself, I got to save myself As California Goes? California has taken centre stage in the discussions around online learning and MOOCs in recent weeks, prompted by passage of tax increases (see more and more) to cover rising deficits in the state's higher education system. An organization called 20 Million Minds (20MM) organized a conference to discuss proposals. E-Literate provided very good coverage of the event, which was called Re:Boot California Higher education - a post listing statements made before the conference, some opening thoughts from Michael Feldstein, Senate President Pro Tem Darrell Steinberg's introduction, and bottleneck courses. At WCET, Phil Hill describes the state's increasing rolein the governance of the system.

Elite education for the masses They included Patrycja Jablonska in Poland, Ephraim Baron in California, Mohammad Hijazi in Lebanon and many others far from Baltimore who ordinarily would not have a chance to study at the elite Johns Hopkins Bloomberg School of Public Health. They logged on to a Web site called Coursera and signed up. They paid nothing for it. These students, a sliver of the more than 1.7 million who have registered with Coursera since April, reflect a surge of interest this year in free online learning that could reshape higher education. The phenomenon puts big issues on the table: the growth of tuition, the role of a professor, the definition of a student, the value of a degree and even the mission of universities. “Massive open online courses,” or MOOCs, have caught fire in academia.

Social Experiment? Learning Experience? Tempest in a Teapot? Coursera's recently under-reported soap-opera. Well, I am not quite sure what to make of this just yet, but I am keeping an eye on the situation to see how it gets resolved. What situation am I talking about? The seemingly under-reported (or not reported at all) situation happening in the course Teaching Goes Massive: New Skills Required, which is offered by Paul-Olivier Dehaye of the University of Zurich. The Single Most Important Experiment in Higher Education - Jordan Weissmann Online education platform Coursera wants to drag elite education into the 21st century. Now, it's getting buy-in from the academy. (Reuters) As of yesterday, a year-old startup may well have become the most important experiment yet aimed at remaking higher education for the Internet age. At the very least, it became the biggest.

MOOCs are Marketing Earlier this week, Georgia Tech and eleven other higher education institutions announced their participation in Coursera, a company that hosts online courses. Reactions have been predictably dramatic, as exemplified by Jordan Weissman's panegyric in the Atlantic, titled The Single Most Important Experiment in Higher Education. I'll spare observations on the obvious problems with Weissman's article, like the witless claim that lectures as web video somehow "reinvent" the lecture. Or the fact that Weissman published an article two weeks ago titled Why the Internet Isn't Going to End College As We Know It. Take this excerpt instead: