218 words to use instead of said from SPWbooks 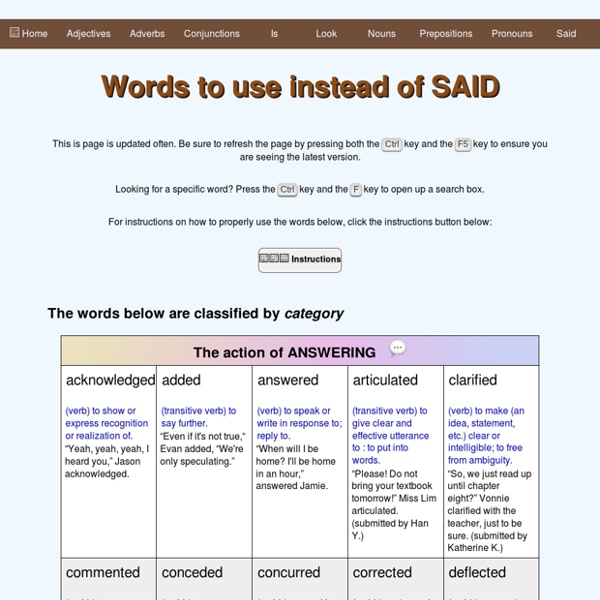 25 Things You Should Know About Word Choice - StumbleUpon 1. A Series Of Word Choices Here’s why this matters: because both writing and storytelling comprise, at the most basic level, a series of word choices. Words are the building blocks of what we do. They are the atoms of our elements. 20 Obsolete English Words that Should Make a Comeback Photo: Katherine Hodgson If we all start using them, these words can be resurrected. DURING MY UNDERGRADUATE studies as a Linguistics major, one of the things that struck me most is the amazing fluidity of language. New words are created; older words go out of style. CALLIHOO Writing Helps Character Feelings You can describe your character's feelings in more exact terms than just "happy" or "sad." Check these lists for the exact nuance to describe your character's intensity of feelings. SF Characters | SF Items | SF Descriptors | SF Places | SF EventsSF Jobs/Occupations | Random Emotions | Emotions List | Intensity of Feelings

Courtesy Titles and Honorifics By Mark Nichol There was a time when it was considered proper form to refer indirectly to people in writing with a courtesy title or an honorific — a designation that identifies gender, profession, or title of nobility. That time, to the great relief of writers everywhere, has passed. Of course, in direct address — in a salutation, or when otherwise referring to someone in writing (as in a transcription) — it is and perhaps always will be proper to identify people with such markers: “Mr. 4 Options for Improving Your Fiction We writers can be impatient—not only with the process of writing and getting published, but with ourselves for not being perfect from the get-go. We readily accept the need for intensive training and ongoing skills development for our day jobs, but when it comes to writing, we often expect to just be able to ‘do it’. I used to be a teacher. I spent four years completing degrees in English and education, then took three more professional development courses to expand my qualifications. Once I received my first full-time classroom position, I attended workshops every few months.

Wordiness, Wordiness, Wordiness List absolutely essential = essential aforementioned = DELETE a bigger/greater/higher/larger degree of = more a considerable amount of = DELETE OR BE SPECIFIC a decreased number of = fewer a distance of 28 kilometers = 28 kilometers English Proverbs Nothing defines a culture as distinctly as its language, and the element of language that best encapsulates a society's values and beliefs is its proverbs. The graphic to the right shows the words that are used in English proverbs, with the size of each word indicating how often it occurs (click for a bigger image). It's interesting to note that the two most common words in English proverbs are 'good' and 'never'. A bit of armchair psychology leads to the conclusion that, if proverbs really do reflect belief, then the English are (or at least were when these proverbs were coined) inclined to be virtuous but negative - not so far from the truth perhaps? Proverbs are short and pithy sayings that express some traditionally held truth. They are usually metaphorical and often, for the sake of memorability, alliterative.

Kirbside This post has been a long time coming, but I do still want to talk about some of the trips I took last fall. One of the things I’ve loved most about my writing career has been the opportunity to travel, to meet new people and have wonderful experiences I wouldn’t otherwise get to have. So without further ado… Portland Scrivener Writing Software “The biggest software advance for writers since the word processor.” —Michael Marshall Smith Grow your ideas in style

» New York Times 50 Most Challenging Words (defined and used) - Currently Obsessed The New York Times recently published a list of 50 fancy words that most frequently stump their readership. They are able to measure this data thanks to a nifty in-page lookup mechanism, which you can try here. Try double-clicking the word “epicenter”. 45 ways to avoid using the word 'very' Three Telling Quotes About ‘Very’ Substitute ‘damn’ every time you’re inclined to write ‘very;’ your editor will delete it and the writing will be just as it should be. ~Mark Twain‘Very’ is the most useless word in the English language and can always come out. More than useless, it is treacherous because it invariably weakens what it is intended to strengthen.