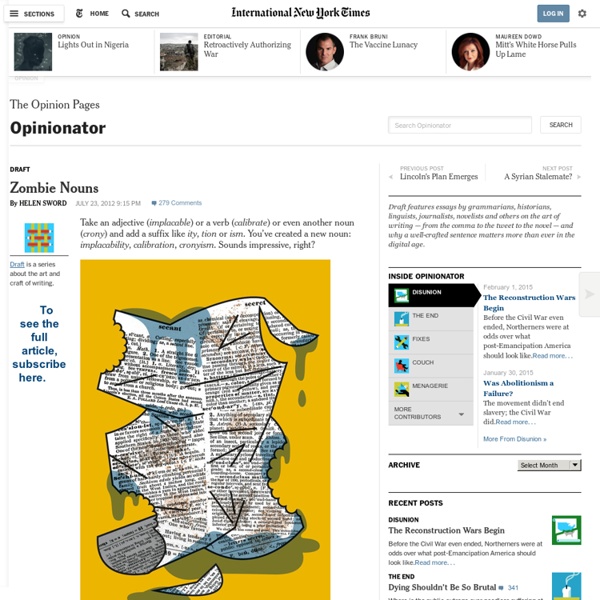 Draft is a series about the art and craft of writing. Take an adjective (implacable) or a verb (calibrate) or even another noun (crony) and add a suffix like ity, tion or ism. You’ve created a new noun: implacability, calibration, cronyism. Sounds impressive, right? Nouns formed from other parts of speech are called nominalizations. Academics love them; so do lawyers, bureaucrats and business writers. The proliferation of nominalizations in a discursive formation may be an indication of a tendency toward pomposity and abstraction. The sentence above contains no fewer than seven nominalizations, each formed from a verb or an adjective. Writers who overload their sentences with nominalizations tend to sound pompous and abstract. Only one zombie noun – the key word nominalizations – has been allowed to remain standing. At their best, nominalizations help us express complex ideas: perception, intelligence, epistemology. Elena Giavaldi Most major scientific theories rebuff common sense. Related:  Lexical Change • Creative Writing

7 Words that Came About from People Getting Them Wrong 1. Pea Originally the word was "pease," and it was singular. ("The Scottish or tufted Pease..is a good white Pease fit to be eaten.") 2. The same thing happened to "cherise" or "cheris," which came from Old French "cherise" and was reanalyzed as a plural. 3. "Apron" also came into English from Old French and was originally "napron" ("With hir napron feir..She wypid sofft hir eyen.") 4. Umpire lost its 'n' from the same sort of confusion. 5. The confusion about which word the 'n' belonged to could end up swinging the other way too. 6. The 'n' also traveled over from the "an" to stick to "nickname," which was originally "ekename," meaning "added name." 7. Alligator came to English from the Spanish explorers who first encountered "el lagarto" (lizard) in the New World. All example quotes come from the Oxford English Dictionary.

Neil Gaiman's 8 Rules of Writing By Maria Popova In the winter of 2010, inspired by Elmore Leonard’s 10 rules of writing published in The New York Times nearly a decade earlier, The Guardian reached out to some of today’s most celebrated authors and asked them to each offer his or her commandments. After Zadie Smith’s 10 rules of writing, here come 8 from the one and only Neil Gaiman: WritePut one word after another. Find the right word, put it down.Finish what you’re writing. Whatever you have to do to finish it, finish it.Put it aside. For more timeless wisdom on writing, see Kurt Vonnegut’s 8 rules for a great story, David Ogilvy’s 10 no-bullshit tips, Henry Miller’s 11 commandments, Jack Kerouac’s 30 beliefs and techniques, John Steinbeck’s 6 pointers, and Susan Sontag’s synthesized learnings. Image by Kimberly Butler

George Orwell: Politics and the English Language Most people who bother with the matter at all would admit that the English language is in a bad way, but it is generally assumed that we cannot by conscious action do anything about it. Our civilization is decadent and our language — so the argument runs — must inevitably share in the general collapse. It follows that any struggle against the abuse of language is a sentimental archaism, like preferring candles to electric light or hansom cabs to aeroplanes. Underneath this lies the half-conscious belief that language is a natural growth and not an instrument which we shape for our own purposes. Now, it is clear that the decline of a language must ultimately have political and economic causes: it is not due simply to the bad influence of this or that individual writer. These five passages have not been picked out because they are especially bad — I could have quoted far worse if I had chosen — but because they illustrate various of the mental vices from which we now suffer. 1. 2. 3. 4.

Litigation Support Industry: eDiscovery Business News and Information Blog Exquisite corpse an exquisite corpse Exquisite corpse, also known as exquisite cadaver (from the original French term cadavre exquis) or rotating corpse, is a method by which a collection of words or images is collectively assembled. Each collaborator adds to a composition in sequence, either by following a rule (e.g. "The adjective noun adverb verb the adjective noun," as in “The green duck sweetly sang the dreadful dirge”) or by being allowed to see only the end of what the previous person contributed. History[edit] In a variant now known as picture consequences, instead of sentences, portions of a person were drawn.[3] Later the game was adapted to drawing and collage, producing a result similar to children's books in which the pages were cut into thirds, the top third pages showing the head of a person or animal, the middle third the torso, and the bottom third the legs, with children having the ability to "mix and match" by turning pages. Modern examples[edit] William S. See also[edit] Notes[edit]

Chavs, sluts and the war of words | Mind your language | Media Like an expedition to the source of the Nile, any attempt to find the origins of a word runs aground when the trail vanishes into a realm without tangible records: oral culture. As Baroness Hussein-Ece – she who was "trapped in a queue in chav-land" – will tell you, Twitter is oral culture but with records. But words have power beyond their mere meaning. They still bear the hallmarks of the Garden of Eden, in which the language spoken by Adam contained the essence of the thing it described, and so controlled it. The meaning of "chav" has been hotly contested (Polly Toynbee's piece received 1,152 comments), being deemed variously to refer to class, financial acuity, behavioural traits, lifestyle, sartorial choices, debt and housing. This is chicken and egg time. Chav seems to have come about severally and spontaneously in response to a need. But what about old words? Old words evolve, too, by stepping out of the dictionary and back into oral culture.

HOW TO WRITE GOOD Caveat emptor. Carpe diem. O si villi, si ergo, fortibus es in ero. Et tu, brute. by Frank L. Visco My several years in the word game have learnt me several rules: Avoid alliteration. English 50 Exercises for Story Writers English 50 – Intro to Creative Writing: Exercises for Story Writers Basic Theory: What is a short story? As soon as someone delivers a definition, some good writer will write a story that proves the theory wrong. About the only thing we can say for sure is that short stories are short and that they are written in what we call prose. Short stories have a narrator; that is, someone tells the story; have at least one character in them; have some action occur (or perhaps fails to occur); take place somewhere; that is, there is a setting for the action; and someone either learns something or fails to learn something (theme).With these five characteristics in mind, we can create an almost endless supply of exercises to help sharpen our techniques of story telling. Narrative Voice Twenty or so years ago, voice was the "rite of passage" into a successful writing career. NOTE: It is quite common for writers in the early stages of their careers to imitate the writers they are reading or admire most.

Law And More: "Am having hard time taking the whole death-of-law thing seriously," Midwest Attorney A Midwest Attorney writes in this Presidents's Day weekend: "In my few lucid moments in between bouts of economic paranoia this weekend - if it were summer, I'd be canning green beans and shooting squirrels to eat next winter - I'm having a hard time taking the whole death-of-law thing seriously. I think you are totally correct, Jane, in saying: 'It could drill down to what studying law, practicing it, and the thought or reality of giving it up, at least as a means of making a living, mean to you.' There have been hard times before and there will be again. Such times always are not a problem but an opportunity. "For example, the decade of the 1970s was the gilded age of antitrust law. "Environmental law followed a similar track. "BigLaw associates may have been lulled - through no fault of their own - to believe their stellar records were a virtual free-pass to the good life. Further commentary welcome on the changing conditions in BigLaw.

Paragraphs and Topic Sentences A paragraph is a series of sentences that are organized and coherent, and are all related to a single topic. Almost every piece of writing you do that is longer than a few sentences should be organized into paragraphs. This is because paragraphs show a reader where the subdivisions of an essay begin and end, and thus help the reader see the organization of the essay and grasp its main points. Paragraphs can contain many different kinds of information. A well-organized paragraph supports or develops a single controlling idea, which is expressed in a sentence called the topic sentence. Although most paragraphs should have a topic sentence, there are a few situations when a paragraph might not need a topic sentence. Most paragraphs in an essay have a three-part structure—introduction, body, and conclusion. Body: follows the introduction; discusses the controlling idea, using facts, arguments, analysis, examples, and other information. Repeat key words or phrases. To show addition: