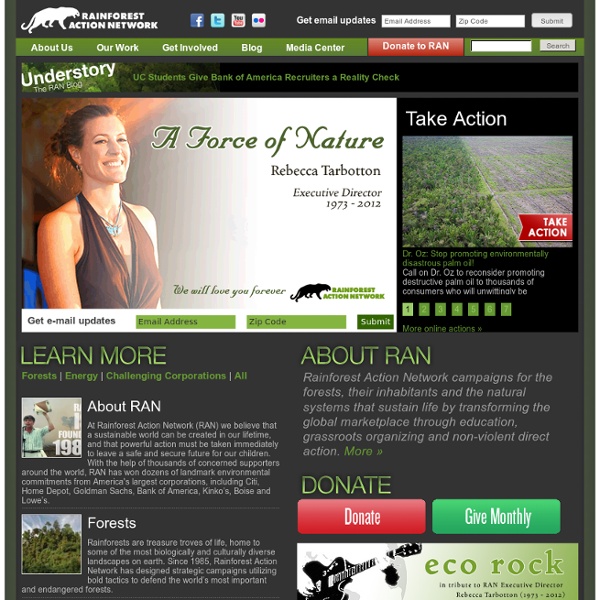 The Ruckus Society : Index meditation cushions hand-made, zafu cushion from zen, seiza benches Bill Moyers: Ending the Silence on Climate Change Ending the Silence on Climate Change from BillMoyers.com on Vimeo. Remember climate change? The issue barely comes up with any substance in our current political dialogue. But bringing climate change back into our national conversation is as much a communications challenge as it is a scientific one. This week, in an encore broadcast, scientist Anthony Leiserowitz, director of the Yale Project on Climate Change Communication, joins Bill to describe his efforts to galvanize communities over what’s arguably the greatest single threat facing humanity. “[A] pervasive sense up to now has been that climate change is distant — distant in time, and distant in space,” Leiserowitz tells Bill. The show also includes a short video portrait of photographic artist Chris Jordan, whose work helps us understand the scope of American consumerism and consumption. © 2013 Public Affairs Television Inc.

Nuclear Information and Resource Service The Official Web Page of the United Farm Workers of America In 1938 he and his family moved to California. He lived in La Colonia Barrio in Oxnard for a short period, returning to Arizona several months later. They returned to California in June 1939 and this time settled in San Jose. They lived in the barrio called Sal Si Puedes -"Get Out If You Can." He did not like school as a child, probably because he spoke only Spanish at home. While his childhood school education was not the best, later in life, education was his passion. He joined the U.S. In 1948 Cesar married Helen Fabela. Cesar returned to San Jose where he met and was influenced by Father Donald McDonnell. Cesar became an organizer for Ross' organization, the Community Service Organization - CSO. For a long time in 1962, there were very few union dues paying members. It was the beginning of La Causa a cause that was supported by organized labor, religious groups, minorities, and students. Cesar Chavez completed his 36-day Fast for Life on August 21, 1988. Cardinal Roger M.

Integrative Body Psychotherapy - IBP The Venus Project Dahr Jamail | As Climate Disruption Advances, 26 Percent of Mammals Face Extinction (Image: Polar bear, air pollution via Shutterstock; Edited: JR/TO) Two recently released studies brought bad news for those living near coastlines around the world. One published in the peer-reviewed Nature Climate Change, the other in the Proceedings of the National Academy of Sciences, the studies showed that existing computer models might have severely underestimated the risk to the Greenland ice sheet from warming global temperatures. Bear in mind that if Greenland's entire ice sheet melts, 20 feet would be added to global sea levels. As if that isn't enough of an indicator of how fast anthropogenic climate disruption (ACD) is happening across the globe, two days after delegates from more than 190 countries had gathered in Peru at the annual climate summit, the World Meteorological Organization reported that 2014 was tied with 2010 as the hottest year on record, and rejected popular claims that global warming had "paused." To see more stories like this, visit "Planet or Profit?" Earth

Institute for Local Self-Reliance (ILSR) - Home Page Rangjung Yeshe Gomde Optimum Population Trust Loggers Accidentally Cut Down World’s Oldest Tree in Amazon Forest World News Daily Report Environment Illegal loggers at the frontier of the Peruvian and Brazilian border have mistakenly cut down what experts claim is the world’s oldest tree after allegedly not noticing they were logging deeply in Matsés Indigenous Reserve, an area where logging is illegal, infuriating local conservation organizations and native indigenous communities. The giant Samauma tree that is thought to be over 5,800 years old judging on its concentric rings and estimated to be close to 40 meters in height was a major part of the native tribes cultural landscape, countless generations of natives having witnessed the long duration of the tree and having included it in their own culture. «It is the Mother spirit of the rainforest, from this spirit-tree came the life force of all things living. Native communities alarmed local media outlets and conservation groups when Aotlcp-Awak, or Mother tree in local dialects, was reported sawed down by heavy machinery