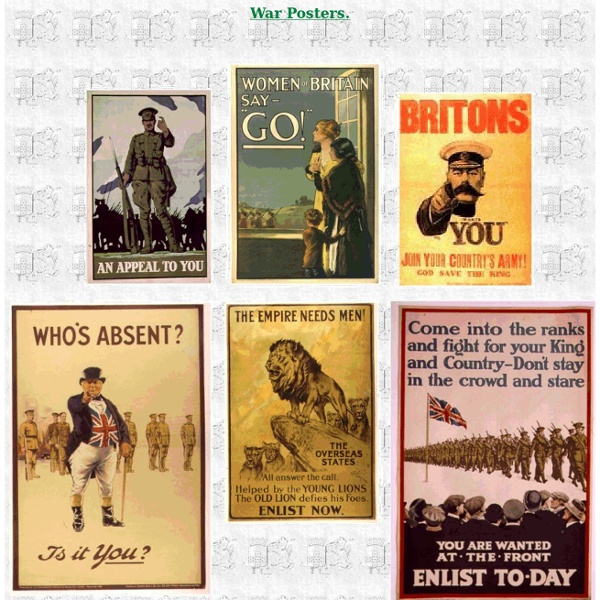 Shellshock By 1914 British doctors working in military hospitals noticed patients suffering from "shell shock". Early symptoms included tiredness, irritability, giddiness, lack of concentration and headaches. Eventually the men suffered mental breakdowns making it impossible for them to remain in the front-line. Some came to the conclusion that the soldiers condition was caused by the enemy's heavy artillery. These doctors argued that a bursting shell creates a vacuum, and when the air rushes into this vacuum it disturbs the cerebro-spinal fluid and this can upset the working of the brain. Some doctors argued that the only cure for shell-shock was a complete rest away from the fighting. Philip Gibbs, a journalist on the Western Front, later recalled: "The shell-shock cases were the worst to see and the worst to cure. Between 1914 and 1918 the British Army identified 80,000 men (2% of those who saw active service) as suffering from shell-shock.

From trench to tomb: The unknown warrior's journey 11 November 2010Last updated at 02:12 By Mario Cacciottolo BBC News The tomb, in London's Westminster Abbey The unknown warrior was carried from a French battlefield 90 years ago, to be laid to rest among kings and statesmen in Westminster Abbey. But how did this symbol of the sacrifice of war come to be chosen? In 1916, a Church of England clergyman serving at the Western Front in World War I spotted an inscription on an anonymous war grave which gave him an idea. That moment of inspiration would blossom into a worldwide ceremony that is still being replicated in the 21st Century - the grave of an unknown warrior, symbolising those who made the ultimate sacrifice for their country. The Reverend David Railton caught sight of the grave in a back garden at Armentieres in France in 1916, with a rough cross upon which was pencilled the words "An Unknown British Soldier". But there was a procedure in choosing a single corpse to represent the many unnamed dead. Continue reading the main story

In the trenches of 1914-1918 What were the trenches? Although most of us think primarily of the Great War in terms of life and death in the trenches, only a relatively small proportion of the army actually served there. The trenches were the front lines, the most dangerous places. But behind them was a mass of supply lines, training establishments, stores, workshops, headquarters and all the other elements of the 1914-1918 system of war, in which the majority of troops were employed. The trenches were the domain of the infantry, with the supporting arms of the mortars and machine-guns, the engineers and the forward positions of the artillery observers. Why were the trenches there? The idea of digging into the ground to give some protection from powerful enemy artillery and small arms fire was not a new idea or unique to the Great War. What were the trenches like? The type and nature of the trench positions varied a lot, depending on the local conditions. The enemy had a very similar system of trenches.

Untold stories Photos, letters and other memorabilia It was the war that tore Europe apart – a struggle between the central powers of Germany, Austria-Hungary, Turkey and Bulgaria, against the allied powers of Britain, France, Belgium, Russia, Italy and the USA. No European nation was left untouched – even neutral states felt the impact of the war. But it was the ordinary men and women who were affected the most. Renowned historian and WW1 author Peter Englund said: “This important and imaginative project tells the other side of the story, from the point of view of a young soldier who signed up seeking adventure, to the family devastated by news that he was one of millions who would never return.

Russia's Great War and Revolution World War 1 –  who started it? Emperor Franz Joseph I of Austria-Hungary When Franz Ferdinand, his nephew and heir, was murdered, Emperor Franz Joseph I decided that military action was required to cut Serbia down to size. But with time lost to investigations and diplomacy, it was not until July 23 that Serbia was presented with a harsh ultimatum. Its demands included the denunciation of separatist activities, the banning of publications and organisations hostile to Austria- Hungary and co-operation with Habsburg officials in suppressing subversion and a judicial inquiry. Serbia’s measured reply was to agree to almost all demands. Why did the 83-year-old Emperor Franz Joseph and his Vienna government take such a hard line? More than two-fifths of Bosnia’s population was ethnic Serb, many of whom yearned for independence and union with a Greater Serbia. An even more powerful reason was because many in the Austrian government and military felt the time was opportune. Kaiser Wilhelm II of Germany So, who was to blame?

Build your First World War school programme - Education - Auckland War Memorial Museum One Hundred years on from the First World War: 2014 – 2018 We provide a wide range of educational opportunities to help engage students with the events of the First World War. These include onsite educator led programmes, onsite independent programmes and gallery links, competitions and more. Education programmes (educator led) Years 1 - 8 Examine the events and experiences of the First World War with our educator-led programmes for primary and intermediate students. Years 9 - 13 Select from our secondary school programmes to explore the roles New Zealanders played in the First World War, and the affect the conflict had on the lives and identity of individuals, communities and our nation. Teacher professional development The Auckland War Memorial Museum offers a range of learning opportunities for primary and secondary teachers, support staff, and principals. Teacher professional development: The First World War Self-guided experiences You might like to lead your own Museum visit. Fast Facts

World War I Centenary: 100 Legacies of the Great War World War I changed everything. From new countries to literature, from tanks to treaties and from flamethrowers to fashion, the conflict is still writ large on our lives 100 years on. It gave birth to violent dictators and their ideologies but extended the electoral franchise to millions. It ushered in the era of mechanised warfare whilst laying the foundations for modern medicine. After millions of men gave their lives on the battlefields of Europe, it was doubly tragic that a deadly influenza would claim up to 50 million more deaths in the conflict’s immediate aftermath. Wall Street Journal editors from around the world have selected 100 legacies that still shape our lives today. Writers Editors Tom Mudd, Laurence Eyton, Sheila Courter, Margaret de Streel, Matthew Walls, Adrian Kerr, Peter Stiff, Perry Cleveland-Peck, Sofia McFarland, Tina Fuhr, Lydia Serota, Ese Erheriene, Jon Sindreu, Yvonne Dennis, John Crowley Multimedia Producers Designers & Developers Consultant