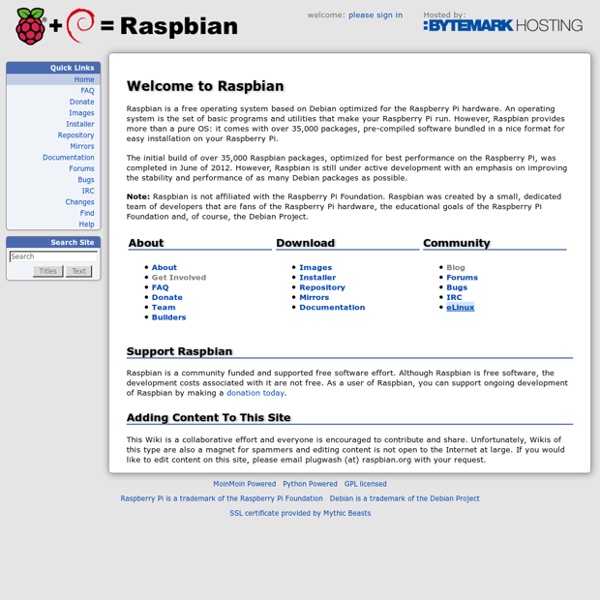 Pibot RPi Hub Notice: The Raspberry Pi Wiki pages on this site is collaborative work - the Raspberry Pi Foundation is not responsible for content on these pages. Now shipping to customers See the Buying Guide on how to order one, or visit the Raspberry Pi Foundation Home Page About The Raspberry Pi production board (model B Rev 2.0) 3D CAD Model of the Raspberry Pi 3 Model B (Download) The Raspberry Pi (short: RPi or RasPi) is an ultra-low-cost ($20-$35) credit-card sized Linux computer which was conceived with the primary goal of teaching computer programming to children. Raspberry Pi is manufactured and sold in partnership with the worldwide industrial distributors Premier Farnell/Element 14 and RS Components, and the Chinese distributor Egoman Technology Corp[1]. You can get the latest news from the Foundation Home Page, the Twitter Feed or in the forums. Products are RoHS, CE, FCC, CTick, CSA and WEEE compliant[2]. History Getting Started Resources Books Education Material Community About the RPi Wiki

Raspberry Pi Part 1 - WiFi Support | eLIBtronic.ca I got my Raspberry Pi! Now what?! The backlog has cleared, bulk orders are now being accepted, and for about 35$ + shipping us Canadians can now get their hands on a Raspberry Pi (RPi). What exactly is RPi? The short answer is a low cost Linux device that promises to be very hackable, very accessible and very much aimed at getting kids interested in computers and programming. I got mine two weeks ago now and I'm finally kicking the tires. I'll skip the intro part about how to load up an Operating System on an SD card. Since the dongle needs lots of juice to run I had to plug it into a powered USB router to run. lsusb showed that the device is there and recognized: I wanted to use a graphical network manager so I installed WICD. sudo apt-get install wicd Now under the Internet menu there was an icon for WICD. I tethered to my phone and used WPA2-PSK authentication. After what felt like forever the RPi connected and grabbed an IP. Up next for me and RPi...

Arduino vs Raspberry Pi: Which Is The Mini Computer For You? You’re looking for a small computer to power a laser turret that can shoot multi-coloured balloons – it’s a common situation we all find ourselves in at one point or another – and you’ve heard good things about both Arduino and Raspberry Pi. But you can’t decide – which the best mini-computer for your project? Which is going to prevail as the most useful once you’ve disassembled the turret thanks to that incident with the neighbour’s cat? Which could you play movies on? Don’t worry, James is here to explain all! What’s The Difference? The Arduino and Raspberry Pi may look quite similar – they’re both cute little circuit boards with some chips and pins on them – but they are in fact very different devices. Although the Arduino can be programmed with small C-like applications, it cannot run a full scale “operating system” and certainly won’t be replacing your media center anytime soon. Strengths & Weaknesses So is the Arduino useless then? None So, you’re decided? WAIT!