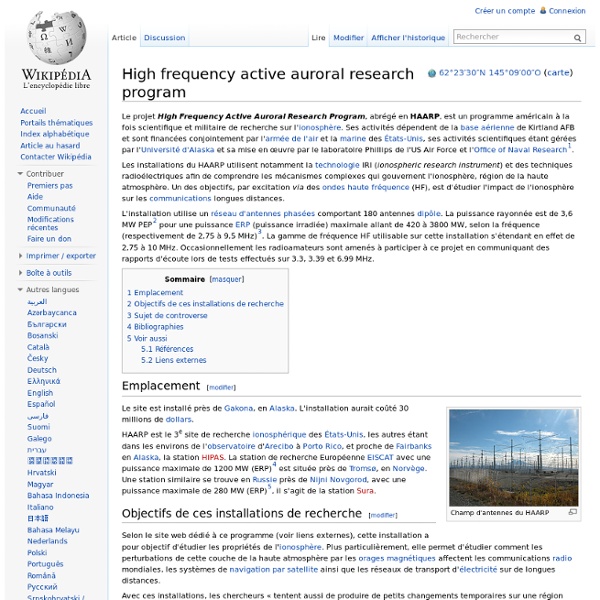 New study links over 7,000 cancer deaths to cell phone tower radiation exposures (NaturalNews) Could exposure to radiation from cell phone towers really responsible for over 7,000 cancer deaths? According to research findings from Brazil, the facts speak for themselves. The study established a direct link between cancer deaths in Belo Horizonte, Brazil's third largest city, with the cell phone network.Over 80 percent of those who succumbed to certain types of cancer resided approximately a third of a mile away from one of the hundreds of cell phone antennae that populate the city.

High Frequency Active Auroral Research Program The most prominent instrument at the HAARP Station is the Ionospheric Research Instrument (IRI), a high-power radio frequency transmitter facility operating in the high frequency (HF) band. The IRI is used to temporarily excite a limited area of the Ionosphere. Other instruments, such as a VHF and a UHF radar, a fluxgate magnetometer, a digisonde (an ionospheric sounding device), and an induction magnetometer, are used to study the physical processes that occur in the excited region.

CHEMTRAIL SYMPOSION - 29/05/2010 on USTREAM: International Symposion The illegal spraying of harmful substances in the atmosphere by airplanes, also known Watch without ads Ustream © Search Log in / Sign up With Facebook (faster) Majestic shuttle in unique station image By Jonathan Amos Science correspondent, BBC News It is a stunning image and one that is bound to be reproduced over and over again whenever they recall the history of the US space shuttle. The picture was taken by Italian astronaut Paolo Nespoli as he left the International Space Station in May in a Soyuz capsule to return to Earth. Safety procedures mean the Russian vehicle would never normally be in transit when a shuttle is present. It makes this the first-ever image of an American orbiter docked to the ISS. That statement is certainly true of stills taken in close proximity to the outpost.

The HAARP Induction Magnetometer About the Instrument The induction magnetometer detects temporal variation of the geomagnetic field based on Faraday's law of magnetic induction. This instrument, which was provided by the University of Tokyo, is composed of three individual sensors. Each sensor is comprised of a large number of turns of fine copper wire wound around a rod with high magnetic permeability. Are We in a HAARP "Earthquake War"? Even More interesting than the lights that have appeared over the Japanese and Chili earthquakes (sorry no images yet) is the apparent strategic locations of these quakes. An unconfirmed report states that the Russians also know about this "earthquake weapon" "According to an unconfirmed report by the Russian Northern Fleets, the tragic earthquake in Haiti was caused by a US navy earthquake weapon that went "horribly wrong," reports Press TV. The weapons test was originally supposed to be used against Iran but caused the cataclysmic earthquake in the Caribbean country. The purpose of the earthquake weapon being used against Iran, according to the Russian report, was to topple the current Islamic system in the country. Vive TV reports that the unconfirmed Russian report also suggests that the US instigated the 6.5 magnitude earthquake in the Pacific Ocean earlier this month.

Encyclopedia of safety As promised, we continue the theme of the issue before 2012 and publish a new article on weapons Doomsday (doomsday machine), which no doubt has played and will play a major role in the script the man-made apocalypse, which is scheduled for the next few years, perhaps in 2012 . We have already mentioned that no doubt in his nature and man-made, article after article, we will tell you why, over all of this are people of flesh and blood, but not any X planets, aliens and the like. In this article we would like to highlight the most important element of these plans — the most powerful weapon ever created by man. You probably already guessed, we are talking about, or HAARP (High Frequency Active Auroral Research Program), followed by a moment of his arrival plume stretches suspicions, conjectures and speculations. Which, alas, are becoming more and more evidence.

UN ORDERED DEPOPULATION OF 3 BILLION PEOPLE BY food malnutrition HAS STARTED The WHO and UN are undertaking a covert and sinister plan to kill off as many as 3 billion people by food malnutrition. The organization that is responsible for preparing for the murder of 3 billion people is called the Codex Alimentarius Commission. It was established in 1963 by the World Health Organization(WHO) and the Food and Agriculture Organization of the United Nations (UN). Their officially stated purpose is to develop international food standards to protect consumer health and to facilitate fair trading practices in foods. Today, there are 181 member governments including Canada. The real purpose of this WHO / UN Codex Alimentarius Commission is to murder 3 billion people.