FreemanTV ~ Where the esoteric meets the political. 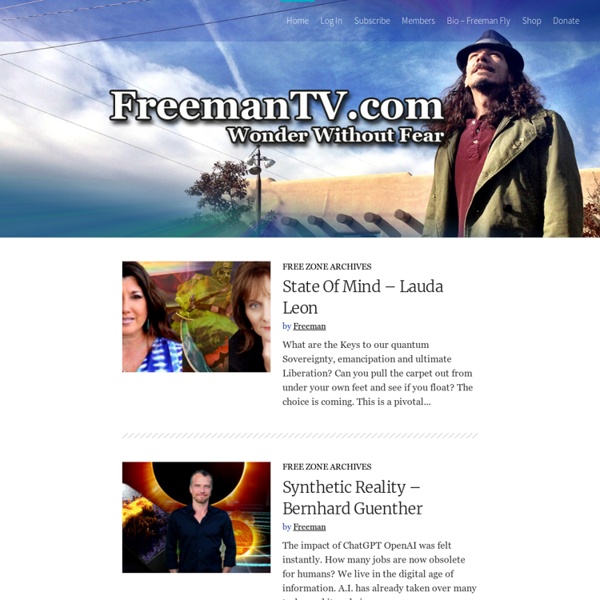 tolfa Realm Dynamics - Matrix Version 0.2 :: June 30th 2005 :: montalk@montalk.net :: Download PDF [The principles of Realm Dynamics were inspired by the Cassiopaeans, expanded by the Nexus Seven, refined through numerous discussions with friends, and confirmed by experience.] Introduction An ancient hermetic axiom states that everything is mind, everything vibrates. Since each living thing is uniquely conscious, each living thing carries a unique vibratory signature. This is the study of realm dynamics, how vibrations influence experience, and how experience influences vibration. Vibration When we speak of vibration, we are really talking about waves with amplitude, frequency, and phase. Soul vibrations are no less tangible than sound waves, though their nature and medium of propagation are more exotic. Realm dynamics is essentially about quantum physics, or at least how quantum principles allow consciousness to interface with physical reality. The Fractal Hologram The holographic process has metaphysical parallels.

Voluntaryist.com Welcome to the Frontpage Nullify NSA! |Nullify NSA! Dreamhill Research In the early 1980's I was honored to have as a dear friend and work with the late Dr. Marcel Vogel who founded Psychic Research Inc. Although my background is in traditionally taught electronics and communications, I have always felt that the laws that govern these sciences have a profound basis that goes far beyond that which scientists can presently measure. An experience in my life that triggered my interest in sacred geometry is what lead me into seeking out the one person on the planet that was scientifically linking consciousness with geometrical forms as exemplified in crystals, Dr. Marcel Vogel. In 1983 he asked me to join him as a research associate. Few basic fundamentals about the energies of Mind from the Research Marcel had a genius of an inquisitive mind, that once he discovered for himself that the energies of mind could effect matter, he then went into serious scientific research. Marcel Joseph Vogel You may read more about the life of Marcel from this PDF Document. The Gift

Forbidden Bookshelf | Open Road Integrated Media The gripping account of an assassination on US soil and the violent foreign conspiracy that stretched from Pinochet’s Chile to the streets of Washington, DC, with a new introduction by Ariel Dorfman On September 10, 1976, exiled Chilean leader Orlando Letelier delivered a blistering rebuke of Augusto Pinochet’s brutal right-wing regime in a speech at Madison Square Garden. Eleven days later, while Letelier was on Embassy Row... in Washington, DC, a bomb affixed to the bottom of his car exploded, killing him and his coworker Ronni Moffitt. This gripping account tells the story not only of a political plot that ended in murder, but also of the FBI’s inquiry into the affair. [ Ebook Details ]