The Windows Store is open 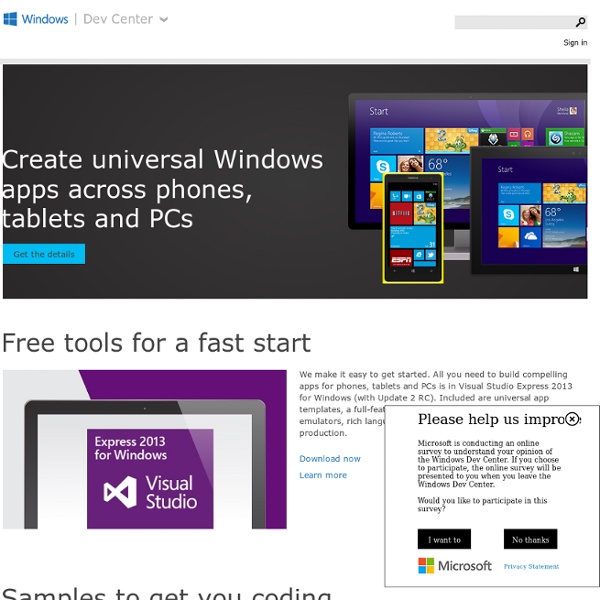 We make it easy to get started. All you need to build compelling apps for phones, tablets and PCs is in Visual Studio Express 2013 for Windows (with Update 2 RC). Included are universal app templates, a full-featured code editor, a powerful debugger, emulators, rich language support, and more, all ready to use in production. We have dozens of code samples to get you up and running fast. We’ll help you get your Windows Store app ready for a successful launch through one of our worldwide community events or by connecting you with a Windows platform expert.

Laws Of Subtraction Matthew May Human Connectome Project, Science, March 2012. Dr. Jeffrey Schwartz has developed a successful behavioral treatment for people with OCD based on neuroplasticity — that you can change the wiring of your brain by altering the way you think. Relabeling: Changing how you identify certain thoughts. Reattribute: Understand why you're engaging in a certain behavior, so you can change it. Refocus: Systematically engage in a different behavior. Revalue: See the old patterns as distractions, rather than compulsions. Source: The Laws Of Subtraction

Evolving the Start menu - Building Windows 8 This post kicks off a series of posts on the design of the Start screen and the evolution of the core activity of launching and switching programs. Some folks are calling the Start screen the "Metro shell" for Windows 8, but for us it is the evolution of the Start menu and associated functions. We've been watching the comments closely and have seen the full spectrum of reactions as one would expect when the core interface changes. We want to use these blog posts to have a dialog that reflects back on your comments, and so we’ll start by walking you through the history and decisions that led to the current design. We’d like to share a series of blog posts on the how and why of reimagining Start. We recognize that to some people, any change to Windows is going to be disruptive, and so we want to make sure we continue an open dialog about those changes. With regard to the main user experience, particularly Start, we’re noticing some themes in your comments. A brief history of Start

Robert Greene Mastery Daniel Everett, a gifted linguist, was failing to learn the language of the Paraha tribe in the Amazon, which stumped researchers for years. He failed because he approached it as a linguist and Christian missionary, from a position of superiority. He didn't master the language until he learned it like one of the Paraha's children, dependent on the tribe, and subject to the same restraints, inferiority, and need for support that they were. Entering a new place or path you need to learn as much as possible as quickly as possible. Lingering prejudices and feelings of superiority hamper that. Source: Robert Greene's "Mastery"

Designing the Start screen - Building Windows 8 Thank you for the comments and feedback on the previous post. We definitely get the message that there's a lot of feedback and passion around the design. We're going to continue talking about the design and answering your questions and comments through these blog posts. We designed Start to be a modern, fast and fluid replacement for the combination of launching, switching, notifying, and at-a-glance viewing of information. That's a tall order. As we wrote about in our post on evolving the Start menu, after studying real world usage of the Start menu through a variety of techniques, we realized that it was serving mainly as the launcher for programs you rarely use. So, as evidence mounts that the menu hasn’t kept up with the modern way in which we use our PCs today, we've seen a growing interest in replacements for the Start menu (whether for touch, or mouse and keyboard). In light of these realizations, we stepped back and reimagined the role of Start in Windows 8. Alive with activity

Best Android apps for pet lovers There’s no denying that no (wo)man is an island. But, sometimes we don’t want another human being to keep us company. That’s why there’s the saying, a dog is a (wo)man’s best friend. You don’t have to have a dog, of course. There’s a whole score of other pet companions you could have with you. Some prefer cats, others birds, another group of pet lovers prefer rodents. A number of apps geared towards pets and pet lovers have cropped up in the Google Play Store, so we’ve put together some of the must-haves for pet owners. Rate My Pets If you’ve got a pet and you want to show it off to the whole world, download Rate My Pets for your Android device today. Be creative and dress up your pets to make them extra cute and get more votes. You don’t have to be a pet owner to enjoy just how adorable these little critters are, but we highly suspect you’ll be longing for a cat, dog, or bird of your own once you’re done rating pet pictures. Dog Breeds Fido Pet Adoptions Animal Translator Pet Master Free

Breathe New Life into Your Old PC — with Windows 7 Linux has long been the preferred operating system for rejuvenating older PCs for three reasons: It's lighter weight than Windows, it's secure enough to let you sidestep CPU-hogging anti-virus programs, and it's free. Windows 7 may shake up that thinking, being the first version of Windows that, judging from widespread reviews from beta testers, runs faster than the prior one. While the minimum specs Microsoft outlined for Vista were lower than Windows 7's (see breakout box), Vista was so bloated that it ran poorly on many PCs. Think of Windows 7 as Vista after an extended stay at the weight-loss spa -- trim, buffed and Botoxed. Even netbooks can run it. In the past it usually made little economic sense to reinstall Windows on an older PC, as buying a new retail copy of Windows would often cost more than the PC was worth. Also, Windows 7 continues Microsoft's legendary backward compatibility for applications. But just how low can you go with Windows 7? Would you recommend Windows 7?

Off-shore company registration - Registracija off-shore kompanija i otvaranje bankovnih racuna Laptop Refresh: Six Ways to Revitalize an Older Notebook Do you have an aging laptop that you want to save from the recycling center? With a few software and hardware upgrades, you could bring that old notebook back to life and possibly avoid having to plunk down cash for a new laptop or a secondary device such as an Apple iPad or an Android tablet. Refresh the Operating System: Three Options Back up first! Before making any operating system changes, be sure to back up your data to an external hard drive (or two), and confirm that you have all of your application discs handy so that you can reinstall them. 1. Unfortunately, reinstalling Windows from your laptop manufacturer's restore disc or program will also reinstall any bloatware that initially came with it. 2. At Microsoft's suggested retail price of $120 for the OS upgrade, this option isn't cheap. Want to upgrade? 3. Easy Hardware Upgrades: Three Options 1. 2. For about $50, you can buy a 5400-rpm hard drive with 320GB of storage space, or a 7200-rpm drive with 320GB of storage. 3.

USB Code 43 Error I suggest you reload the USB controller drivers.1. Click "Start", type in Device Manager the Search bar and press "Enter". Click Continue if necessary. 2. I tried to follow your procedure as outline above--but the only "Host Controller" that I could find was "Intel(R) 5 Series/3400 Series Chipset Family USB Enhanced Host Controller - 3B34 (and) 3B3C" --When I uninstalled the 3B34 my mouse stopped working so I quit. The problem that I am having is---I purchased a "External Enclossure for a Hard disk" I installed a 80 Gb HHD into the enclosure that I had from an old pc. So my question is---before I install the NEW front panel with USB ports should I some how uninstall the drivers for the OLD panel and how to I do that.

error code 43 when USB not recognised Found this helpful 1 Have you run the troubleshooter? Click Start > type Troubleshooting > Configure a device under Hardware and Sound. Code 43 Windows has stopped this device because it has reported problems. One of the drivers controlling the device notified the operating system that the device failed in some manner. If you have already run the Troubleshooting Wizard, you might want to check the hardware documentation for more information about diagnosing the problem. Cheers! 'Tis all a chequer board of nights and days, Where destiny with men for pieces plays; Hither and thither, and mates, and slays. In a world without walls and fences, who needs Windows and Gates?! Found this helpful 0 thanks for the advice. I tried and had no luck. I also am running into this problem on a laptop. Hello, If you're seeing a code 43 for one of your USB devices or a USB controller/root hub, some additional information is needed to diagnose this issue. 6) Search on the machine for “USBForumTrace.etl” Thanks, Mark