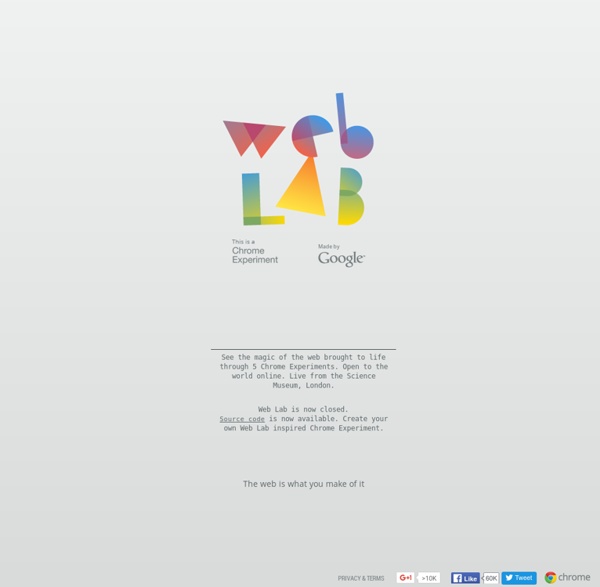 See the magic of the web brought to life through 5 Chrome Experiments. Open to the world online. Live from the Science Museum, London. Web Lab is now closed.Source code is now available. Create your own Web Lab inspired Chrome Experiment. Loading is taking longer than expected. Aw, snap!

An Overview of the Euro Crisis - Interactive Graphic Arrows show imbalances of debt exposure between borrowers in one country and banks in another; arrows point from debtors to their bank creditors. Arrow widths are proportional to the balance of money owed. For example, French borrowers owe Italian banks $50.6 billion; Italian borrowers owe French banks $416.4 billion.

James Bridle – Waving at the Machines James Bridle’s closing keynote from Web Directions South 2011 was a a terrific end to an amazing couple of days, but don’t despair if you weren’t there. You can watch a full length video, or even read a transcript with the bonus of all the links James refers to. And if you want to be there next time around, make sure you are one of the first to hear about Web Directions South 2013! Transcript

Explorable Explanations Bret Victor / March 10, 2011 What does it mean to be an active reader? An active reader asks questions, considers alternatives, questions assumptions, and even questions the trustworthiness of the author. An active reader tries to generalize specific examples, and devise specific examples for generalities. Claire L. Evans: Greetings from the Children of Planet Earth  In 1977, NASA sent a pair of unmanned probes named Voyager 1 and Voyager 2 into space. Among the infrared spectrometers and radio receivers included on each probe were identical copies of the same non-scientific object: the Voyager Golden Record. Sheathed in a protective aluminum jacket, the Record is a 12-inch gold-plated copper disk containing sounds and images chosen to portray the diversity of life on Earth: bird calls, whale songs, the sounds of surf, wind, and thunder, music from human cultures, and some 55 greetings in a range of languages, alive and dead. Like lonely time capsules, the records, aboard their still-functioning hosts, have long since left our solar system. The official Voyager 2 Twitter reports that the probe is currently at 13 hrs 38 mins 08 secs of light-travel time from Earth, which makes it the farthest man-made object from Earth. And neither, of course, are we.

OUYA: A New Kind of Video Game Console by OUYA We just added game streaming through OnLive! Final Fantasy will be on OUYA...and we have an exclusive game! And VEVO has agreed to put their music videos on OUYA, XBMC adds a streaming media app, with TuneIn and iHeartRadio adding music! We're honored by all of you who are backing us -- THANK YOU. We are focused on delivering for you, first come first served. The Sexperience 1000 - Sexperience Welcome to The Sexperience 1000, an interactive journey through the sexual experiences and preferences of one thousand British individuals. What’s the favourite sexual position of iPhone users in the North? Do country music lovers over 55 prefer to do it in the dark? Explore the 20 questions of our survey and discover what the great British public get up to between the sheets… Filter

The Curious Brain What a wonderful Festival it has been! It was better and even more impressive than the one last year. Basically it was huge. So many presentation to see, so many people to connect. At one point you had to sacrifice which presentation to see over another one. I met so many awesome people B. 15-Year-Old Maker Astronomically Improves Pancreatic Cancer Test Maryland young maker Jack Andraka isn’t old enough to drive yet, but he’s just pioneered a new, improved test for diagnosing pancreatic cancer that is 90% accurate, 400 times more sensitive, and 26,000 times less expensive than existing methods. Andraka had gotten interested in pancreatic cancer, and knew that early detection is a challenge. He gleaned information on the topic from his “good friend Google,” and began his research. Yes, he even got in trouble in his science class for reading articles on carbon nanotubes instead of doing his classwork.

Lostalgic Lostalgic This project is based on the entire ABC's LOST TV show scripts, 115 episodes in 7 seasons, that I managed to parse from Lostpedia. I also parsed this page with additional information about hidden characters relations. My aim for this project is not (only) to visualize some properties and patterns out of the script but actually to allow to read and enjoy the series in a different way. I plan to add new views (will inform through twitter), more aimed to reveal global patterns in the script, and I will include cliffhangers and writing teams information.