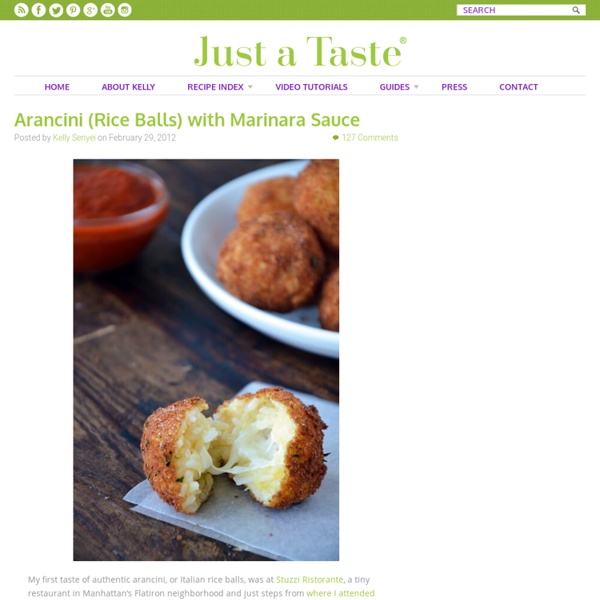 My first taste of authentic arancini, or Italian rice balls, was at Stuzzi Ristorante, a tiny restaurant in Manhattan’s Flatiron neighborhood and just steps from where I attended culinary school. Back then, we knew the local hotspot as Bar Stuzzi, and it was a favorite for Italian small plates paired with towering glasses of crisp Prosecco. I’ll never forget my first taste of arancini, as my eyes went wide at the sight of the baseball-sized rice balls coated in breadcrumbs, deep-fried and served atop a bed of bright red marinara. They were a total triple threat: crunchy, creamy and cheesy. If fried rice isn’t your thing, then arancini are the ultimate excuse for using up what’s left of the ol’ Uncle Ben’s in the fridge. Related:  comida • To Try Soon

Homemade Baked Mozzarella Sticks Mozzarella sticks are a delicious treat, probably one of the most popular appetizers at restaurants, and a fun party food. They tend to be rather fattening, especially considering they are usually fried, but they are so irresistibly tasty. So how do you give in to the temptation that is mozzarella sticks without the guilt? Make healthy, Baked Mozzarella Sticks! Ingredients 1 pkg. low fat mozzarella cheese strings (8-10 sticks) 1/2 cup flour 2 large egg whites, lightly beaten 1 cup dry bread crumbs or Italian style panko (seasoned) marinara sauce for dipping Directions 1. I hope you enjoy this delicious, healthy twist on traditional fried mozzarella sticks. Note: Some comments indicate that mozzarella is oozing sooner than time prescribed in this recipe- keep an eye on the sticks while baking and feel free to shorten the bake time to suit your oven. You May Also Like:

Skinny Orange Chicken Recipe Skinny Orange Chicken This "skinny" orange chicken recipe is made with a heavenly orange chicken sauce, but without all of the calories of traditional Chinese orange chicken. Everyone will love it! Happy New Year’s, everyone! I hope that your 2014 is off to a terrific start. And hopefully, a delicious and healthy start! So for all of you new years resolution folks who are out there scanning the world wide webosphere looking for lighter recipes after a holiday season full of sweets, you’ve come to the right place. This version packs all of the amazing sweet and savory orange flavor of the restaurant-style version, but with only a fraction of the calories and fat. Interested? Read on for the simple how-to with a photo tutorial. (Before we get to the recipe, I also wanted to invite you to participate in our New Year’s Instagram giveaway. The main key to lightening up this restaurant classic is that we simply saute the chicken instead of fry it. Chicken + Sauce. Ingredients: ! Directions: ! !

Easy Dinner Recipe: Slow-Cooker Black Bean Enchiladas Slow Cooker Enchiladas Serves 4-6 1/2 yellow onion, diced small1/2 bell pepper, diced small (any color)1 16-ounce can black beans, drained and rinsed1 cup frozen corn2 teaspoons chili powder1 teaspoon cumin1 teaspoon salt1 1/2 cups cheese, shredded and divided - we like monterey jack2 16-ounce jars of your favorite salsa12 6"-8" tortillas, flour or cornOptional: 1 cup leftover meat - chicken, pork, hamburger, or shredded beef In a medium bowl, mix together the onion, pepper, black beans, corn, spices, meat (if using), and just 1/2 cup of the cheese. Scoop about 1/3 cup into one of the tortillas, roll it up, and nestle it into the bottom of the crock pot. Continue with the remaining filling and tortillas to create a second layer. Serve the enchiladas with the remaining salsa. Additional Notes: • You can cook the enchiladas for longer (6-8 hours on LOW), but we found that the tortillas in the middle start to get mushy while the ones touching the sides of the cooker get crispy.

Chicken Tostadas Recipe Directions To make the tortillas: Pour the oil for frying into a large heavy-bottomed pot to a depth of about 2 inches. Place over medium heat and heat to 375 degrees F. Add the tortillas, one at a time, and fry until golden brown and crispy, about 1 1/2 minutes. To make the chicken: In a small bowl, mix together the chicken, lime juice, oil, coriander, and salt and season with pepper to taste. To assemble the tostadas: Preheat the broiler. Evenly mound the chicken on each tortilla and top with the lettuce. Cook's Note: The tortillas must be fried until very crispy, otherwise they may become rubbery, making them difficult to cut with a knife and fork. Heat the oil in a large skillet over medium-high heat. In a small bowl, mix together the tomatoes, onion, jalapeno, coriander, salt, and season with pepper to taste. Copyright 2001 Television Food Network, G.P. From Food Network Kitchens

The Best Broccoli of Your Life You know you’ve done something right with broccoli when the person you made it for describes it to someone else the next day as “better than biting into a steak.” Those were Craig’s words and they were a marked change from the first words he uttered about the broccoli, before he bit in: “You made broccoli for dinner? Broccoli and sweet potatoes?” Then he did bite in and his eyes lit up. So what did I do to the broccoli to make it taste so good? I can’t take any credit. I’m going to have a hard time this week not posting all of the recipes from her new book, Back To Basics. Specifically, she loves roasting vegetables at a high temperature until they caramelize. Normally, broccoli gets squishy when you cook it. Seriously, this recipe is so easy I can recite it without looking at the book. You preheat the oven to 425. Take 4 to 5 pounds of broccoli (I just got two large bunches), cut into florets (but relatively big ones.) Now, it’s easy. Related Posts: Roasted Shrimp and Broccoli Save Save

Carne Asada Fries Drool. That’s basically what my boyfriend did when I surprised him with these Carne Asada Fries for lunch this past weekend. In fact, I can’t just say that was only him, I was pretty much freaking out the entire time I was making these and just pacing my kitchen while the fries baked because I was so excited to dig in. Just imagine, crispy steak fries, topped with layers of cheese, chopped Carne Asada, fresh homemade guacamole, and pico de gallo. I mean how can you not get excited about that? It’s pretty much my dream lunch. I had some leftover carne asada from a dinner party from the previous night and decided it would make a great topping for some loaded nachos. It got a big thumbs up from my boyfriend, the token carnivore in our house, and I’ve been dreaming about this dish ever since. Ingredients For the Carne Asada: 2 lb flank steak4 garlic cloves, minced1 jalapeno, minced1 cup cilantro, finely chopped2 limes, juiced1 orange, juiced1/2 cup olive oilSalt and pepper Instructions

Pad Thai Noodles - With Step-by-Step Pictures Pad Thai is certainly among the most popular Thai dishes and it’s always been a favorite of mine. However, making this dish is actually a lot harder than it seems. As part of our new business venture, my husband and I have been making different versions of Pad Thai for the last few weeks. After much testing, tweaking, and of course eating, I think we came up with a pretty good take on this classic Thai stir-fry (he’s been to Thailand several times and agrees). In my opinion, the key to making great Pad Thai is to prep all your ingredients and lay them out nicely before beginning to cook, a.k.a. mis en place. If you don’t feel like locating all of the necessary ingredients or if you’re looking for a nice gift idea, try out our Pad Thai recipe kit. Soak the rice noodles and slice tofu and veggies, set aside. Heat a large pan or wok on high heat with oil and stir in tofu and garlic. Add the noodles, then stir in sauce. Mix everything together until well incorporated. Pad Thai Noodles Recipe

SCORE!! The Best Pizza Dough EVER!! | Bite This Erik is obsessed with pizza- obsessed. Actually he’s been on the hunt for ‘proper’ pizza forever. Jersey man at heart…the man needs to be fed good pizza. Period. One of the reasons we got the Big Green Egg is to make pizzas. So we had the gear. Luckily, at the same time I had become really interested in baking bread, knowing that the Egg works like a hearth oven. Sorry…this is a story that continues…a little long, but really exciting. So…reading Peter Reinharts stuff, I then discovered he is obsessed with pizza, like Erik. I figured if this guy knows bread, he’ll know pizza dough. Enough of my rambling…this is the best pizza dough EVER. We also doctored his tomato sauce recipe a bit and found our staple red sauce for the pizzas. Alright, here it is… We use Italian -00- flour, to make an authentic Napoletana dough but you can certainly use regular flour. SCORE!! Ingredients Instructions You can mix this by hand with a big spoon or in an electric mixer using the paddle (not the dough hook).

Peanut Butter Chocolate Cupcakes with Peanut Butter Frosting Even before we tasted these cupcakes, we'd already consumed a fair number of baked goods. There was the espresso chip scone. The Nutella sandwich cookie. The donut muffin. The 'smores cookies. Oh and the dark chocolate covered honeycomb candy. What could possibly possess one to consume all those treats while peanut butter cupcakes were cooling at home? Mummy's in town of course! And might we add, all of these treats were consumed while walking. (We might also add that they were consumed while walking to a Whole Foods in order to purchase green juice. Really, if we're being honest, we could have used more, um, fuel. All we can say is thank GOODNESS these cupcakes were waiting for us when we got home, positively famished of course (because of the walking and the shopping and the hauling of juices). We needed fuel. Yup. Peanut Butter Chocolate Cupcakes with Peanut Butter FrostingMakes 12 cupcakesAdapted from Sprinkles Print Recipe Preheat oven to 350 degrees.