Portraits with a soul 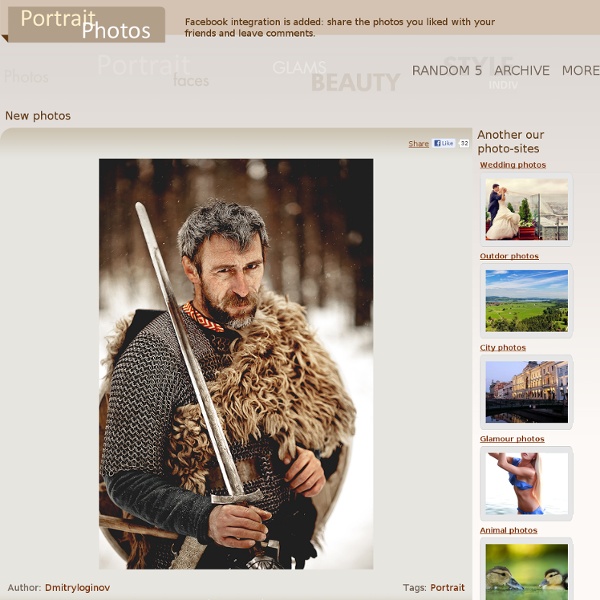 Guide to Human Types part 3 by `majnouna on deviantART PhotoForum Photoshop Contests and Photoshop Tutorials - photoshoptalent.com Guide to Human Types part 2 by `majnouna on deviantART DPChallenge Guide to Human Types part 1 by `majnouna on deviantART Haunting Black and White Portraits of Homeless People by Lee Jeffries Photo series “Homeless” by Lee Jeffries will make you face the ones you neglectfully pass by everyday. Taken exclusively in black and white, each of these close-up portraits is incredibly detailed and capture life stories of homeless people on the streets of Europe and the US. You can get lost in the intense gazes, maps of wrinkles and scars, and all the emotional stories behind them. Accountant by profession, a self-taught photographer from Manchester started his career in photography as a sports photographer, but changed his approach after one incident in London.. Lee typically tries to befriend his models first, and then gives them some money after taking the pictures. Website: leejeffries.550px.com, LJ.

Portraits of the Homeless Photographed in a Studio Environment “Down and Out in the South” is a series of studio portraits by photographer Jan Banning that explore the issue of homelessness. The project started back in 2010 while Banning was working as an artist-in-residence. A board member of the art center suggested homelessness as a potential subject matter for Banning to explore. The photographer was initially hesitant, feeling like he “had little to contribute to existing images” due to the fact that “society’s outcasts have been photographed very often.” However, after thinking about it some more, Banning decided to tackle the project—albeit in an angle different from most photographers. Banning deliberately tried to avoid many of the clichés of photo projects involving homelessness. “I want to show who they are rather than what they are labeled,” he says. The portraits show men and women Banning encountered in South Carolina, Georgia, and Mississippi between 2010 and 2011: “Down and Out in the South” by Jan Banning (via Slate) P.S.

The First Miss Universe Pageant, 1952 Beauty pageants are a bit of a guilty pleasure of mine. We all know they’re silly and superficial but does anyone else here count Drop Dead Gorgeous as one of their favourite comedies from the 90s? What I like about this photo series that I pulled out of the trusty LIFE archives, is the behind-the-scenes element that photographer George Silk has managed to capture. Amusing sideways glares exchanged between the girls, awkward moments and competitive streaks shining through, this photo story has plenty of it… We’re at the first ever Miss Universe and Miss USA pageant– not to be confused with Miss America, Miss United States, Miss United States International, or Miss Earth United States (because that doesn’t make things confusing at all). In 1952 both pageants were held concurrently for the first time in Long Beach, California, which will explain why Miss Japan standing in between Miss Montana and Miss Colorado… And the winner is …. drumroll please… Miss Finland, Armi Helena Kuusela.

Character Designs - An Artist's Resource This Is What The Top Athletes Look Like Without Their Clothes - Dose - Your Daily Dose of Amazing Posted Jul 09, by Jose Duarte It's that time of year again. ESPN came out with its Body Issue and it's getting me motivated to get back into the gym. (Want to play a game as you go? Share on Facebook Share on Twitter Ali Kreiger - US Women's National Team That's a totally normal way to hold a soccer ball right? Sadly, she probably got paid more for this photoshoot than she does for playing soccer. Aly Raisman - Olympic Gymnast I wonder how many takes it took to align the photo just right so you couldn't see her breasts. Is that how people normally do one-handed handstands? Or just trying to tastefully censor? Amanda Bingson - Hammer Throw Athletes come in all shapes and sizes. Brittney Griner - Phoenix Mercury OK this one is not even trying to pretend like they're not trying to censor them. Does this contrived pose effectively hide my thunder? Bryce Harper - Washington Nationals Chantae McMillan - Heptathlete Another "randomly" placed arm that magically hides breasts as well. Indianapolis Colts O-Line