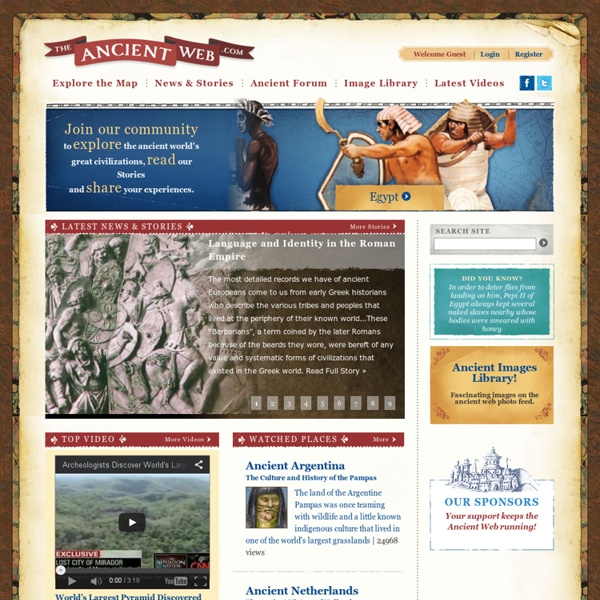 The Ancient Wall as a Cultural Barrier The great wall of china is the most monumental barrier ever created in the ancient world. It is easily the most popular image we associate with the ancient Chinese Empire itself, but it has become so mythologized by in our imagination that we don’t realize it was actually the most extreme cultural barrier ever created. It’s sole purpose was to separate two groups of people, those who were civilized, and those who were not. Read Full Story »

Herodotus Place in history[edit] Herodotus announced the size and scope of his work at the beginning of his Researches or Histories: Ἡροδότου Ἁλικαρνησσέος ἱστορίης ἀπόδεξις ἥδε, ὡς μήτε τὰ γενόμενα ἐξ ἀνθρώπων τῷ χρόνῳ ἐξίτηλα γένηται, μήτε ἔργα μεγάλα τε καὶ θωμαστά, τὰ μὲν Ἕλλησι, τὰ δὲ βαρβάροισι ἀποδεχθέντα, ἀκλεᾶ γένηται, τὰ τε ἄλλα καὶ δι' ἣν αἰτίην ἐπολέμησαν ἀλλήλοισι.[2] Herodotus of Halicarnassus, his Researches are here set down to preserve the memory of the past by putting on record the astonishing achievements of both the Greeks and the Barbarians; and more particularly, to show how they came into conflict.[3] His record of the achievements of others was an achievement in itself, though the extent of it has been debated. His place in history and his significance may be understood according to the traditions within which he worked. His work is the earliest Greek prose to have survived intact.

2,000-Year-Old Mosaics Uncovered In Turkey Before Being Lost To Flooding We usually write about new contemporary artists at Bored Panda, but these fascinating discoveries recently made by a team of archeologists in the Turkish city of Zeugma has given us the opportunity to witness the unveiling of Greek and Roman art that hasn’t been seen in thousands of years. The site caught the attention of the international archaeological community when it was threatened by flooding due to the construction of a nearby dam in southern Turkey in 2000. When a team of archaeologists led by Professor Kutalmış Görkay of Ankara University began excavating, they found stunning and well-preserved glass mosaics rich with color. Read on for more information about this fascinating find! History Powerpoint Presentations - Free download History Powerpoint Presentations free to download. Free History PowerPoint presentations. Great for KS1 KS2 KS3 KS4 and post 16 A level lessonplans, K-12 and more.

Who Invented Yoga? History has always been important to me: history keeps me connected and history gives me perspective. But history can also be complex and confusing. How old are our asanas or meditation practices? Answer: it depends, because there are so many expressions and schools of yoga. What was the social condition of India like during Buddha’s time? ETUDES ARCHEOLOGIQUES Archaeologists uncover evidence of large ancient shipyard near Rome University of Southampton Source - What Can Bonobos Tell Us about Ourselves? When newspaper headlines recently screamed that both humans and chimpanzees are “natural born killers,” this was obviously hype. Not only were some articles accompanied by a picture of two playing chimps, with their mouths wide open the way apes laugh (which was mistaken for aggression), there was a much deeper flaw. The media frenzy was instigated by a Nature paper that reported 152 confirmed, inferred, or suspected killings among wild chimpanzees, mostly by males—and only one suspected killing among wild bonobos.

Haywood, J.: The New Atlas of World History: Global Events at a Glance. When did humans first inhabit different parts of the world? What was happening in China when Alexander the Great conquered the Persian Empire? What was the global reach of the great religions at the time of the Reformation in Europe? The New Atlas of World History is the first historical atlas to present global history in a series of uniform world maps, allowing at-a-glance comparison between different periods and regions. This stunningly illustrated atlas features 55 specially commissioned full-color maps that cover the whole of human history, from 6 million years ago to today. Accompanying 48 of the maps are detailed illustrated timelines that list important cultures, events, and developments.

Regimen Sanitatis Salernitanum - A Salernitan Regimen of Health A Salernitan Regimen of Health The Regimen Sanitatis Salernitanum is one of the most popular poems in the history of both medicine and literature. Written sometime during the twelfth or thirteenth centuries, there have been over 100 manuscript versions and approximately 300 printed editions. Although the work claims to be the product of the famous medical school of Salerno, Italy, and written for an anonymous English king, the true author is entirely unknown. Mesopotamian Astronomy - Babylonian and Persian History Ever since man first looked up at the stars and asked the question, “Are we Alone?” the history of astronomy has shaped the course of human society, connecting science with the inbuilt human spirituality and sense of wonder at the unimaginable vastness of the cosmos. Now seen as the domain of loveable eccentrics, such as Patrick Moore, the late, great Carl Sagan, and Brian May, it is easy to forget how the science of astronomy has pervaded nearly every aspect of human history, and oversaw the rise and fall of great civilizations. The History of Astronomy - Shaping Human History

Flail In Latin there was a word that stood for 'a winnowing tool' or 'whip'. It was flagellum (which was, itself, a diminutive, or more concise, form of the word: flagrum: 'to whip'). Some sources give the origin of the Latin as a Proto-Indo-European word: bhlag, which signified 'to beat'. The people of the northern Europe region who spoke Old High German converted the Latin word into its own: flegel.