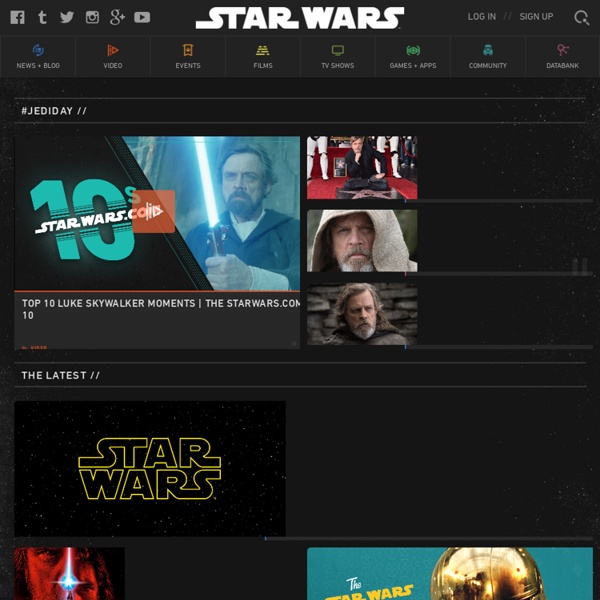 Become a Professional Organizer - Career Guides by FabJob People Have Said… Jennifer James, Editor: The FabJob Guide to Become a Professional Organizer can make your dream of becoming a professional organizer a reality. The guide will teach you how to set up an organizing business and how to organize people, homes, and offices. Experts share insider tips on how they grew their start-ups into successful organizing businesses. You’ll be amazed at how inexpensive and simple it is to get started.”

25 Bear Logos Another logo showcase, but this time on Bear Logos! Here are 25 hand picked logos that we think look awesome. Make sure to check out these related articles. 25 Impressive Cloud Logos31 Honest Logo Slogans20 Smart Logos Using Negative Space StarWars Zone By Albert Ching It can be intimidating to think of a new story set in the familiar territory of the original "Star Wars" trilogy. Luckily for Matt Kindt, that intimidation led to inspiration. Despite being a fan of the franchise, the Mind MGMT" creator originally declined when Dark Horse Comics asked him if he was interested in writing a Star Wars miniseries, due both to his busy schedule and the uncertainty that he'd be able to come up with something new to the franchise.

Star Wars Episode IV: A New Hope Lucas began writing the script to Star Wars after completing his previous film American Graffiti and based the plot outline on Akira Kurosawa's The Hidden Fortress and the 40's Flash Gordon serials. Lucas approached Alan Ladd, Jr. after United Artists and Universal Pictures rejected his script and the project was planned to be financed and released through 20th Century Fox. During this time, the script underwent numerous changes and Lucas founded Industrial Light & Magic to create the visual effects for the film. LifeClever ;-)The 7 deadly sins of résumé design So you’ve labored with sweat and tears writing your résumé, and now you’re all set to turn it into a magnificently designed creation. Unfortunately, with the freedom of modern computers and fancy software, comes huge opportunities for abuse. When it comes to résumés, both non-designers and professional designers commit some almost unforgivable sins. Here are the 7 deadly sins of résumé design and how to repent: 1.

5 Data Insights into the Headlines Readers Click A Conductor study finds that the more explicit a headline is as to the reader takeaway, the more the headline resonates. The new digital economy has created a wealth of new opportunity for modern marketers across search, social networks, and digital channels. Digital marketing has brought with it the opportunity to create leads, drive engagement, and drive sales at costs far less than traditional offline channels. In some ways, though, online marketing has been victimized by its own success. Viral media site Upworthy's co-founder Peter Koechley describes it this way: "When we look at the media landscape, we see there being more of a demand problem than a supply problem — how do you get people to care about important stuff amidst the avalanche of content we all face each day?"

Force (Star Wars) Lucas has attributed the origins of "The Force" to a 1963 abstract film by Arthur Lipsett, which sampled from many sources. One of the audio sources Lipsett sampled for 21-87 was a conversation between artificial intelligence pioneer Warren S. McCulloch and Roman Kroitor, a cinematographer who went on to develop IMAX.

Intelligent Viewing: 100 Most Informative Video Collections on the Web Whether you’re a seasoned professional, in search of a new hobby, or a student looking for new material to help you study, watching online videos can be an effective method for learning something new. Videos are often more personal than text-only websites, and through partnerships with top universities and media outlets, they allow you access to some of the most exclusive events and lecture series in the world. Below you’ll find 100 informative and inspiring video collections for business, leadership, science and technology, the arts, language learning, news analysis, and more. General

Sliding Panels Template in CSS and jQuery A simple portfolio template, with project preview images that slide out to reveal the selected project. Browser support ie Chrome Firefox Safari Opera 9+ We’re not new to experimenting with portfolio templates. This time, we’ve been playing around with the idea of moving blocks of content as a way to transition from the main/gallery page to the project page. Amazon Archives CSS Form Submit Button Css3Menu.com You are in:Home Update as at March 3rd, 2017 Custom Search Beautiful as Aphrodite, Wise as Athena, Swifter than Mercury and stronger than Hercules, she is Wonder Woman! Weekly News for Designers (N.321) - Typography Starter Kit, Flexbox Toolbox, Pixel Art to CSS This is our popular weekly design news post where we share our favorite design related articles, resources and freebies from the past week. You can sign-up to our awesome weekly newsletter for some more amazing design articles, resources and freebies. New Resources & Tools