Jesus Christ is the ONLY way to Heaven! 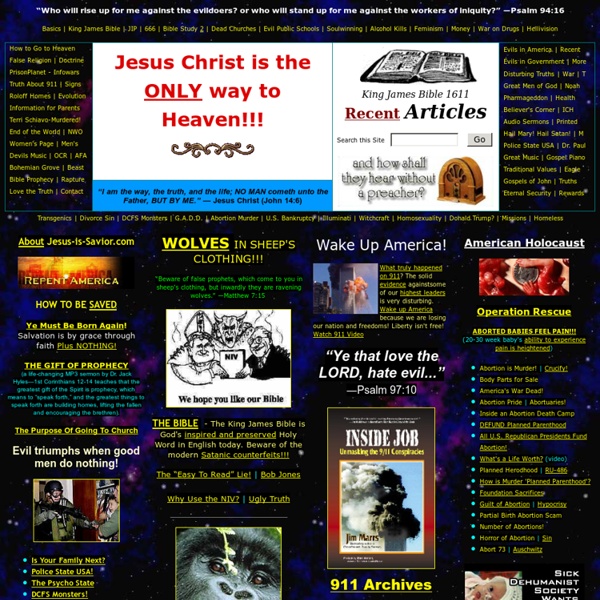 [OTA] The Oxford Text Archive Back of the Bible Everybody loves the Bible. It's shit-full of good advice you can apply to everyday life, from "turn the other cheek" to "God hates fags." What many people don't know, however, is that the Bible isn't just the basis for highly collectible Jesus plates—it's also an enormous goddamn thousands-years-old book. A lot of it's still applicable today. If you're looking for sage advice as to the spiritual direction of your life, Jesus apparently knows the score. But keep in mind, the Bible's as thick as a phone book. Once you wade past the shallow end of the New Testament into the back half of the Old Testament, get ready: it turns out God's a fucking lunatic, and He loves the taste of your blood. It can't be too many more years before Christians get themselves a decent copy editor and start publishing the Bible with a quick paragraph about the Garden of Eden and Noah before seguing right to Jesus, thus bypassing a thousand pages of dense insanity completely.

Bible Quizzes! Landover Baptist Bible Quizzes Test your knowledge of Scripture by taking one of our popular Bible Quizzes! The Secular Humanist Bible Quiz The Lord placed two types of people on this, His only planet that matters: (1) Those who critically analyze and evaluate all available information, making decisions, including those involving their belief systems, based on thought, facts and reason; and (2) Folks who have been blessedly spared such tedium. The Bible Versus the Crystal Ball Quiz God is omnipotent, omnipresent and all-knowing. The Bible Sex Quiz: Part III Were sex objects used in Biblical times? The Role of Women Bible Quiz Is a wife permitted to follow her own conscience? The Bible Logic Quiz Find out why Jesus burns people in Hell! God's Holy Hijinks Quiz Sure, He’s infallible, omnipotent, inerrant, and all that stuff. The Bible Poop Quiz Take this quiz to find out a few of the Lord's rules for preparing His favorite cuisine, human and animal excrement. God vs. What Did Jesus Say?

Bible History Online Images and Resources for Biblical History Landover Baptist | Where the Worthwhile Worship. Unsaved Unwelcome Evil Bible Home Page Early Christian Writings: New Testament, Apocrypha, Gnostics, Church Fathers Why I Left Mormonism - the Mormon Church Documentation on my reasons for leaving Mormonism is listed at the beginning of my story. These links are here so that it is clear I left Mormonism because Mormonism is not what it claims to be. I did not leave due to hurt feelings or "sin". Documentation for those investigating Mormonism Documentation in a format for Mormons The reasons are numerous and difficult to confine to a few words in a post on this web site. This is a listing of what is in this post: Brief Background of My Life as a Mormon Leaving Mormonism and Some Experiences as a Mormon History of Joseph Smith Book of Mormon Book of Abraham The Temple Church Members Glad to be Out A Brief Background of My Years as a Mormon I joined the Mormon Church when I was 20 years old and living in Upper Michigan. Leaving Mormonism Leaving Mormonism was not a step I took lightly. When I studied my way out of Mormonism it occurred in distinct layers or stages. Another disturbing item was the Hofmann forgeries in the 1980s. LDS History Cities

Exclusive excerpts from Christopher Hitchens' God Is Not Great. (2) - By Christopher Hitchens There is some question as to whether Islam is a separate religion at all. It initially fulfilled a need among Arabs for a distinctive or special creed, and is forever identified with their language and their impressive later conquests, which, while not as striking as those of the young Alexander of Macedonia, certainly conveyed an idea of being backed by a divine will until they petered out at the fringes of the Balkans and the Mediterranean. But Islam when examined is not much more than a rather obvious and ill-arranged set of plagiarisms, helping itself from earlier books and traditions as occasion appeared to require. Christopher Hitchens (1949-2011) was a columnist for Vanity Fair and the author, most recently, of Arguably, a collection of essays. The prophet died in the year 632 of our own approximate calendar. If true, this would date the Koran to a time fairly close to Muhammad's own life.

Ancient Evidence for Jesus from Non-Christian Sources Evidence from Tacitus Although there is overwhelming evidence that the New Testament is an accurate and trustworthy historical document, many people are still reluctant to believe what it says unless there is also some independent, non-biblical testimony that corroborates its statements. In the introduction to one of his books, F.F. Bruce tells about a Christian correspondent who was told by an agnostic friend that "apart from obscure references in Josephus and the like," there was no historical evidence for the life of Jesus outside the Bible.{1} This, he wrote to Bruce, had caused him "great concern and some little upset in [his] spiritual life. Let's begin our inquiry with a passage that historian Edwin Yamauchi calls "probably the most important reference to Jesus outside the New Testament Nero fastened the guilt . . . on a class hated for their abominations, called Christians by the populace. Evidence from Pliny the Younger Evidence from Josephus Did Josephus really write this? Notes