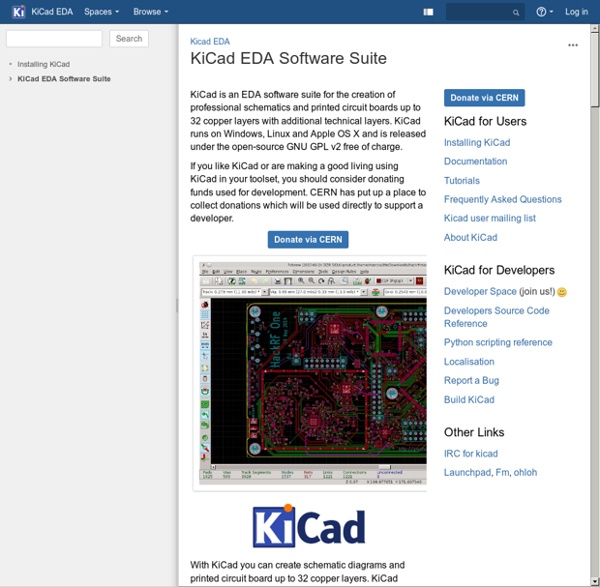 KiCad is an EDA software suite for the creation of professional schematics and printed circuit boards up to 32 copper layers with additional technical layers. KiCad runs on Windows, Linux and Apple OS X and is released under the open-source GNU GPL v2 free of charge. If you like KiCad or are making a good living using KiCad in your toolset, you should consider donating funds used for development. CERN has put up a place to collect donations which will be used directly to support a developer. With KiCad you can create schematic diagrams and printed circuit board up to 32 copper layers. KiCad comes with a rich set of libraries with 3D models as well.KiCad is a mature EDA software tool under active development by a team of developers and a vibrant user group. Eeschema, schematic editor.Pcbnew, printed circuit board editor, with a 3D viewer.Gerbview, Gerber file viewer. And then some other auxiliary tools: KiCad is under heavy development. STEP 1, schematic capture. STEP 3, PCB layout.

Cool Tools Cool Tools Show 189: Jordan Bunker Our guest this week is Jordan Bunker. Jordan is a freelance engineer, designer, artist, and prop-maker based out of Oakland, California. He’s also a former Make: magazine technical editor and BattleBots robot builder. Subscribe to the Cool Tools Show on iTunes | RSS | Transcript | Download MP3 | See all the Cool Tools Show posts on a single page Show notes: Dykem Steel Blue Layout Fluid Spray ($14) When working with metals, it’s useful to be able to make clear, precise lines on the surface to be worked on. McMaster-Carr Catalog MCMaster Carr is one of my go-to companies for just about any kind of material or hardware needed for a project. Air Force Jumpsuit (used, varies) In my shop, I do a lot of welding, grinding, and working with chemicals. Hot Air Rework Station ($55) Most of the prototyping I do requires electronic design as well, and if you’re working with surface mount components, a hot air station is pretty vital. Also mentioned:

GNU Radio - WikiStart - gnuradio.org Introduction¶ GNU Radio is a free & open-source software development toolkit that provides signal processing blocks to implement software radios. It can be used with readily-available low-cost external RF hardware to create software-defined radios, or without hardware in a simulation-like environment. It is widely used in hobbyist, academic and commercial environments to support both wireless communications research and real-world radio systems. GNU Radio is licensed under the GNU General Public License (GPL) version 3 or later. All of the code is copyright of the Free Software Foundation. Content¶ 0. Registration for GRCon16 is now open! I. If you've never touched GNU Radio before, these pages will get you started with a running installation of GNU Radio and will show you how to take your first steps with this software radio tool. II. GNU Radio has two manuals: one for the C++ API and another for the Python API. Documentation on this wiki: III. IV. V. VI. Related projects¶ Other Languages¶

First third-party “Steam Machine” could already be a console-beater When Valve laid out a range of performance tiers for the 300 Steam Machine prototypes it would be sending to beta testers, the company was clear that other hardware makers would be revealing their own designs for SteamOS-powered gaming rigs in the future. Custom PC maker iBuyPower has now become the first company to unveil a prototype for one of those designs, laying out a $499 white box with a GPU that’s comparable or slightly better than those found in the recently launched PS4 and Xbox One. The Verge reports that iBuyPower’s console-sized prototype box ("bigger than a PlayStation 4 but smaller than Microsoft's Xbox One"), which it plans to sell next year, includes an AMD Radeon R9 270 graphics card. That card was launched earlier this month at a starting price of $179, and it's intended to replace AMD’s 7850 and 7870 GPUs—close architectural relatives to those inside Microsoft's and Sony’s nearest consoles.

Satellite Tracking System: Orbitron by Sebastian Stoff / Satellite tracking easiest ever! The first artificial satellite was put in the space on October 4, 1957 by the Russians. It was named Sputnik 1, and spent 92 days in Earth orbit. Since then man has launched thousands of rockets, and put thousands of satellites in orbit. There are more than 8000 objects in orbit now, including operational, non-operational, rocket bodies, and debris. They are orbiting at an altitude from 150, up to several thousands kilometers. For more than ten years people have been able to track satellites on a computer using satellite tracking software like Orbitron. Due to predictable conditions of satellite movement in space (lack of atmosphere) computer software can calculate a satellite's position for given moment. To keep tracking software working precisely, one should update elements periodically. You must remember that TLE data for an object that has maneuvered since the last elset is no longer any good. Why do we track satellites?

Welcome to Linux From Scratch!