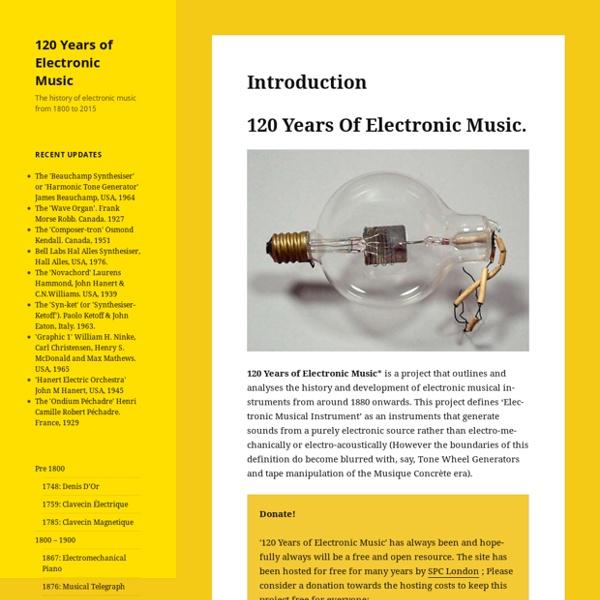 These 6 Electronic Instruments Go from Retro to Bananas There are all kinds of DIY instruments available for you to experiment with, but electronic instruments have to be some of the craziest. From the Theremin, using radio waves to control pitch and volume, to an instrument controlled, literally, by bananas, the options for “electro-musical” creativity are nearly endless! Circuit Bending Circuit bending could refer to any number of instruments, but it’s the art of hacking an existing electronic instrument or toy into something that sounds, well, different. This video gives a broad introduction to the technique. It’s probably best to start with something inexpensive or that you don’t care about.

Theremin World - Theremin FAQ Home / Learn / Theremin FAQ New to the theremin? Here's a list of common questions and answers we've heard over the years to help you get started! Q: What is a theremin? The History of Electronic Music, 1800-2015: Free Web Project Catalogues the Theremin, Fairlight & Other Instruments That Revolutionized Music Hang around this site long enough and you’ll learn a thing or two about electronic music, whether it’s a very brief history of the Moog synthesizer, or the Theremin, or an enormous, obscure ancient ancestor, the Telharmonium. These mini-lessons are dwarfed, however, by the amount of information you’ll find on the site 120 Years of Electronic Music, wherein you can read about such strange creatures as the Choralcelo, the Staccatone, the Pianorad, Celluphone, Electronde, and Vibroexponator. Such oddities abound in the very long history of electronic musical instruments, which the site defines as “instruments that generate sounds from a purely electronic source rather than electro-mechanically or electro-acoustically.” Despite these rather strict technical parameters, the site’s author Simon Crab admits that the boundaries “do become blurred with, say, Tone Wheel Generators and tape manipulation of the Musique Concrete era.”

MidiSeq sequencer Overview MidiSeq is a polyphonic MIDI step sequencer with some great features, such as note step advance, step modifiers (tie, half, strum, and accent), super stable internal clock, nice swing and two modulation sources with velocity, after touch and CC destinations. MidiSeq records and plays back sequences of steps with up to 15 notes per step. Maximum number of steps depends on amount of notes in each step. If all steps have only one note, the maximum sequence length is about 300 notes. Four notes per step sequences can have up to a 100 steps. Make your very own Tiny Ukulele This tutorial teaches you how to make the world’s smallest (and probably only) capacitance-piezo-buzzer ukulele. A ukulele is an instrument from Hawaii that looks like a small guitar with four nylon strings. Our strings will be made of wire and work by measuring the capacitance and then play the corresponding tone on a piezo buzzer. The ukulele itself is made of laser cut plywood. This is what the final result will sound like:

Recording and Playing Machines Fixing and reproducing the spoken word were major concerns for the inventors of the phonograph in the late 1870s: ”Mr. Edison, regretting that we could not get an idea of the voice and intonations of our famous men, speakers, scholars and musicians, had the idea of keeping phonograms that would have collected their speech or their songs for future generations“ (Article in the Journal of the Exposition universelle de 1889, Paris, cited by J.Perriault, in Mémoires de l’ombre et du son : une archéologie de l’audio-visuel, Flammarion, 1981, p. 184). As techniques evolved, sound recording and playing machines went from being fair attractions to work tools, notably for typists, eventually becoming private entertainment centres for individuals. This exhibition, drawn from the collections of nine major cultural institutions gathered in the Europeana Sounds project, offers a selection of machines that illustrate a wide range of techniques and technologies.

Highland Cathedral Highland Cathedral is a popular melody for the Great Highland Bagpipe. This melody was composed by German musicians Ulrich Roever and Michael Korb[1] in 1982 for a Highland games held in Germany.[2] It has been proposed as the Scottish national anthem to replace unofficial anthems Scotland the Brave and/or Flower of Scotland.[3] It has subsequently undergone various orchestrations and had lyrics added in English and in Scottish Gaelic. The tune has been performed by the Royal Scots Dragoon Guards, and featured in the album, Spirit of the Glen, which won a Classical Brit award in 2009.[4] The song has been performed at numerous Scottish cultural events, including Scotland's Rugby Union games.[1] The tune was the Royal Hong Kong Police Anthem under British rule which ended in 1997. Lyrics[edit]

What is Filk? Singout article Filk Music by Jordin Kare No, that's not a typographical error (although the word started as one, long ago). Filksongs and filksinging are the folk music of a time and a community, just as, say, Celtic ballads, or new England sea chanteys are — except the time is today (or tomorrow) and the community is science fiction and fantasy fandom. Build a laser show that moves to your favourite music The first thing we want to do is provide power to the laser itself, and provide any easy method to turn it on and off. The power is coming from the AC/DC adapter, but it ends in one of those plugs we're all so familiar with. What we need to do is wire a receptacle (which connects to our power adapter plug), to a switch (which allows us to turn power on and off), which then goes to the laser driver board itself. Don't connect anything to the laser yet!