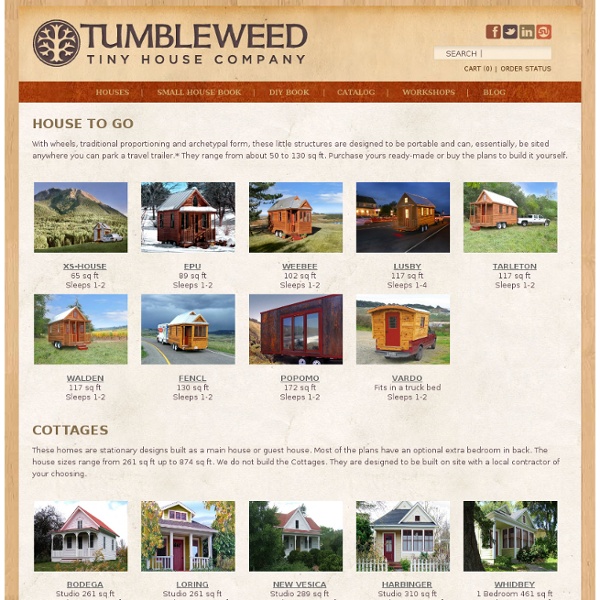 With wheels, traditional proportioning and archetypal form, these little structures are designed to be portable and can, essentially, be sited anywhere you can park a travel trailer. They range from about 117 to 172 sq ft. Purchase yours ready-made or buy the plans to build it yourself. See all the floor plans. These homes are stationary designs built as a main house or guest house. Most of the plans have an optional extra bedroom in back.

containerbay There is growing interest in the use of shipping containers as the basis for habitable structures. These "icons of globalization" are relatively inexpensive, structurally sound and in abundant supply. Although, in raw form, containers are dark windowless boxes (which might place them at odds with some of the tenets of modernist design...) they can be highly customizable modular elements of a larger structure. Future in Ruins: Small Open-Plan, Concrete & Wood Cabin Death, decay, destruction? Wait, what? No, there are no plans to demolish this place now or in the near future – but years, decades or centuries from now if the retreat becomes abandoned it will decay in a visually-dynamic way, wood pealing away from a poured-concrete platform and central cast-in-place chimney.

Small House Society: Resources for Life “Better Living Through Simplicity.” History. Founded in 2002, the Small House Society is a cooperatively managed organization dedicated to the promotion of smaller housing alternatives which can be more affordable and ecological. Mission. What It Really Costs To Build A Tiny Home It amazes me all the claims you read about super cheap tiny house construction. Honestly, I feel these claims are misleading at best. To build any structure meant for extended residency, year round living, costs money. It’ll cost what you have planned and probably much more to settle into living in a small space. My plan parameters were simple. I wanted a comfortable home which meets all my needs, but didn’t cost me 30 years of loan principle and interest.

Living Van & Vintage Shows My Living Van Living vans are like caravans, but usually more heavily built to withstand commercial use. This one was built by Cheshire County Council around 1955, it stands nine feet high and is about ten feet long, and weighs about a ton. There is a small brass plaque inside which says Roads and Bridges Dept DIST.no.3NO.210/17 If anyone knows exactly what these numbers refer to, I would like to hear from you. Tree House / Robert Potokar and Janez Brežnik The Tree House, designed by Robert Potokar of Robert Potokar Architecture Office and co-designer Janez Brežnik, is a wooden play structure that is elevated without requiring nearby trees to support its weight. The concept, originally designed in February 2008 as since been realized three times. More on this project after the break.

Tiny House Living So what is the small house society and the small house movement all about? Let’s start with downsizing to a smaller house. If you want to simplify your life one of the smartest things you can do is move into a smaller space. And that’s what the small house movement is all about, isn’t it? Woodie Gallery: Woodie Motorhomes & Campers - Old Woodies Gallery Woodie Motorhomes, House Cars & Campers Once the car was a familiar sight on the American roads, it did not take long for someone to create a motorhome. This photograph of a happy family in their home on wheels was published in 1909.