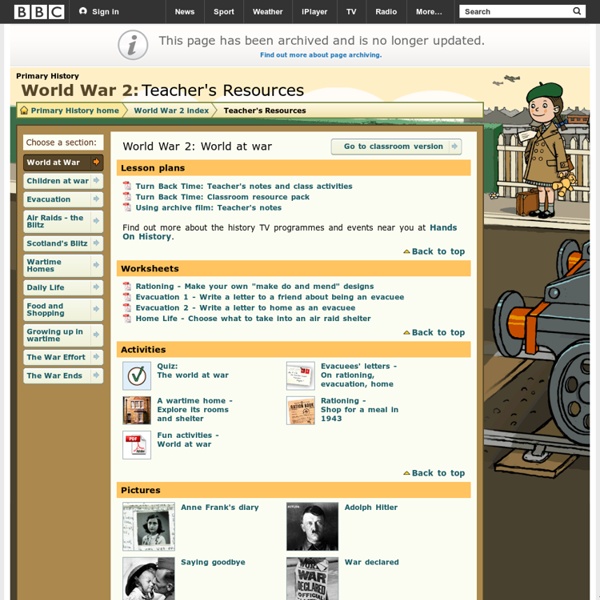 World War II General Resources WWII Web Sites Encyclopedia of the Second World War The Second World War is a Spartacus Educational website and enables one to research individual people and events of the war in detail. The sources are “hypertexted” so that the visitor can research the newspaper, organization, etc., that produced the source. There are several subsections including those on: Background to the War; Nazi Germany, Chronology of the War, Political Leaders, European Diplomacy, Major Offensives, British Military Leaders, USA Military Leaders, German Military Leaders, Japanese Military Leaders, The Armed Forces, The Air War, The Resistance, Scientists & Inventors, War at Sea, Resistance in Nazi Germany, The Holocaust, War Artists, Weapons and New Technology. HyperWar: World War II Hyper War is a “hypertext” history of the second World War and features diplomatic and political documents. World War II Sites This site serves as a gateway to World War II sites appropriate for students and teachers. U.S.

BBC World War 2 World War II: Home Front World War II, or "The Good War" as it has often been called, ushered in new opportunity, new prosperity, and an entirely new lifestyle for many Americans. Wartime mobilization pulled the American economy out of depression by employing millions and invigorating the nation as a whole. "The Good War," however, didn't provide the remedy for many social problems, and in some cases rapid population movement, concern over national security, and wartime rhetoric only exacerbated racial, ethnic, and class-based tensions at home. Another world war... and so soon after the first! Can you imagine how this may have struck the many Americans who had lived through World War I and who were trying desperately to pull themselves out of economic turmoil when the Second World War broke out in Europe? Let's recap: the declaration of war in 1917 came only after careful deliberation and debate—lots of it—between President Woodrow Wilson and many vocal government officials.

Anne Frank and her family were also denied entry as refugees to the U.S. Portrait of Anne Frank at age 12, sitting at her desk at the Montessori school in Amsterdam. (Courtesy Anne Frank House, Amsterdam) Many have noted the historical parallels between the current debate over Syrians seeking refuge in the United States and the plight of European Jews fleeing German-occupied territories on the eve of World War II. Among the many who tried — and failed — to escape Nazi persecution: Otto Frank and his family, which included wife, Edith, and his daughters, Margot and Anne. "Otto Frank’s efforts to get his family to the United States ran afoul of restrictive American immigration policies designed to protect national security and guard against an influx of foreigners during time of war," Breitman wrote. world worldviews Dallas shooting updates News and analysis on the deadliest day for police since 9/11. post_newsletter353 follow-dallas true after3th false Today's WorldView What's most important from where the world meets Washington Please provide a valid email address.

National Churchill Museum | Winston Churchill's Their Finest Hour Speech I spoke the other day of the colossal military disaster which occurred when the French High Command failed to withdraw the northern Armies from Belgium at the moment when they knew that the French front was decisively broken at Sedan and on the Meuse. This delay entailed the loss of fifteen or sixteen French divisions and threw out of action for the critical period the whole of the British Expeditionary Force. Our Army and 120,000 French troops were indeed rescued by the British Navy from Dunkirk but only with the loss of their cannon, vehicles and modern equipment. This loss inevitably took some weeks to repair, and in the first two of those weeks the battle in France has been lost. I am not reciting these facts for the purpose of recrimination. Of this I am quite sure, that if we open a quarrel between the past and the present, we shall find that we have lost the future. We have, therefore, in this Island today a very large and powerful military force. Winston Churchill

What Americans thought of Jewish refugees on the eve of World War II The results of the poll illustrated above by the useful Twitter account @HistOpinion were published in the pages of Fortune magazine in July 1938. Fewer than 5 percent of Americans surveyed at the time believed that the United States should raise its immigration quotas or encourage political refugees fleeing fascist states in Europe — the vast majority of whom were Jewish — to voyage across the Atlantic. Two-thirds of the respondents agreed with the proposition that "we should try to keep them out." [Yes, the comparison between Jewish and Syrian refugees matters] To be sure, the United States was emerging from the Great Depression, hardly a climate in which ordinary folks would welcome immigrants and economic competition. But look at the next chart, also tweeted by @HistOpinion. [A couple of caveats: Polling in this period, including Gallup surveys, was not as scientifically rigorous as it later became. [Europe’s fear of Muslim refugees echoes rhetoric of 1930s anti-Semitism] Read more:

Collections Search Search Results Searching Entering terms in the main search box will return results where those terms occur anywhere in the record. You may target your search to certain fields by changing the dropdown selection to the right of the 'Search' box from "All Fields." Facets Use the "facets" to limit your searches. Advanced Search An advanced search is available by clicking the link "More Options (Advanced Search)". Geographic Name Expansion Collections Search also embodies a "geographic name expansion" feature. Boolean Queries Collections Search supports boolean queries including AND, NOT, and OR (which must be uppercase) and parentheses.