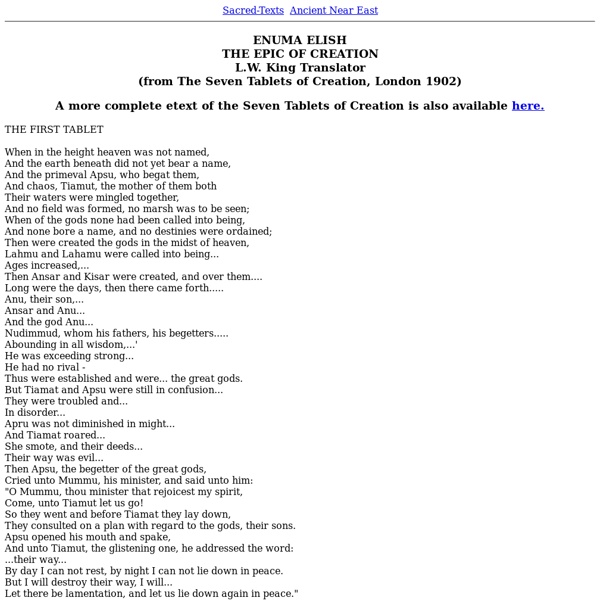 Sacred-Texts Ancient Near East ENUMA ELISH THE EPIC OF CREATION L.W. King Translator (from The Seven Tablets of Creation, London 1902) A more complete etext of the Seven Tablets of Creation is also available here. When in the height heaven was not named, And the earth beneath did not yet bear a name, And the primeval Apsu, who begat them, And chaos, Tiamut, the mother of them both Their waters were mingled together, And no field was formed, no marsh was to be seen; When of the gods none had been called into being, And none bore a name, and no destinies were ordained; Then were created the gods in the midst of heaven, Lahmu and Lahamu were called into being... Ages increased,... [about 30 illegible lines] ... he spake: ... thy... he hath conquered and ... he weepeth and sitteth in tribulation. ... of fear, ... we shall not lie down in peace. ... Tiamat made weighty her handiwork, Evil she wrought against the gods her children. [A gap of about a dozen lines occurs here.] They rejoiced... Related:  old language and texts

Liber Juratus Honorii, or the Sworn Book of Honorius This done, in the middle of the circles, namely in the center, make a pentagram thus: in the middle of which should be the sign 'Tau', thus: , and above that sign, write the name of God El, and underneath this another name of God, namely, Ely, in this fashion: Then, below the uppermost angle of the pentagram, write these two letters: .l.x. Then, around the pentagram make a heptagon; it may touch the uppermost side of the pentagram, <its second> which is after the middlemost top angle, where are written .l.x. And in the same side of the heptagon write this name of the holy angel, which is Casziel. Then, around that preceding heptagon, make another heptagon, not made like the first, but in such a manner that the one side of it will intersect the previous side of the same. Then make another such heptagon, like the first, whose seven angles touch the seven angles of the second heptagon, and the which should be shown doubled. Then, in each of the angles of the second heptagon make a cross.

Egyptian Mythology Egyptian mythology: The Shabaka Stone - Memphite mythology Sekhmet and Ptah Osiris Excerpt. Courtesy Jon Bodsworth Anubis Excerpt. Courtesy Jon Bodsworth Re-Horakhte Excerpt. Courtesy Jon Bodsworth From time immemorial Egypt has been known as the country of two lands: The desertlike Upper Egypt, or the Red Land, and Lower Egypt, or the Black Land, where the soil is fertile. Even today 99 percent of the Egyptian population live in the Black Land. by Charles H. From the Shabaka Stone [King of Upper and Lower Egypt] is this Ptah, who is called the great name: [Ta-te]nen [South-of-his-Wall, Lord of eternity] [the joiner] of Upper and Lower Egypt is he, this uniter who arose as king of Upper Egypt and arose as king of Lower Egypt. The Memphite theology takes over older local notions of creation, such as that of Hermopolis, which describes creation proceeding from eight primordial beings of chaos who inhabited the primeval slime. His (Ptah's) Ennead is before him as teeth and lips.

Library of Ashurbanipal The Royal Library of Ashurbanipal, named after Ashurbanipal, the last great king of the Neo-Assyrian Empire, is a collection of thousands of clay tablets and fragments containing texts of all kinds from the 7th century BC. Among its holdings was the famous Epic of Gilgamesh. Due to the sloppy handling of the original material much of the library is irreparably jumbled, making it impossible for scholars to discern and reconstruct many of the original texts, although some have survived intact. The materials were found in the archaeological site of Kouyunjik (ancient Nineveh, capital of Assyria) in northern Mesopotamia. Old Persian and Armenian traditions indicate that Alexander the Great, upon seeing the great library of Ashurbanipal at Nineveh, was inspired to create his own library. Discovery[edit] Three years later, Hormuzd Rassam, Layard's assistant, discovered a similar "library" in the palace of King Ashurbanipal (668 - 627 BC), on the opposite side of the mound. Contents[edit]

Internet Sacred Text Archive Home Gods of Ancient Egypt Main Menu Many books have been written on religion in ancient Egypt. This brief overview is meant only to explain some of the basic concepts and to introduce some of the gods. Religion in ancient Egypt was not unlike modern times. Today, not everyone believes in the same way, or of the same god. The creator of all things was either Re, Amun, Ptah, Khnum or Aten, depending on which version of the myth was currently in use. As stated earlier, certain gods were worshipped in different areas. Amaunet - A female counterpart to Amon and one of the primordial gods of the Hermopolitian Ogdoad (group of eight gods). Amon - Usually associated with the wind, or things hidden, and was also of the Hermopolitian Ogdoad. Antaios - He was originally a double god, "the two falcons", that was later joined to create one, probably that of Horus. Anuket - Worshipped at Elephantine, she was associated with the gazelle. Atum - A primordial god that was represented in the form of a human and a serpent.

Akkadian language The mutual influence between Sumerian and Akkadian had led scholars to describe the languages as a sprachbund.[3] Akkadian proper names were first attested in Sumerian texts from ca. the late 29th century BC.[4] From the second half of the third millennium BC (ca. 2500 BC), texts fully written in Akkadian begin to appear. Hundreds of thousands of texts and text fragments have been excavated to date, covering a vast textual tradition of mythological narrative, legal texts, scientific works, correspondence, political and military events, and many other examples. By the second millennium BC, two variant forms of the language were in use in Assyria and Babylonia, known as Assyrian and Babylonian respectively. Akkadian had been for centuries the lingua franca in Mesopotamia and the Ancient Near East. Classification[edit] Within the Near Eastern Semitic languages, Akkadian forms an East Semitic subgroup (with Eblaite). History and writing[edit] Writing[edit] Development[edit] Decipherment[edit]

8 Ancient Writing Systems That Haven't Been Deciphered Yet The Indus Valley civilization was one of the most advanced in the world for more than 500 years, with more than a thousand settlements sprawling across 250,000 square miles of what is now Pakistan and northwest India from 2600 BCE to 1900 BCE. It had several large, well-planned cities like Mohenjo-daro, common iconography—and a script no one has been able to understand. Over at Nature, Andrew Robinson looks at the reasons why the Indus Valley script has been so difficult to crack, and details some recent attempts to decipher it. Since we don't know anything about the underlying language and there's no multilingual Rosetta stone, scholars have analyzed its structure for clues and compared it to other scripts. Most Indologists think it's "logo-syllabic" script like Sumerian cuneiform or Mayan glyphs. One team has created the first publicly available, electronic corpus of Indus texts. The Indus Valley script is far from the only one to remain mysterious. 1. 2. 3. 4. 5. 6. 7. 8.