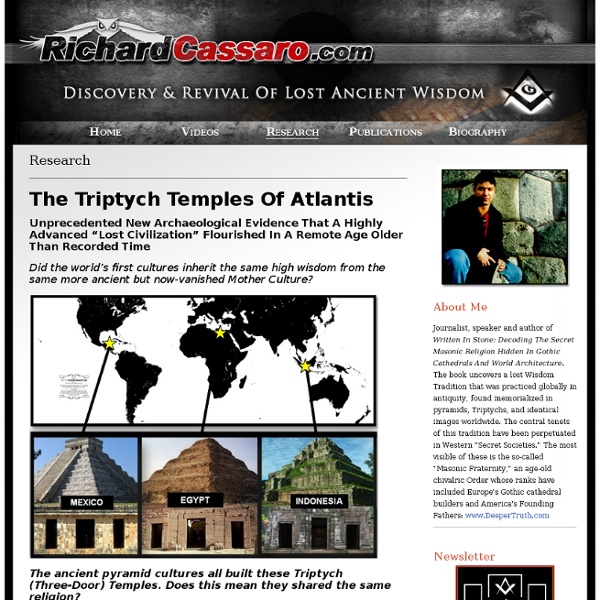 The Triptych Temples Of Atlantis Unprecedented New Archaeological Evidence That A Highly Advanced “Lost Civilization” Flourished In A Remote Age Older Than Recorded Time Did the world’s first cultures inherit the same high wisdom from the same more ancient but now-vanished Mother Culture? The ancient pyramid cultures all built these Triptych (Three-Door) Temples. Does this mean they shared the same religion? Like the pyramids, the presence of these Triptych Temples worldwide throws enormous weight behind the “Atlantis” theory—the idea that civilization has much older roots than presently accepted by science; that there is a major forgotten episode in human history; that an advanced ancient culture once flourished but was destroyed in a cataclysm; and that history’s first known cultures were inheritors of its legacy. There are two different versions of history. We already know the mainstream version found in history books. Above: No records exist of any contact between these civilizations.

Top 10 Lesser Known Mysteries Mysteries It was Einstein that said ‘The most beautiful thing we can experience is the mysterious. It is the source of all true art and all science. He to whom this emotion is a stranger, who can no longer pause to wonder and stand rapt in awe, is as good as dead: his eyes are closed.’ The Brentford area of London is a peculiar place in terms of the names. There have been no other sightings since, and the Legendary Griffin has drifted into local folklore. Amphibians in Ancient Iraq In ancient Mesopotamia, the world’s first academically ratified, fully functioning civilizations of Babylon, Sumer and Akkadia emerged. A Sumerian priest named Berossus recorded how an amphibian, named Oannes, emerged from the Persian Gulf and taught the Sumerians numbers, medicine, astronomy, politics, ethics and law, encompassing all the necessities for civilized existence. Those who saw the animal dismissed claims it was a Hyena, due to its large hind legs. Valley of the Headless Men “Sign that parchment!

First Tongue: An early global language viewzone.com First Tongue: An Ancient Global Language Introducion [Above: Colorado wall originally enhanced with aluminum powder on location but here enhanced with white in Photoshop to reveal shapes. 37-44'58.91"N 103-28'48.96"W] In the last part of the 20th century, a handful of archaeologists discovered a collection of symbols carved in stone as petroglyphs that appeared to be writing. This unique collection of symbols was first examined in the Negev desert of Israel by Dr. The earliest examples of this writing were first described as graffiti left by workers of a turquoise mine. In the late 1990's, William McGlone, an amateur archaeologist and retired space engineer, discovered the same collection of symbols carved in heavily patinated stones surrounding the Southeast Colorado town of La Junta. In 1999, Viewzone visited and photographed the petroglyphs in Colorado and posted them on the internet for comments. Viewzone || Comments Gary Vey

The Mystery of Viracocha in the Ancient Americas | Otherworld Mystery What are countless carved images of a bearded man with European facial features doing in pre-Columbian art and architecture? Like the Olmec statues of Central America, whose giant heads depict seemingly “African” features, the Incan carvings of a figure known as Viracocha seem out of place (and time), at least according to accepted history. The Olmec Heads History teaches us that Columbus “discovered” the New World, and that the subsequent explorers and conquistadors were the first “white” men to visit the Americas. To explore the mystery of Viracocha, we will analyze these puzzling artifacts, drawing from the Incan legends and the monuments themselves, while also comparing Viracocha to other pre-Columbian figures who display striking similarities. The Stones In several ancient Incan (or pre-Incan) sacred sites, such as Tiwanaku and Puma Punku, you will find images of a man quite different from the rest. The Legends Beard and big nose Many Names, One Theme

Strange Fibers Inside The Bone Of The Starchild Skull In 2003 samples of the Starchild Skull's bone were examined using a scanning electron microscope. Previous research had discovered that the bone was thinner and more durable than normal human bone, and when examined under magnification strange fibers were found embedded within the bone. Although the fibers are present only inside the bone, mycologists were consulted in an attempt to identify them as a fungus or other organism. They reported that it did not appear to be a biological contamination. An unclassified medical condition called "Morgellons Disease" has been suggested as the cause of the fibers, but the size, shape, and appearance of the fibers in the Starchild bone are completely unlike those linked to Morgellons. > > > Read The Report Starchild Skull Fiber Slideshow

Amazing Metropolis Discovered in Africa is 200,000 years old! By Dan Eden for viewzone. They have always been there. People noticed them before. But no one could remember who made them -- or why? Something amazing has been discovered in an area of South Africa, about 150 miles inland, west of the port of Maputo. The image [top of page] is a close-up view of just a few hundred meters of the landscape taken from google-earth. This changed when researcher and author, Michael Tellinger, teamed up with Johan Heine, a local fireman and pilot who had been looking at these ruins from his years flying over the region. "When Johan first introduced me to the ancient stone ruins of southern Africa, I had no idea of the incredible discoveries we would make in the year or two that followed. Where it was found The area is significant for one striking thing -- gold. Did gold play some role in the dense population that once lived here? The individual ruins [see below] mostly consist of stone circles. How the Site was dated NEXT: The Dating of the Site

The Yosemite Mummies | | Greater AncestorsGreater Ancestors The “Yosemite Mummies” Photo from Ripley’s Believe it or Not who currently host the mummies. The Giants of Yosemite Valley By Bobbie Short The year, 1885. Seasoned miners, they were familiar with the natural formation of rock, this particular grouping struck Mr. The miners set about removing the pile of stones. “As pretty as any wall on any building that I have ever seen” is the way one miner described it. Disappointment fell heavily upon their heads as, in the end, they found the vault empty save a very large mummified corpse that lay on the ledge, which was carved from the natural stone for the express purpose of burial. Lighting their carbide headlamps they set about examining the vault to see if perhaps they had overlooked something perhaps a map or some other clue to where the inevitable treasure might be hidden. The miners removed parts of the animal skins to view the corpse and found it to be that of a woman holding a child to her breast. In an additional excerpt, Capt.

www.galactic-server.com/rampa/rahermit1.html OUTSIDE the sun was shining. Vividly it illumined the trees, threw black shadows behind the jutting rocks, and sent a myriad glinting points from the blue, blue lake. Here, though, in the cool recesses of the old hermit's cave, the light was filtered by overhanging fronds and came greenly, soothingly, to tired eyes strained by exposure to the glaring sun. The young man bowed respectfully to the thin' hermit sitting erect on a time-smoothed boulder. 'I have come to you for instruction, Venerable One,' he said in a low voice. 'Be seated,' commanded the elder. The old hermit kept silent, seemingly gazing into an infinity of pasts through eyeless sockets. Climbing ever upwards, living on the sparse grass or any herbs he could find, led to water for drinking by the tinkle of mountain streams, he kept a tenuous hold on the spark of life. The air became colder, the bite of the wind keener, but still he plodded on, upwards, ever upwards as if driven by some inner compulsion. 'Other galaxies?

The Mysterious Tarim Mummies Hidden behind the Himalaya and Karakoram mountain ranges and nestled between the Kunlun and Tien Shan ranges is the vast Tarim Basin, one of the hottest, driest deserts in the world. Yet it is here that one of the most outstanding anthropological finds of the 20th century was discovered. Over the past several years, Chinese archaeologists have dug up 100 or so Caucasiod mummies from the parched sands of the Täklimakan desert. The bodies date to between 2000 BC and 300 BC. Their corpses and attire are in remarkably good condition due to the arid environment, providing a unique glimpse into the prehistoric society that settled the Tarim Basin some four thousand years ago. Who were these ancient Caucasian residents of a remote area of the world that would later become part of the Silk Road? Chinese texts of the second century BC mention troublesome "barbarians" called the Yuezhi and the Wusun livng on China's far western borders. Many controversies have arisen. Sources J.P.

Sapelo Shell Rings: An ancient NativeAmerican civilization in Georgia | LostWorlds.org The oldest Native American civilization in the state of Georgia can be found along the Atlantic coast on Sapelo Island. Known as the Sapelo Island Shell Ring Complex, this site consists of three doughnut-shaped Indian mounds built from successive layers of different types of shells including oysters, conch, clams, and mussels. The rings rise approximately 20 feet above the tidal marsh and the largest of the three has a diameter of 255 feet. The site has been radiocarbon dated at 2170 B.C. making it older than many of Egypt’s pyramids! (Similar sites have been discovered in Florida such as the Horr’s Island Mounds and Guana River Shell Rings which are even older.) There are two theories regarding the formation of the Sapelo Shell Rings. The latest research seems to support the gradual accumulation theory. Archaeologist Victor Thompson researched and excavated this site over several years. Party Time at Sapelo What does seem to be intentional is the central plaza within the shell rings.

Gallery of mystery part 2 Peru bronze wheels, described by professor Rafael Larco Hoyle in his work "Peru"; they resemble very much modern gears. The famous "Kiev astronaut": it's the only European little statue found until now which shows so evident "spatial" features. Two prehistoric Japanese little statues: they represent creatures who wear special space-suits and big helmets joined to the space-suit by a sort of bolt collar. One of the two "helmets" (the one on the left) provided with enormous glasses, that resemble the polar glasses used to protect eyes from the light. Huge limestone statue eroded by water in Lultùn Caves, in Yucatan (Mexico), today submerged at a deep of hundredths of meters under the sea level. Painting by Filippo Lippi, "La Madonna e san Giovannino", made in XV century and kept in Palazzo Vecchio, in Florence (Italy). To know more: This photo shows the remains of the Antikythera mechanism (on the right the technical scheme).

Hollow Earth Evidence - Soviet Mir Space Station Video... | Morning Liberty Radio Program Hollow Earth Hohle Erde This video will blow your mind base in (under) Antarctica Hohle Erde Hollow Earth nazi base in Antartica -discovered by vlad. part 3 Here coordinates of nazi base After the release of my videos – they cleaned up that area. and now you're out there but snow will not see anything. They can be blamed on a mistake – but the picture clearly shows that someone tried to retouch this area. 0:05 А video about the operation highjump-also shows a similar area in the Antarctic oasis in the midst of snow and cold (Operation high jump) And ancient megalits and monuments on Earth. part 1 part 2 part4 AGHARTA in Hollow Earth Operation High-Jump In 1947 Secretary of the Navy James Forrestal sent a naval task force to Antarctic including Admiral Nimitz, Admiral Krusen and Admiral Byrd, called "Operation Highjump". In this regard however, the aryans have had an underground habitation in Antarctic for more than a million years.