Top 10 Most Beautiful Cities in the World 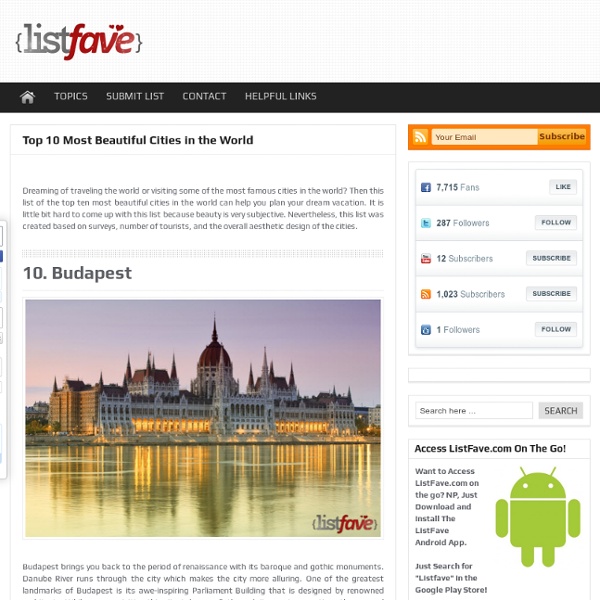 Dreaming of traveling the world or visiting some of the most famous cities in the world? Then this list of the top ten most beautiful cities in the world can help you plan your dream vacation. It is little bit hard to come up with this list because beauty is very subjective. Nevertheless, this list was created based on surveys, number of tourists, and the overall aesthetic design of the cities. Budapest brings you back to the period of renaissance with its baroque and gothic monuments. Danube River runs through the city which makes the city more alluring.

World's coolest zip lines It wouldn't be Vegas if zip lining didn't take place at night beneath a laser light show set to music. Zip lines have become a common feature of the Caribbean, but newcomer AdrenaLUNA provides the special treat of exploring a rainforest by night. A father-and-son team launched the Skyline Tour in 2002. It travels thousands of feet above ground and above the clouds near the summit of Haleakala Crater. If you want bragging rights, drive two hours from Johannesburg to the Sun City entertainment complex to conquer the world's longest zip line: roughly 1.2 miles of uninterrupted thrills. Look out for birds, rhinos and other creatures as you fly high through the Safari Park. Get your Rocky Mountain highs along the Zip Adventures zip lining tour in Vail, Colorado. Flightlinez, Las Vegas, Nevada AdrenaLUNA, St. Haleakala Skyline Tour, Maui, Hawaii Pronutro Zip 2000, Sun City, South Africa Flightline Safari, San Diego Wild Animal Park Zip Adventures, Vail, Colorado After the sun goes down in St.

21 Roads You Have to Drive in Your Lifetime There’s nothing like a road trip to really experience a country. From coastal highways and dizzying mountain passes, to scenic routes through national parks and bridges over great spans of water; roads are the circulatory system that connects a country. After an extensive search online, the Sifter has compiled a list of some of the most beautiful, challenging and unforgettable roads in the world. While hardly exhaustive, this list should provide great inspiration and bucket list fodder for those planning an upcoming trip. Please feel free to share any additional roads in the comments and perhaps a pt II will be compiled :) 1. State Route 1 (SR 1) is a major north-south state highway that runs along most of the Pacific coastline of the U.S. state of California. 2. Furka Pass (el. 2429 m.) is a high mountain pass in the Swiss Alps connecting Gletsch, Valais with Realp, Uri. 3. 4. 5. 6. The Seven Mile Bridge is a famous bridge in the Florida Keys, in Monroe County, Florida, United States.

The secret world of Disneyland Disneyland may look like a straightforward theme park. But there's a secret world hidden behind the balloons, castles and cotton candy - a place where wild cats roam the park at midnight, Mickey Mouse hides in the wallpaper, and movie stars sip martinis behind closed doors. Feline security It's not easy keeping the grounds of Disneyland utterly spotless, as well as free of unwanted pests. Hidden Mickeys At Disneyland, the round-eared Mickey Mouse emblem is everywhere. Cocktails behind closed doors Disneyland is dry - unless you can manage to get your name on the list at Club 33. Trick of the eye Things are not always as they appear at Disneyland. Always on stage At Disneyland, a janitor isn't a janitor - he's a 'cast member'. A light stays on When construction was underway in the early 1950s, Walt didn't want to miss a moment of his dream coming to life.

10 Most Unbelievable Places in the World There are ten most unbelievable places in the world that you definitely must visit before you die. 1. Tunnel of Love, Ukraine Image credits: Oleg Gordienko This powerful train tunnel of trees called the Tunnel of Love is located in Kleven, Ukraine. 2. Image credits: Allard Schager The sensational landscape provokes a visual effect hard to repeat in a life time. 3. Image credits: dadi360 Salar de Uyuni (or Salar de Tunupa) is the world’s largest salt flat at 10,582 square kilometers (4,086 sq mi). 4. Image credits: nipomen2 | sename777 Hitachi Seaside Park, located in Hitachinaka, Ibaraki prefecture, Japan, next to the Ajigaura Beach, is a flower park and a popular tourist destination. 5. Image credits: Kent Mearig The Mendenhall Glacier is a tongue of ice stretching 12 miles from the Juneau Icefield to Mendenhall Lake. 6. Image credits: MJiA The Red Beach is located in the Liaohe River Delta, about 30 kilometer southwest of Panjin City in China. 7. Image credits: Yuya Horikawa | Tomoaki Kabe 8.

The 20 Best Travel Websites on the Internet Update: Visit the 2012 version of The 20 Best Travel Websites on the Internet I hope that everyone who attended my SXSW Core Conversation panel on How to Make Money Traveling Around the World enjoyed the presentation. As promised, I have a listing of my top 20 favorite travel websites (in no particular order). I’m still working on my eBook “70 Vacations in 7 Months“. The project has consumed most of my time of late. The Top 20! Couch Surfing Hands down my favorite travel website on the internet. Travellers Point Travellerspoint is a small travel community that features expert travel advice. Momondo How can a Danish aggregator feature cheaper flights within the U.S, than any American flight aggregator? Escape The City Escape the City is a new website that continues to grow like wildfire. Hostel World My go to site for anything related to hostels. Trip-it I build almost all of my travel itineraries through Trip-it. AirBnB Airbnb is great for people who enjoy a finer lodging experience. Flyer Talk

Bangkok: still the world’s greatest backpacker hub? – Lonely Planet blog This is a guest post from Colm Hanratty, Editor at Hostelworld.com. Bangkok is unique for many reasons. On every second street corner you can sit down and get food that will tantalise your taste buds for next to nothing. Upon sitting down to eat, in the blink of an eyelid you can see a bunch of ‘working girls’ rub shoulders with a group of orange-clad Buddhists, all to the soundtrack of tuk-tuk drivers, hawkers at stalls and farang (foreigners) from all over the world. Something else that makes it unique is a road almost exclusively populated by budget travellers from around the globe: the Khao San Road. Having been lucky enough to have been to Bangkok twice in the last nine months, I was asked whether the Khao San Road still reigns supreme for budget travellers going to Thailand. Let me start with the Khao San Road. When it comes to hostels and guesthouses, while many are still in chaotic Banglamphu, budget accommodation is found all over the city. But what are these hostels like?

Amazing Collection of Beautiful Places and Spaces | Globe Traveling Our planet is far more impressive than we could imagine. It has the power to build landscapes that amaze us even after seeing them a few times. In this article I have gathered pictures of places and spaces in our beautiful world that are simply amazing and must be seen. 1. Located about 100 miles north of Reno, Nevada, is the tiny town of Gerlach. The most striking aspect of the Fly Geyser is its vibrant colors, which are caused by thermophilic algae. 2. The Ice Castles in Silverthorne are man-made ice formations created by Utah’s Brent Christensen. 3. This waterfall is very famous in Tuscany because is an open-air free hot spring. The waters of Saturnia Therme are sulphureous-carbonic-sulphate-bicarbonate-alkaline. 4. Neuschwanstein Castle is a 19th-century Romanesque Revival palace on a rugged hill above the village of Hohenschwangau near Füssen in southwest Bavaria, Germany. 5. The Sagano Bamboo Forest is one of Japan’s national treasures. 6. 7. 8. 9. 10.

Capture the City Photo Competition: the winner – Lonely Planet blog When we launched the Capture the City photo competition, we weren’t sure how travellers would respond. After sorting through over 2500 beautiful entries we now know the answer: everyone who entered aimed to make our job of picking a winner as difficult as possible. There just were too many great photos to get our heads around from cities big and small all over the globe, many that we could easily imagine as covers of Lonely Planet city guidebooks. Some were classic images of famous landmarks, while a surprising number showed sides to cities you rarely if ever see. Other photos came from cities we don’t publish standalone guidebook for, but were so gorgeous it made us wish we did. We chipped and whittled and hacked away at the list until we had the best of the best, and now – at long last – we’re ready to announce the winner. And among these, who won? Congratulations to Brice, and many thanks to everyone who entered the competition for sharing your best city photos with us all!

15 Most Magical Places in the World Want to share the magic? Tweet or Stumble this article! Wizards, sorcerers, hobbits and goblins. This maybe the stuff of fairy-tales but you can bring magic to life! Visit these breath-taking magical destinations and live out your own travel legend! Travel and make-believe certainly go hand in hand. Whether it’s royal palaces, enchanted forests or magical lagoons, traveling the world can bring your favorite fairy-tales to life! So grab your wand, mount your white horse and take a virtual journey through the 15 most magical places in the world! 1. Pear Biter 2. Fugue 3. pasotraspaso 4. Magical-World 5. Panoramas 6. nutbird 7. robwest jmhullot 9. net_efekt 10. RebelXTious 11. Tambako the Jaguar 12. Macieklew 13. Germanium 14. jurvetson 15. Magical-World Been to any of these places? Post up your comments! Liked this post? Don’t miss out on more magical places, sign up for free article updates below… *(I’d be the Snow Queen!)