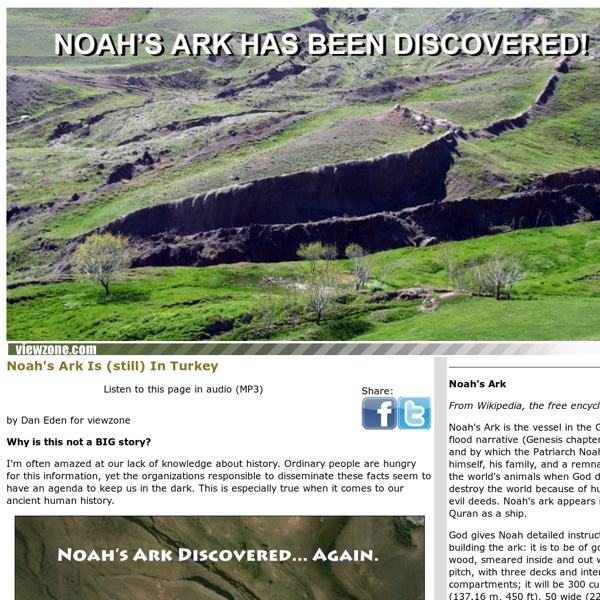 Listen to this page in audio (MP3) by Dan Eden for viewzone Why is this not a BIG story? I'm often amazed at our lack of knowledge about history. Ordinary people are hungry for this information, yet the organizations responsible to disseminate these facts seem to have an agenda to keep us in the dark. I won't hold you in suspense with this article: The Ark of Noah has been found. How it was discovered In 1959, Turkish army captain Llhan Durupinar discovered an unusual shape while examining aerial photographs of his country. This mountainous land was originally part of the Kingdom of Armenia, a country that is thousands of years old and often considered the "first Christian nation", until the Turks took it over at the beginning of the 20th Century. Capt. Brandenburger was responsible for discovering the Cuban missile bases during the Kennedy era from reconnaissance photos, and after carefully studying the photo, he concluded: "I have no doubt at all, that this object is a ship. When Dr. Related:  Mysteries/History/Discoveries • Archaelogical

18 Strange Giant Skeletons Found In Wisconsin: Sons Of God; Men Of Renown Here's one for your "Forbidden Archaeology" file.Scientists are remaining stubbornly silent about a lost race of giants found in burial mounds near Lake Delavan, Wisconsin, in May 1912. The dig site at Lake Delavan was overseen by Beloit College and it included more than 200 effigy mounds that proved to be classic examples of 8th century Woodland Culture. But the enormous size of the skeletons and elongated skulls found in May 1912 did not fit very neatly into anyone's concept of a textbook standard. They were enormous. Strange Skulls First reported in the 4 May 1912 issue of the New York Times the 18 skeletons found by the Peterson brothers on Lake Lawn Farm in southwest Wisconsin exhibited several strange and freakish features. Their heights ranged between 7.6ft and 10 feet and their skulls "presumably those of men, are much larger than the heads of any race which inhabit America to-day." " One must wonder how much can they lift if twice the size of a average human today? Kristan T.

The Secret City on the Peloponnese Rock (22 Pics) It just looks like a big old dry rock, doesn’t it? No visible signs of humanity on its barren landscape. Impressive, but not much to it. We should probably just keep going…. Drive along the coast of the mainland, through the small port village of “new” Monemvasia, and yep– it still looks like a giant empty rock. Over the causeway from the mainland and a whirl round to the South side of the islet, we reach the end of the road, facing a medieval archway into darkness. Through the ancient passageway (no cars allowed) and we come out on the other side to find this cobblestone path at the heart of the town leading to some local restaurants, bars and shops. 10 Forgotten Ancient Civilizations History The typical history textbook has a lot of ground to cover and only so many pages to devote to anything before Jesus. For most of us, that means ancient history is a three-dog show—Egypt, Rome, and Greece. Which is why it’s easy to get the impression that, outside of those three, our map of the ancient world is mostly just blank space. But actually nothing could be further from the truth. 10Aksum The kingdom Aksum (or Axum) has been the subject of countless legends. The Ethiopian kingdom of reality, not myth, was an international trading power. Aksum adopted Christianity not long after the Roman Empire did and continued to thrive through the early Middle Ages. 9Kush Known in ancient Egyptian sources for its abundance of gold and other valuable natural resources, Kush was conquered and exploited by its northern neighbor for nearly half a millennium (circa 1500–1000 B.C.). In the ninth century B.C., instability in Egypt allowed the Kushites to regain their independence. 8Yam 5Yuezhi

Top 10 Civilizations That Mysteriously Disappeared Throughout our history, most civilizations have either met a slow demise or were wiped out by natural disasters or invasion. But there are a few societies whose disappearance has scholars truly stumped: 10. The Olmec One of the first Mesoamerican societies, the Olmec inhabited the tropical lowlands of south-central Mexico. Where did they go? Around 400 BC the eastern half of the Olmec’s lands was depopulated- possibly due to environmental changes. 9. The Nabateans were a Semitic culture that inhabited parts of Jordan, Canaan and Arabia from around the sixth century BC. During the fourth century AD, the Nabateans abandoned Petra and no one really knows why. 8. The Aksumite Empire began in the first century AD in what is now Ethiopia and is believed to be the home of the Queen of Sheba. According to local legend, a Jewish Queen named Yodit defeated the Aksumite Empire and burned its churches and literature. 7.The Mycenaeans 6. 5.The Cucuteni-Trypillian Culture 4. 3.The Minoans 2.The Anasazi 1.

17 Mysteries Awaiting Explanation On August 7th 1999, London police received more than 36 reports of a gigantic sea serpent in the Thames. It was “at least 200 ft long and 5 yards across,” said one panicky witness. Despite all the sightings, no one managed to get a picture—or so it was thought. Stone sculpture depicting a Vimana, flying machines in ancient India (1200 b.c.), Many Sanskrit epics, which were written in India more than two millennia ago, contain references to mythical flying machines called vimanas. Project Avalon – Klaus Dona: The Hidden History of the Human Race On the big cup you can see a perfect inlaid star constellation also showing the Orion and other stars. Mystery rock from Earth or alien spaceship? The Bob White Object: In 1985, Missourian Bob White recovered physical evidence following a UFO encounter in Colorado. An 80 ton boulder on the side of Hidden Mountain in New Mexico bears a puzzling inscription. The Mysterious Cones of the Egyptian Desert Chinese Pyramid in Xianyang.

These Ancient Elongated Skulls Are NOT HUMAN Are you ready to be confronted with evidence that will directly contradict the version of “world history” that you were taught in school? In recent years, hundreds of extremely bizarre skulls have been discovered all over the planet. Scientific tests that have been conducted on some of them conclusively prove that these ancient elongated skulls are NOT HUMAN. Many people are not able to accept what you are about to see because it is too radical for them. Down in Peru, particularly on the Paracas peninsula, researchers have been finding some very large elongated skulls that are extremely ancient. Another specimen with red hair was just recently discovered. These elongated skulls are much, much larger than normal human skulls would be. In addition, these skulls have quite a few other important physical characteristics that greatly set them apart from normal human skulls. Examiner: In a recent video, “Alien Hybrid Human Baby Found In Peru? What about you? About the author: Michael T.

Lost Years Of Jesus The unknown years of Jesus (also called his silent years, lost years, or missing years) generally refers to the period between Jesus's childhood and the beginning of his ministry, a period not described in the New Testament.[1][2] The phrases "lost years of Jesus" is usually encountered in esoteric literature (where it at times also refers to his possible post-crucifixion activities), but is not commonly used in scholarly literature since it is assumed that Jesus was probably working as a carpenter in Galilee from the age of twelve till thirty, so the years were not "lost years", and that he died in Calvary.[2][3][4] The use of the "lost years" in the "swoon hypothesis" suggests that Jesus survived his crucifixion and continued his life.[10] This, and the related view that he avoided crucifixion altogether, has given rise to several speculations about what happened to him in the supposed remaining years of his life, but these are generally not accepted by mainstream scholars.[10][11][12]

Self Efficacy: Why Believing In Yourself Is So Important When facing a challenge, do you feel like you can rise up and accomplish your goal or do you give up in defeat? Are you like the famous little train engine from the classic children's book ("I think I can, I think I can!), or do you doubt your own abilities to rise up and overcome the difficulties that life throws your way? The concept of self-efficacy is central to psychologist Albert Bandura’s social cognitive theory, which emphasizes the role of observational learning, social experience, and reciprocal determinism in the development of personality. According to Bandura, a person’s attitudes, abilities, and cognitive skills comprise what is known as the self-system. What Is Self-Efficacy? According to Albert Bandura, self-efficacy is "the belief in one’s capabilities to organize and execute the courses of action required to manage prospective situations." The Role of Self-Efficacy People with a strong sense of self-efficacy: People with a weak sense of self-efficacy: 1. 2. 3. 4.

Polish Vampires Might Have Been Saved With Clean Water They were found buried with sharp farm sickles across their necks so their heads would be cut off if they tried to rise from the dead. Some had heavy rocks placed under their chins so they couldn’t open their mouths to bite a living person and pass on to them whatever it was that turned them into strange, frightening creatures and caused their quick, horrible and mysterious deaths in 17th century Poland. Were they truly vampires? New research suggests these poor souls were instead the first victims of a cholera epidemic. The six vampire graves were found in a cemetery in Drawsko Pomorskie, a town in northwest Poland. This skeleton was found with a rock holding the jaw shut to keep it from biting another victim. The team studied strontium isotopes in the molars of the suspected vampires and found the ratios were the same as those of other skeletons and animal bones, proving they ate the same foods and drank the same water, making them local residents. Vampires fear holy water.

Unsolved World War I mystery ROANOKE RAPIDS, N.C. – On March 15, 1929, a grieving Virginia mother filed an “Application for Headstone'' with the War Department for her recently deceased son, John M. Cain, a veteran of World War I. She lived in Norfolk, Va., and her son was lying nearby in an unmarked grave, she attested. A picture of the headstone was posted May 7 on the Johnson Hawkins Family History Group Facebook page by Fred Hawkins, who reportedly has ties to the Roanoke Valley. Roanoke Rapids history buff Cindy Garris Boone said she is also a member of that Facebook group. It appears to be a marble headstone, about a foot wide and maybe four feet high. “It's been here awhile,'' Boone said. Cain doesn't appear to have any ties to the Roanoke Valley. In shaky handwriting, the mother signed her name, “Adeline Howard,'' and her address was given as 425 Queen St. in Norfolk. The application shows it was confirmed, approved and the stone ordered. Why would Cain enlist just as the war was ending?