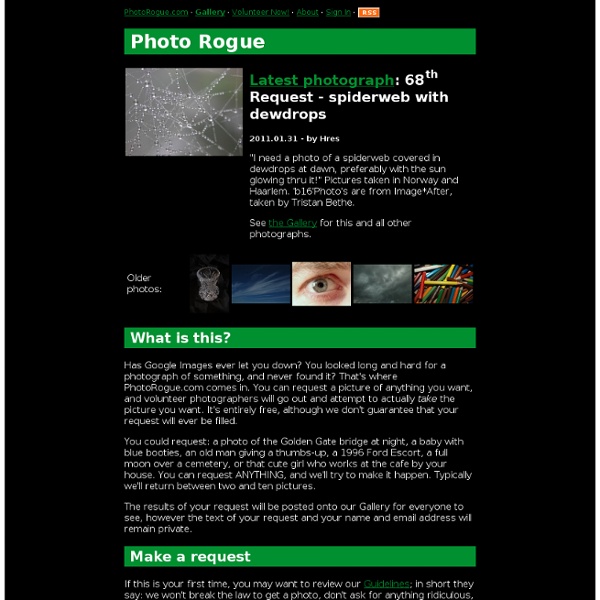 unprofound.com : royalty free photography project - a public domain stock photo collaboration Stockvault Download Free Photos &amp; Images, Stock Photography - FreePixels.com openphoto.net home to 15659 images openphoto Huge List of Free Stock Photography Sites on The Net : Graphic Design Blog &amp; Graphics News Blog Today, our blog is about finding free stock photography & images on the Internet. We have compiled a large list of websites that allow you to use the images on their site for free. Most of the below resources, are large compilations of photos that are both searchable and browsable. Huge List of Free Stock Photography on the Internet - Great List For Graphic Designers and Web Designers Hello All. Free Use images could mean copyright-free / public domain images, or images where the photographer has given permission that the images can be used free of charge. An example of a restriction to using a free image is as follows: Free for Educational or Personal Use: You can use the image on your personal print projects, your website, in a school project, as desktop wallpaper, frame it and hang it on a wall. Click on this Link For a list of articles about Stock Photography, Finding Free Images on the Internet, Royalty Free Images, and much more. Barry’s Free Photos - Free Stock Photos“¦.

Free Photo - Cepolina Photos Royalty Free Icons & Clipart Stock Images Twitter Reveals Most Discussed Topics of 2009 One of the best aspects of Twitter is that it has become a central nexus for discussion of the topics of the day. Twitter is quickly becoming the world's water cooler, making it a useful tool for figuring out what's being discussed across the world. Twitter's Trending Topics are especially useful, as they highlight whether the Twitterverse is talking about Tiger Woods, the Mashable #openwebawards or Santa at this very moment. Just a short time ago, Twitter released new data on the top trending topics of 2009. It's a collection of the most discussed news events, people, movies, TV shows, technologies, sports and hashtags from the last 12 months. While some of the rankings won't come as a surprise (e.g. The full list, which we are reprinting below from Twitter's blog post, is a unique and interesting insight into what trended in our culture.

Free Pictures - FreeFoto.com Facebook Unveils Most-Mentioned Topics of 2009 Last week, Twitter revealed its list of the most-discussed topics of 2009, based on Twitter's trending topics. Now Facebook has come out with their own list, based on data from the millions of daily status updates of its users. While the world's largest social network took a different approach than its upstart competitor (explanation below), it did match some of Twitter's "most discussed" topics of 2009. However, it seems as if Facebook's data analysis has revealed that people care a great deal about family (#5), Facebook apps (#1), Lady Gaga (#12), and, yes, even Twitter (#10). First, How Facebook Performed the Analysis Dubbed Facebook Memology, the company analyzed one- to four-word phrases within the Facebook status updates of 2009. Facebook's explanation: "To generate the list, we started by looking at how many times each phrase with length from one-to-four words occurred in U.S. The Top Facebook Topics of 2009 One of the more interesting trends is family, which came in at number five.

Pixel Perfect Digital - Latest Photography News How to shoot photos for stock photography websites - by Kaarina St. John Helium01's image for: "How to Shoot Photos for Stock Photography Websites" Caption: Location: Image by: Stock photography is a growing place where anyone with a four megapixel, or larger, camera can compete for the dollars spent by designers and artists. A stock photo is simply a photo (the simpler the better) of everyday things and people. The photographer that produced the image that she downloaded then receives fifty cents or a dollar. Stock photos generally follow these guidelines: 1. 2. 3. 4. 5. If you think about it, that is pretty much the recipe for endless work. Sharp shadows are to be avoided. Stock photography websites won't accept every photograph that you submit and you won't sell every photo that is accepted, but if you produce enough acceptable work it will begin to sell eventually. To find a place to display your work, just do an Internet search for stock photography websites and you'll find plenty. If your work is good, you will find a place for it.