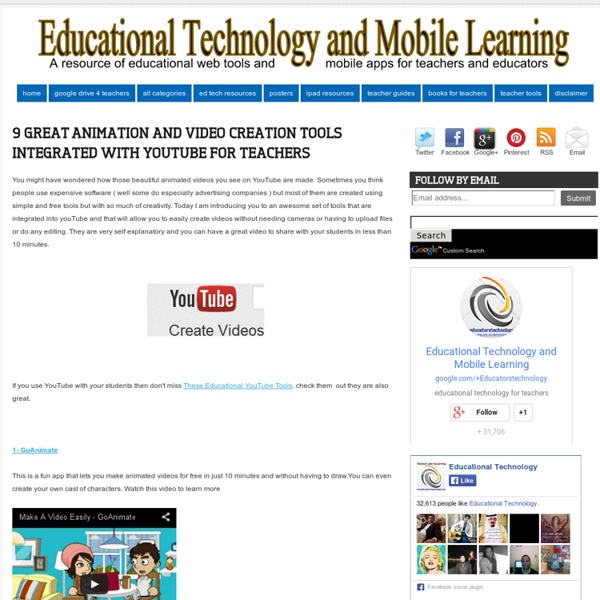 You might have wondered how those beautiful animated videos you see on YouTube are made. Sometimes you think people use expensive software ( well some do especially advertising companies ) but most of them are created using simple and free tools but with so much of creativity. Today I am introducing you to an awesome set of tools that are integrated into youTube and that will allow you to easily create videos without needing cameras or having to upload files or do any editing. They are very self explanatory and you can have a great video to share with your students in less than 10 minutes. If you use YouTube with your students then don't miss These Educational YouTube Tools. check them out they are also great. 1- GoAnimate This is a fun app that lets you make animated videos for free in just 10 minutes and without having to draw.You can even create your own cast of characters. 2- WeVideo 3- Vix-Video effects and text 4-Xtranormal Movie Maker 5- Stupeflix Video Maker 6- Vbop

Free Technology for Teachers Movie Looks HD Edgaged 8 Steps to Creating Accessible Video Photo: drinksmachine Video is great. It can help you get your message across quickly, entertainingly, and provide a bit of character. What’s more, recent statistics show that video makes up approximately 65% of all search results, so it’s definitely an area you need to be thinking about! Google really likes video, but it likes accessible video even more. The theory is that video takes longer to produce than web content and therefore is ranked higher by Google. Photo: Fred Benenson Videos that include captions means that double the number of people will finish watching your video (from 40% up to 80%) – and remember your search ranking is directly related to how long people spend on your site. LiveClicker found that pages with transcripts earned 16% more revenue than pages that just had video-only content. The catch, though, is that while simple text is pretty easy to make accessible so long as you don’t do anything too crazy, video is rather more complicated. So what can you do? Photo: ntr23

Making a film - Learn about film How do you make a movie that people will want to watch? The secret is to plan it, keep it short, and keep it simple. Don’t be impatient: follow your plan and take the time to get things right. Follow these ‘rules’ to help make your first film a success. 1 Build your skills. Once you’ve got your equipment, learn how to use it and find out what it can do. 2 Watch other people’s films. Quentin Tarantino famously said “People ask me if I went to film school. 3 Get organised. Follow an organised filmmaking process. 4 Keep it short and simple. Have you got a strong idea? Keep it short: most beginners’ films could be improved by halving their length. 5 Shoot separate shots. Learn about what the different shot sizes are for. 6 Get the sound right. Sound is vital. 7 Edit it right. Don’t think of editing as a chore: it’s not about just getting rid of the bad stuff, it’s where your film will really come together. © Tom Barrance Got a question?