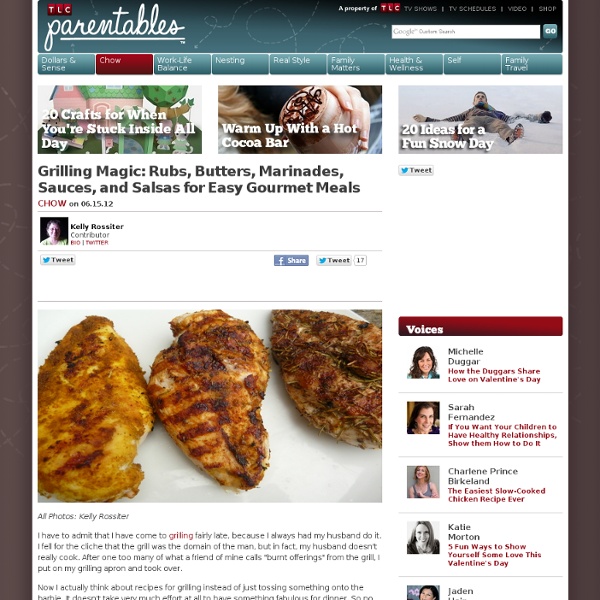 All Photos: Kelly Rossiter I have to admit that I have come to grilling fairly late, because I always had my husband do it. I fell for the cliche that the grill was the domain of the man, but in fact, my husband doesn't really cook. Now I actually think about recipes for grilling instead of just tossing something onto the barbie. 1. It doesn't get any easier than using a spice rub to make your chicken, steak or pork tenderloin fantastic. Cajun Spice Mix: 3 tbsp dried thyme; 2 tbsp each paprika and packed brown sugar; 1 tbsp each ground cumin, dry mustard and hot pepper flakes; 1 tsp salt. Bombay Spice Mix: 3 tbsp each ground coriander and turmeric; 2 tsp ground cumin; 1 tsp salt; 1/2 tsp each cayenne pepper and dry mustard. Mediterranean Spice Mix: 3 tbsp dried rosemary; 2 tbsp each ground cumin and coriander; 1 tbsp dried oregano; 2 tsp cinnamon; 1/2 tsp salt. Mix the spices and then rub them onto the meat (or tofu!) The finished product below. 2. 3. 4. 5. I loved this salsa verde.

Butter Roasted Chicken I’ve roasted many a chicken in my time. Many. First because it’s one of the most delicious meals you can serve your family. I had really never thought that there might be a better method for roasting a chicken until I saw one being done this way on a recent episode of French Food at Home on The Cooking Channel. For this recipe, you want a chicken that’s about 4 pounds. Now take your fresh herbs and stick them…well, you know where they go… And push those lemon wedges in there, too. Now place the chicken on its left leg in a roasting pan or an large cast iron skillet. Enjoy! A succulent roasted chicken scented with lemon and fresh herbs and basted with butter. Ingredients 1 whole chicken, about 4 pounds Salt and pepper Fresh herbs – my favorite combination is tarragon, thyme, rosemary and sage 1 lemon, quartered ¼ cup butter (1/2 stick) Instructions Preheat the oven to 400 degrees. What I was writing about…

Beer Pancakes | stetted Pancakes are a staple in our house. It doesn’t hurt that we smother them in real Wisconsin maple syrup, but there’s just something about pancakes that make people happy. Beer also makes people happy, but in a different way. If ever you run out milk and your kid is attaching himself to your leg because you promised pancakes – you promised, just grab a beer from your stash and make these. Beer: It’s what’s for breakfast. If you aren’t a pancake person, check out my Beer Cheddar Waffles – great for game-day noshing! Ingredients 1 1/2 to 2 cups flour (depending on how thick you like your ‘cakes) 2 eggs 12 ounces beer, such as New Belgium Mothership Wit 2 tablespoons pure maple syrup Instructions Beat eggs in a small bowl, then add eggs, syrup, and beer to flour. Note: Yes, it’s true that not all of the alcohol in the beer will burn off in the cooking process. Disclaimer: I created this recipe as part of my involvement with the Foodbuzz Tastemakers Program.

Restaurant Style Orange Chicken Alright you guys, seriously, this orange chicken tastes exactly like the best orange chicken you’ve ever had at any restaurant. I was very, very, very skeptical at first because I’ve never fried meat before and I was afraid it would turn out terribly. Kramer was adamant about having me make orange chicken that would remind me him Chinese take-out, though, and I couldn’t let him down! It was perfectly crispy and crunchy and the sauce was right on point; sweet and tangy and with a little bit of heat. I honestly can’t emphasize how good this orange chicken is. You won’t be able to stop eating it, and it heats up great in the microwave as leftovers the next day. Your ingredients. Mix together the chicken, egg, salt, pepper, and 1 tablespoon of canola or vegetable oil, then add in 1/2 cup of cornstarch and 1/4 cup all-purpose flour. Heat enough vegetable or canola oil in a pot or a wok (about an inch deep in the pot) for about 5 minutes over high heat. In one more bowl, zest your orange.

How to Cook a Steak Perfectly Every Time I don’t consider myself much of a “steak and potato” guy. If I were in a situation where I was forced at gunpoint to self-identify using only pairings of disparate foods, I would describe myself as more of a “chorizo and cheese” kind of fella. I would also have to reconsider the life choices that led to me having to negotiate my way out of a gunfight using descriptive language about meat. But that’s neither here, nor there. You see, it’s not often that I get the urge to throw a charred piece of meat on a plate, growling and grunting, eating the meat with my bare paws. That craving may not strike often, but when it does, sweet mercy, I want it to be perfect. First, select a good cut of meat. Unwrap your steak, and allow it to come to room temperature. On the stovetop, heat a cast iron skillet over high heat. Allow to cook over high heat for exactly two minutes. Using tongs, transfer your steak from the oven to a cutting board. Got it?

Brown Ale and Cheddar Soup Okay, so it’s possible that this isn’t the kind of meal you eat before you do anything too strenuous, like run headlong into a burning schoolhouse to save dozens of screaming orphans. It’s probably not the kind of thing you want to have for dinner the night before your first day in basic training for the Marines. It may not be the kind of meal you settle down to the night before you run the New York City Marathon. It’s probably not an ideal meal for anyone looking to tackle a pre-dawn jog. It’s definitely not for anyone with any aspirations to, let’s say, make it into work on time. Why is that? Use the best cheddar you can buy, since it’s such a major player in this soup, along with a decent brown ale, like Newcastle, or a pale ale like Bass. Brown Ale and Cheddar SoupAdapted from a recipe from Food and Wine Ingredients: Method: 1. 2. 3. 4. 5. 6. 7. 8. 9. 10. 11.

How to Make Proper Barbecue Chicken There's a lot of misconception when it comes to "barbecue." The problem is the word itself. It's used as a synonym for grilling, refers to the grill itself, or to the meat being grilled; it also has a sauce named after it; and sometimes it's just the word for the party itself held outdoors in somebody's backyard. What, actually, is "barbecue"? American purists see things a little differently. To them, "barbecue" is a wonderful Southern tradition of slow-cooking with indirect heat and woodsmoke to transform cuts of meat, often inexpensive ones, into succulent, unbelievably delicious results. Which brings us to barbecue chicken, a staple of the summer grill. The sad fact is that often times the answer is no. The problem, and the result, is charred all over the place, a crapshoot for succulence, often dry and sad. I believe good barbecue chicken is low and slow followed by fast and hot; that's the easiest way to achieve fantastic results. (makes 2 cups) Now, the chicken.

Bacon Cheeseburger Chicken Bacon Cheeseburger Chicken is definitely in the Top 3 Favorite Meals Ever according to Kevin. :) I like it too, because it’s easy way to amp up boring chicken breasts into an exciting, mouth-watering meal. :D Intrigued? Let’s get started. :) First, let’s start by making our own bacon bits. Let me pass along her words of wisdom. Arrange the bacon in a single layer in a large skillet over LOW to medium-low heat. Okay! In the skillet you used to fry the bacon, you have some bacon grease. Preheat your oven to 350, and spray a 9×13 or 8×8 baking dish with Pam (depending on how much chicken you have, if you use more than 2 breasts, go with the 9×13). Take a few boneless, skinless chicken breasts and cut them in half, right down the middle, and put them in the skillet. Sear 4-5 mins each side until lightly browned. With both sides of the chicken are browned, remove from skillet and place in baking dish that has been sprayed with Pam. Now it’s time to make our bacon bits! Back to the chicken.

22 Ways To Get Your Vegan Snack Attack On It must be snacking season because I’ve had a lot of emails lately asking for some healthy vegan snack ideas and I thought it was a great idea for a post. Many of the recipes below are also some of the most popular snack recipes of 2011, so I will also add this post to my Top Recipes of 2011 page for easy reference. Ready to get your vegan snack attack on? 1. Endurance Crackers My all-time favourite cracker and quite possibly one of the top 3 recipes so far in 2012. 2. Enjoy this ultra-creamy, thick, and energizing smoothie, with a hint of orange that will help keep those cold bugs at bay! 3. Love dipping your finger into a bowl of cake batter? 3. Just like my favourite salt and vinegar chips, but better. 4. Incredibly easy to make. 5. Growing up, I always loved strawberry nutri-grain bars. 6. Adapted from the lovely Heather, this almond butter is the best thing to pair with a juicy apple or drizzled over fruit. 7. 8. 9. 10. for the rest click the link to continue… 11. Simple. 12. 13. 14.

Sweet Chilli Fried Chicken with French Beans It wasn't until I came to Sydney that I was introduced to Thai sweet chilli sauce, which is widely used not only as a dipping sauce but for seasoning and various stir-fries. I hardly recall using or coming across sweet chilli sauce in Singapore or Malaysia, probably because we prefer our chillies to be hot rather than sweet. However, it does make a very delicious coating for deep-fried chicken. Of course, you could just dip the fried chicken in the sauce separately, but tossing everything together allows time for the sauce to absorb into the crunchy batter on the chicken. The french beans in the dish are also lovely with that sweet chilli sauce and adds a bit of texture to the dish. I wanted to add some acidity to the sweet chilli sauce to cut through some of that sugary sweetness, and so I added some Sambal Oelek (I used Thai sambal oelek which is sharp-tasting and vinegary) to it. Sweet Chilli Fried Chicken with French Beans Ingredients Method Wash the french beans and pat dry.